Old people say the darndest things, don’t they? Take Georg Baselitz for example. At seventy-five, he’s one of the uber-macho Neo-Expressionist painters that dominated contemporary art back in the 1980s. That old boys’ club was famous for their leather jackets, cocaine parties with hookers, living lavish lifestyles (Baselitz lived in a castle for the past thirty years), and in the end one of them, Martin Kippenberger, even drank himself to death at the age of forty-four.

Now, in an interview for the German magazine Der Spiegel, Baselitz has struck a nerve by saying that he believes women just don’t make good painters. And that’s just how it is. 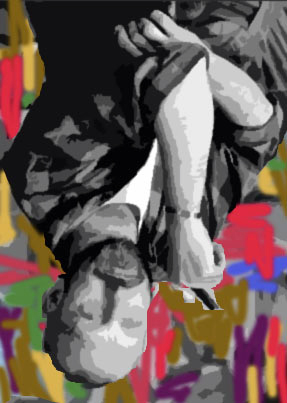 The interviewers try to get some clarification, but from reading the whole three page interview, I can’t tell if he is simply complaining about a lot of things, if he just has a strange sense of humor, or if he is indeed a sexist pig.

Unfortunately it’s that kind of humor where you don’t know if he is saying what he really thinks — or if he is just trying to upset/engage/enrage the interviewers.

Since the interview was published a number of articles have appeared confirming he is indeed a sexist, misogynistic throwback or something like that. But to me it all seems a little bit too easy. In fact, I wouldn’t be surprised by some sort of public apology in the near future. That’s how these things usually go.

It just all seems too much like the familiar media script where the celebrity says/does something outrageous, the press goes wild, and in the end it was all part of a marketing plan. Everybody loves a redemption story. Just ask Miley Cyrus, Kanye West, Eminem, or Lindsey Lohan.

O.K. so is he a sexist, misogynistic throwback or isn’t he? Or is he being a pig just to get attention?

Here is the full article — it’s in three parts.

Here is the key excerpt:

Spiegel: The market only embraces a few women. There are hardly any women among the most expensive artists.
Baselitz: Oh God! Women simply don’t pass the test.
Spiegel: What test?
Baselitz: The market test, the value test.
Spiegel: What’s that supposed to mean?
Baselitz: Women don’t paint very well. It’s a fact. There are, of course, exceptions. Agnes Martin or, from the past, Paula Modersohn-Becker. I feel happy whenever I see one of her paintings. But she is no Picasso, no Modigliani and no Gauguin.
Spiegel: So women supposedly don’t paint very well.
Baselitz: Not supposedly. And that despite the fact that they still constitute the majority of students in the art academies.
Spiegel: It probably isn’t a genetic defect.
Baselitz: I think the defect actually lies with male artists. Male artists often border on idiocy, while it’s important for a woman not to be that way, if possible. Women are outstanding in science, just as good as men.
SPIEGEL: Women certainly aren’t as loud and obtrusive when it comes to how they present themselves. With its desire for the sensational, the market isn’t very forgiving of that.