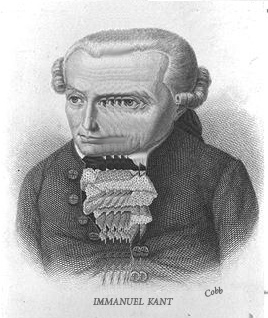 Immanuel Kant was a German philosopher who is widely considered to be a central figure of modern philosophy. He argued that human concepts and categories structure our view of the world and its laws and that reason is the source of morality.

In the Russian town of Rostov-on-Dongot, two men got into “a passionate argument” about Immanuel Kant’s philosophical theories and the argument quickly escalated into a fistfight and then a shooting. Apparently, just as it seemed the brawl was over, one of the men pulled out a pistol and shot the other.

Police said the men had been waiting in line for beer at an outdoor festival when the conversation turned violent.

Fortunately, the victim was only lightly wounded because the handgun had fired rubber bullets — but even so, he still had to be taken to the hospital.

A Russian news article added that the assailant could face up to ten years in prison for the assault, which is probably just enough time to get through Kant’s Critique of Pure Reason.

In case you’ve never read it before, here are some interesting, if somewhat out of context, quotes from Critique (a.k.a. fighting words):

Space and time are the framework within which the mind is constrained to construct its experience of reality.

Whereas the beautiful is limited, the sublime is limitless, so that the mind in the presence of the sublime, attempting to imagine what it cannot, has pain in the failure but pleasure in contemplating the immensity of the attempt.

Out of the crooked timber of humanity, no straight thing was ever made.