I Am Here: Daniel Schifrin on Beyond Belief

Beyond Belief: 100 Years of the Spiritual in Modern Art, jointly organized by SFMOMA and the Contemporary Jewish Museum (CJM), is on view at the CJM through October 27. Open Space presents a series of writings on works in the exhibition. In today’s post Daniel Schifrin, part of the CJM curatorial team, reflects on the exhibition as a Talmudic journey. 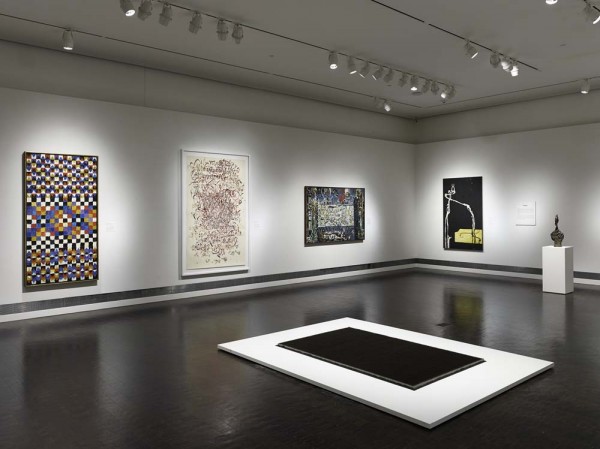 When our two institutions — the Contemporary Jewish Museum (CJM) and SFMOMA — began developing an exhibition exploring art from SFMOMA’s permanent collection, the initial idea was to focus on Jewish artists like Mark Rothko, Barnett Newman, and Wallace Berman, whose work was central to twentieth-century art and who drew on powerful currents in Jewish tradition. Much of this conversation focused on the overlap of Jewish artists and abstract art, since abstraction proved a stable bridge connecting art and the Jewish prohibition against idolatry.

What evolved was a larger and looser structure that asked questions about how the process of making and responding to art paralleled the spiritual journey, with a special emphasis on how Jewish ideas might serve as a link between art and spirit.

For instance, what does it mean for Jackson Pollock’s Guardians of the Secret (1943), a key early work begging for psycho-spiritual interpretation, to hang near Wallace Berman’s sculpture Untitled (400.300.50) (1974) alluding to the Jewish mystical interpretation of letters called Gematria? How would the high priest of Abstract Expressionism (not Jewish) and the Beat rabbi of midcentury American art engage in conversation? And could they?

What gave me confidence in this conversational, even argumentative approach was the Talmud — the ancient Jewish book of laws and stories that, contrary to what many think, is not a rigorous collection of legal opinions but a chaotic, multidimensional dialogue that connects people and ideas across centuries. This book’s logic is the logic of real life — organic, messy, evolving, surprising. Its goal is to provoke the sharper, more relevant next question, with the expectation that the conversation will continue soon and with even greater vigor.

I don’t want to mischaracterize the Talmud (or Talmuds, for there are actually two discrete canons) as being a postmodern document, concerned only with the reality of the reader, or what Gilles Deleuze and Félix Guattari famously described as a “rhizome”: that which “has no beginning or end; it is always in the middle, between things.” The larger Talmudic enterprise was to find clarity for a scattering people who were struggling with multiple sources of authority. Who got to decide, for instance, whether a newly discovered grain was legitimate to eat on Passover? What laws could you jettison if your life was in danger? Or — among my favorites — was the juice inside of a grape a separate entity or part of the grape itself? 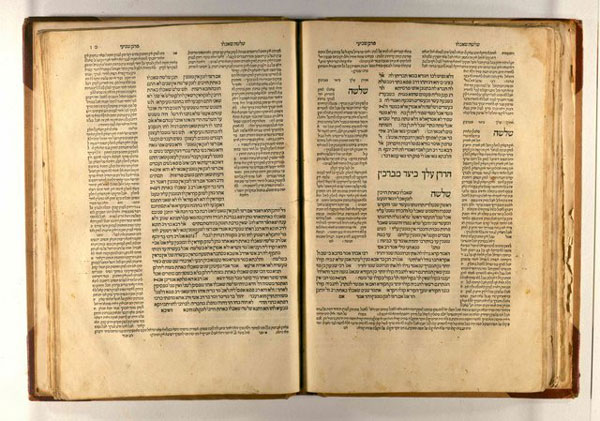 And yet, as the last example suggests, the experience of the Talmud is one of constant, radical questioning, pushing the imagination to consider options and angles that on the surface seem absurd. In an art institution dedicated to conversation and interpretation, from the framing of exhibitions to the philosophy of gallery tours, no question — as long as it respects the value of art and the dignity of civilized discourse — should be considered irrelevant. The Talmud approves of this approach, going out of its way to preserve minority opinions.

Then there is the structure of the Talmud’s individual pages, which presents blocks of texts across multiple centuries, languages, and styles. In the center is the oldest, Hebrew text; swirling around it are commentaries, and commentaries on commentaries, that challenge and complicate one another. This visual style rejects simplicity or easy philosophical, theological, or legal pronouncement; if you want a quick answer to a question, go elsewhere.

Each of the exhibition’s ten sections, such as Hidden and Revealed or The World to Come, echoes the pedagogical and visual approach of the Talmud. Take The Secret Language, in which Pollock and Berman sit in conversation with Rothko, Shahzia Sikander, and Alfred Jensen. The Talmud demands that multiple, often conflicting voices be heard simultaneously and studied in community. In the gallery, artworks that would ordinarily be segregated by genre, time period, or biography are presented together, with space for visitors to reflect and debate.

Sir Nicholas Serota, director of the Tate Galleries in England, recently said that he saw the function of museums as “a series of arguments, rather than simply a collection of pictures.” And although “argument” is too loud a word for what we hope to happen in the galleries, the idea is that moving from one room to the next is like turning a page in the Talmud and entering the next stage of the conversation.

The sense of boisterous dynamism that jumps out from a page of the Talmud and that can be literally heard in Yeshiva study rooms around the world is balanced in Beyond Belief with a counter-trend in Jewish culture: the injunction to sit still and notice the potential revelation right in front of one’s eyes. Asking visitors to pause, be present, and consciously mark the next stage on their artistic journey is the task of iPads placed between clusters of rooms, which flash simple questions such as “What inspires you?” or “How do you seek solace in the face of loss?” then offer potential answers from artists represented nearby.

Although the iPads mimic the multivocal nature of a Talmud page, their deeper inspiration is the mezuzah — the ornament containing biblical verses affixed to the doorways of Jewish homes. Traditional Jews stop and acknowledge the presence of the mezuzah when they enter or leave a home, building, or room, a life-long spiritual check-in.

This idea of being present — found in most, if not all, religious traditions — has a strong claim to being at the center of the spiritual condition. In Judaism, one of the names of God is Ha Makom, translated as The Space, or The Presence. Similarly, in the Bible, God engages in a call-and-response with several personages, especially Moses. “Where are you?” God asks. “Hineni,” they answer. I am here; I am present. The highest spiritual quality for biblical figures, by extension, is the capacity to be present with God, Spirit, The One — however he/she/it might be defined. 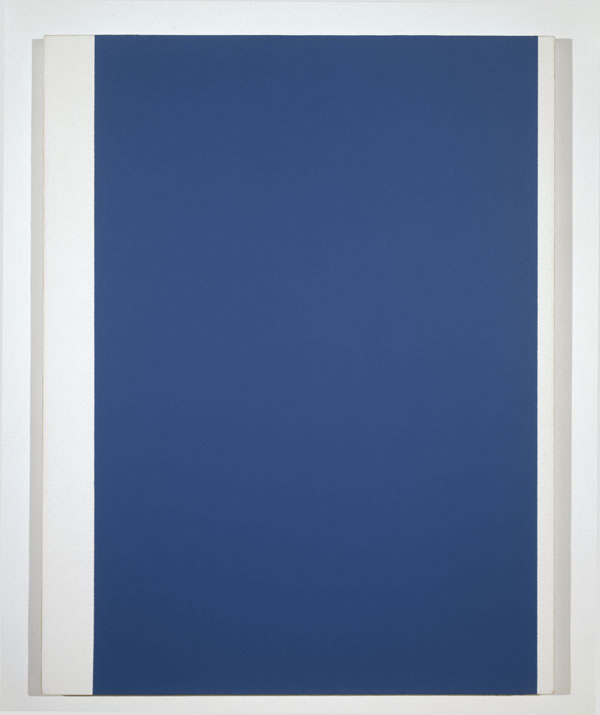 For me, the blending of artistic and spiritual presence in Beyond Belief comes together most profoundly in the aching blue of Barnett Newman’s painting Untitled 1, 1970 (1970). Considered the artist’s final completed work, the last stop on a long artistic journey, Untitled continues the mystery of Newman’s “zips,” or thin lines separated by blocks of color.

It’s unclear why Newman, a pioneer of Abstract Expressionism and Color-field painting, chose this particular shade for his last canvas. But one wonders if there might be a connection to a mysterious color mentioned in the Bible, tekhelet, which adorned the fringes of the ancient priestly robe and Jewish ritual prayer garment (tallit). Although scientists and scholars continue to quest for the biblical “sea snails” whose bodies created this color, its presence in the real world has eluded searchers for thousands of years.

Standing in front of Untitled, I saw the sacred residue of Newman’s blue-tinted spiritual vision. I wanted desperately to see what he saw, to be present with him at the moment the blue in his head became the blue on the canvas. Newman’s journey ended in the presence of this painting; mine had just begun.

Daniel Schifrin, writer-in-residence at the CJM, is a co-curator of Beyond Belief: 100 Years of the Spiritual in Modern Art and editor of its exhibition website. Follow the Beyond Belief series here.