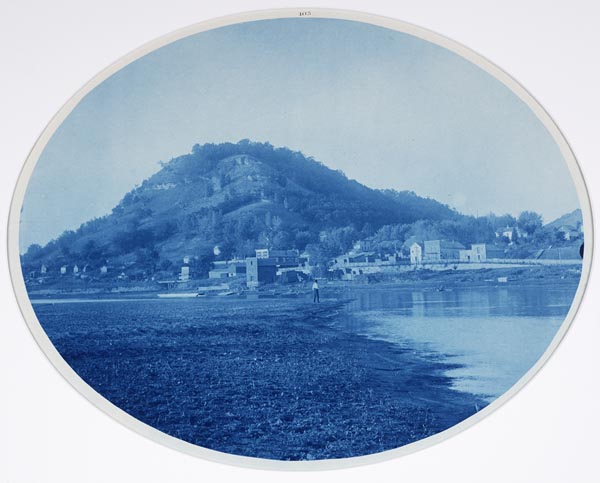 Henry P. Bosse, DeSoto, Wisconsin, from the album Views on the Mississippi, 1891

Just mix cyan with suicide and you’ll get the picture.

I once read about a Bible used by a student in the Sorbonne in the 12th century, each page a skinned cat. Are the words of writers and the pictures of artists ever more beautiful than the life sacrificed to print them?

I keep returning to the cyanotype. Thirteen of them in this collection. A reflected bridge, a fern, an X-ray pelvis both clinical and sultry a century later.

Cyanotypography is a limited technology, only ever giving you that wash of blue. In addition to naming seven moons of Saturn and four of Uranus (the latter after characters in Pope and Shakespeare), fathering twelve children, and inspiring Charles Darwin to find the origin of species, Sir John Herschel, baronet, invented the cyanotype. He showed it to Anna Atkins, who became, and these qualifications seem weirdly specific, the first person ever to make a book illustrated by photographic images. She was a botanist and used cyanotypes to capture the small subtleties of plants. The title of her first book is as limited and weirdly compelling as the medium: Photographs of British Algae. There are a few of her ferns here.

Like cyan, the cyanotype takes its name from the same place as cyanide, an ancient Greek scholar’s word for blue, and uses cyanide in its processes. Cyanide plays a different song than cyanotype. The latter is one of the 19th-century neologisms invented to name the many new technologies gentlemen and lady scholars were churning out, each an advance in sticking image to paper. Cyanide is so named because of its origins as a constituent in the paint Prussian blue. The twist of the tail on cyanide, that chemical suffix, tastes like bitter almonds.

Cyanide takes only minutes to kill a person.

The preferred instant escape carried by revolutionaries and secret agents, hydrogen cyanide took the form of Zyklon B in the hands of the Nazis for mass execution. Californians used it to dispose of their prisoners, and some argue that such an execution is neither cruel nor unusual. Pure liquid cyanide, in the form of pure liquid prussic acid (a historical name), was the favored suicide of the twilighting Third Reich. Erwin Rommel, Eva Braun, Heinrich Himmler, Martin Bormann, Hermann Göring. Adolf Hitler himself bit a cyanide capsule while simultaneously firing his pistol into his right temple, just in case. (Is it poetic justice that these murderers died of the same chemistry as their victims and by their own hands?) Mathematician Alan Turing, after receiving a guilty verdict of being a homosexual, injected cyanide into an apple and ate it rather than go through the hormonal castration mandated by the English court. On November 18, 1978, 907 people died in Jonestown, Guyana, from drinking a mixture that contained cyanide at the behest of their spiritual leader, Jim Jones.

Does the cyanotype hide in its singular color any of the deadly potential of the poison?

Cyan as a color name is even younger than the cyanotype, only in use since 1879. The color of shallow ocean water over white sandy beaches is worn by surgeons because it’s said to be calming.

Cyan is the color of a soothing death. The hue of all those that go gentle into that good night.

For the album Views on the Mississippi, the Prussian émigré and cartographer Henry P. Bosse snapped a man in De Soto, Wisconsin. De Soto’s just a short drive from Jackson County, the subject of Michael Lesy’s Wisconsin Death Trip. For that place in that time, Lesy’s album is a powerful document of Midwestern misery.

But here there is no tragedy, or at least not yet. There is a man on the edge of the great river; a hill rich with vegetation sits on the opposite bank, a small town at its feet. His white shirt catches the eye.

The distant man, faceless, faces the surge of water. I want him to be young. Posing dramatically even. A dandy, a dreamer, a lover, soon to leave the confines of De Soto and take a steamer to Paris, to Hong Kong, to Paramaribo. As he pulls into the harbor, will the water there be cyan? Did he die there in Wisconsin of disease, murder, suicide? Will he jump into those muddy waters and sink, breathless, into the silt?

A picture’s just a hedge against death, always was.

One of the curious qualities of the cyanotype, I’m told, is that when the color fades, it can be put away and the darkness restores the picture almost to its former glory.

Andrew Berardini was born in California and is mostly a writer. His work is mostly fictive and he spends a lot of time on the contemporary art of Los Angeles, where he lives. He is an editor for Artslant and Mousse; a contributor to Artforum and Public Fiction; and the  founder, with Sarah Williams, of the Art Book Review. He recently curated Chris Johanson: Within the River of Time Is My Mind at the Museum of Contemporary Art, Los Angeles. He is currently at work on a book about color.