The Clock: A Marker for the Beginning of a New Day at SFMOMA 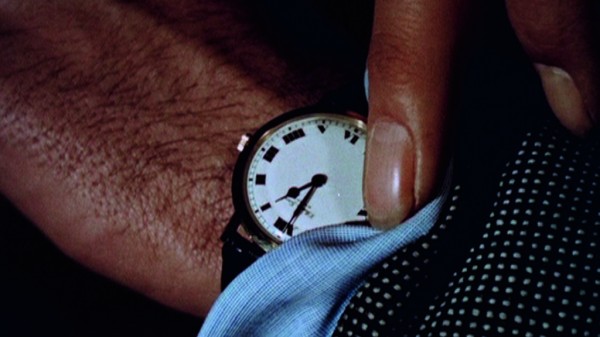 SFMOMA closes twenty days from now and the museum is rolling out four days of festivities to mark the event, including performances, free art viewing, and one of several 24-hour viewings of Christian Marclay’s epic masterpiece The Clock—twenty-four hours of collaged film fragments that reference the time of day or night, synchronized with local time—which is serving as something of a countdown to the museum’s (nearly) three-year on-site hiatus. The museum’s progress to the finishing line finds poignant symmetry with The Clock’s hourly rhythms and crescendos. Before the clock strikes the hour in Marclay’s work, heralding deadlines, appointments, and showdowns, there is a flurry of activity: people rush to and from destinations, phones ring, and tension builds (suspenseful music gaining momentum) before dissipating at the climax. At high noon, when cowboys faceoff in Westerns, the clock seems to gong like a death knell, signaling beginnings and ends, and ushering in a new phase of the day.

In its 1440 minutes The Clock captures the frenetic pace of daily life; there are moments of reprieve—ebbs and flows—but one feels all the more attuned to the work’s motion for the lack of a cohesive plot. The momentum accrues and dissipates but reaches no ultimate conclusion, because in The Clock there is no end (or beginning). It manifests the fantasy of a “neverending movie,” as Marclay noted at the SFMOMA press preview. The cyclical nature of the film’s loop can be experienced as escapism (“When my clock stops ticking, I’ll die,” notes a character from The Twilight Zone) or entrapment (Molloy’s weary refrain, “I can’t go on; I’ll go on,” though not referenced, continually comes to mind), depending on how you look at it—either way, it corresponds to the existential angst that pervades Marclay’s work. 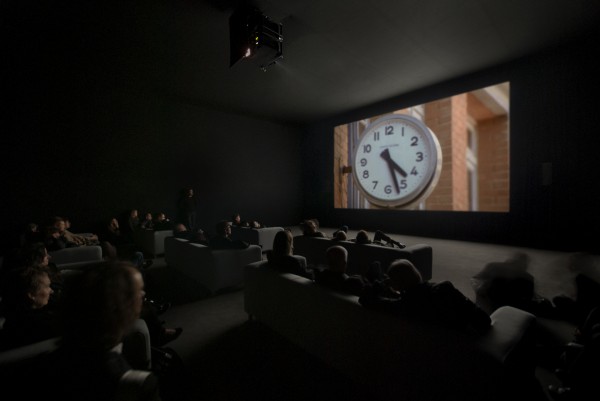 We are slaves to the clock, both bounded by and endlessly reminded of it. Time is envisioned as a sort of preoccupying madness beneath which lurk reminders of death. Among pepperings of well-worn expressions that center on time—“to stand the test of time,” etc. — Colin Firth laments becoming a washed-up old professor, Glenn Close worries about the wrinkles in her skin, and a boy I didn’t recognize blurts out with abandon, “Don’t you know you’re gonna die?!”

But The Clock is far from being a totally morbid send-off for SFMOMA. Amid currents of anxiety, it also projects an extraordinary celebration of human activity, drama, and labor. Threads of narrative are picked up and fused together with seamless editing, and scenes and characters are occasionally returned to, but we linger on them so briefly that plot becomes subordinate to the overall symphony of human action. This sense of effort and drama is mirrored in Marclay’s own Herculean task of researching, organizing, and editing in order to produce The Clock, the specter of which looms large over the experience of watching it. To watch it is to marvel at the marathon three-year process (coincidentally mirroring the museum’s period of closure) undertaken by the artist to bring the work to fruition.

“Time is the essence of music,” Marclay said at the preview, shortly before or after mentioning John Cage and James Joyce’s own twenty-four-hour epic, references that point to the more life-affirming aspects of The Clock. While Marclay’s work lacks, among other elements, Cage’s preoccupation with chance and the depth, complexity, and originality of Ulysses, it captures the musicality of daily life and some of the richness of human experience that those artists absorbed into their work. The Clock represents and honors the artist’s labor (beyond Marclay’s own work, how many more thousands of hours went into the production of each film referenced?) and, with its gesture toward encompassing a complete day, provides an apt conduit for reflecting on a museum’s work in addressing and enriching human experience through the arts.