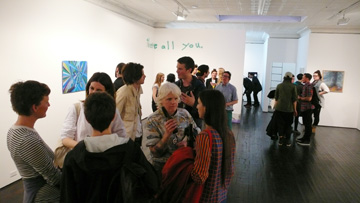 Sometimes in New York this thing happens—you are going out and suddenly you find yourself surrounded by folks you know from San Francisco. After a while you might pause, stare up at the sky, and ask to nobody in particular, “Where are they all coming from?”

Even when you talk to complete strangers—if you talk with them long enough, chances are they know somebody you know from the Bay Area. This town can be an isolating place, so when it happens, it can be strangely reassuring. 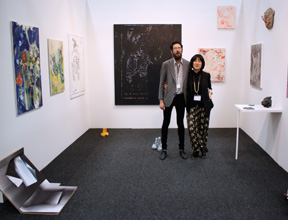 In the booth at NADA with Aaron Harbour and Jackie Im of Et al. Works by Kate Bonner, Chris Hood, Andrew Chapman, and Adrianne Rubenstein

This week, it was at the NADA (New Art Dealers Alliance) fair. I saw Aaron Harbour, Jackie Im, and Facundo Argañaraz, the proprietors of Et al., one of San Francisco’s newest galleries (not to be confused with ET AL., ETC., of Tokyo; et al projects, of Brooklyn; or et al. and the rest (of it), from New Zealand). They showed a selection of sculptures and paintings and reportedly got a visit from the famous New York art critic Jerry Saltz.

Nearby I saw the Queen’s Nails booth with Bob Linder and Julio César Morales. Queen’s Nails always seemed less like a commercial gallery to me than a kind of anything-goes project space where artists could do whatever they want. In that sense, then, it was a good surprise to see them representing at the art fair. The translation of risky art into sellable art is a tough one, but if it can be done, it can be done in New York. 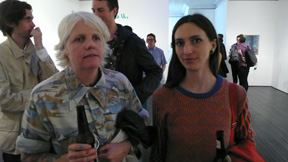 At the same time, just a few short blocks away Alicia McCarthy was having a solo show at Jack Hanley’s new gallery on the Lower East Side, which is where all the cool things are happening now in New York.

Her opening drew an impressive crowd. Tauba Auerbach was there, as were Xylor Jane, Trisha Donnelly, Christopher Garrett, Bill Jenkins, Sahar Khoury, Whitney Shaw, Carolyn Ryder Cooley, and many others that live or have lived in the Bay Area. Many were old friends or at least drinking buddies. In many ways it looked like a family reunion. 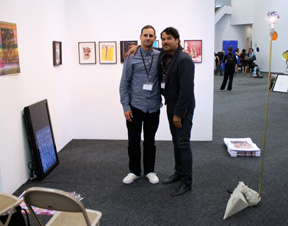 Anyway, Auerbach and Jane are important practitioners of a kind of geometrical abstraction that is very popular today. But back in San Francisco, they were doing it ten years ago. So was Alicia McCarthy. From that perspective it was interesting to see them all together, because they have followed their own personal and artistic paths and yet have remained friends throughout. The fact that those disparate paths all led to New York is amazing and cool because it turns the trope of the “Old Boys’ Club” on its head. 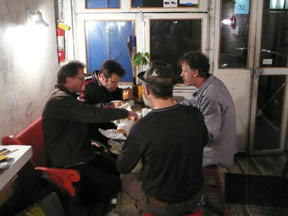 Matt Heckert, Kal Spelletich and Brian Goggin having a post–art opening meal at a Lower East Side night spot

Speaking of the Old Boys’ Club, just about a month ago another Bay Area artist, Kal Spelletich, was in town for a group show called Weird Science that got reviewed in the New York Times. He was here along with Matt Heckert, Brian Goggin, and Achenbach Foundation curator, author, and all around raconteur Robert Flynn Johnson.

Like this past weekend it was also a Bay Area reunion—but from completely different social circles. At Weird Science, many people knew each other from Survival Research Labs, from RE/Search Publications, and from just around the Bay. At that opening I also ran into Marshall Weber, the founder of Booklyn, as well as Bobby Neel Adams, who photographed most of the images for RE/Search Publications’ most famous book, Modern Primitives. 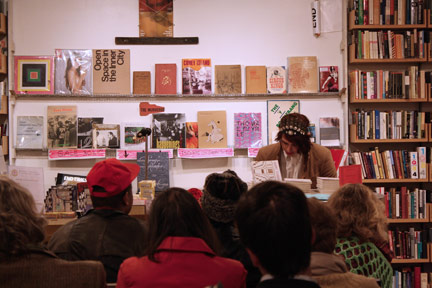 But you hardly need to seek out Bay Area folks because they seem to just pop up unexpectedly. For example, the other night I just happened to see  poet Stephen Boyer, formerly of San Francisco, reading at the one of the best bookstores in New York—Spoonbill and Sugartown.

This bookstore, interestingly, is also a place I go specifically because they carry McSweeney’s books, the Believer, Maximumrocknroll, and a variety of zines and catalogs including those about Xylor Jane, Chris Johanson, Barry McGee, Todd Hido, etc. Also, despite the terrible economy and the vanishing art scene there, it has somehow managed to stay open in the hipster-dominated neighborhood of Williamsburg. It’s definitely the kind of place worth supporting.