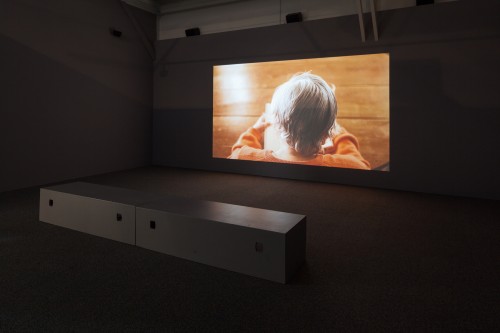 Still from I See Infinite Distance Between Any Point and Another, 2012. Courtesy CCA Wattis Institute for Contemporary Arts; photo: Johnna Arnold Photography

Her murmuring, her mumbling, accented. Her skin, her freckles, her glasses, crisp paper. Her. The her of writing, whomever. The written word is like currency. There remains no attachment between the hand of the writer and the words that were written and certainly not the mouth. Writing, on the other hand, is an act of mark making.

The Otolith Group recorded Etel Adnan reading from Sea and Fog, a book of poetry written in blocks. It is part of the collective’s trilogy on hydropolitics and is included in the current Adnan retrospective at the Wattis Institute. Her physical presence is framed tightly by the camera and is always shot in close detail, never straight on. She sits at a wooden table and mostly reads. Her boy’s haircut, her thick, round glasses, her aged skin construct the film’s dominant textures. In one sequence the camera quietly waits while her thumb pauses in the book. Light from a window brightens a page that hovers there with her indecision. This is thinking, filmed. Time feels antique, material as paper.

In her apartment where I See Infinite Distance Between Any Point and Another was shot, there are old rugs, wooden chairs, canvases leaning against a hallway wall, paints. These surfaces have a resonance thick as Adnan’s French-English, which occasionally renders what she is reading just beyond intelligibility. A copy of Hölderlin, a quill pen, a green patch of paint with a crack, presumably a detail of one of her paintings. In The Acoustic Mirror, Kaja Silverman says, “The notion that cinema is able to deliver ‘real’ sounds is an extension of that powerful Western episteme extending from Plato to Hélène Cixous, which identifies the voice with the here and now which defines speech as the very essence of presence.” Writing is always an absence, a convexity, pointing elsewhere. This video approximates the senses; Adnan’s body becomes a stand-in for what her text transmits. The recorded sound of her voice makes her presence palpable. Meaning reverberates around the text like sound reverberates around and inside our bodies. And yet the sip of water is recorded on the same aural plane as the voice. The act of filming is tangible; we feel the quotidian details of mediation.

If the act of writing bypasses orality, reading aloud resurrects something that exceeds the voice. There is the rhythm of reading that is different from the rhythm of speaking. It contains a has-been, a telling, a reaching into permanence and reenacting it. “When the voice is identified in this way with presence, it is given the imaginary power to place not only sounds but meaning in the here and now. In other words, it is understood as closing the gap between signifier and signified,” says Silverman. Writing always mimes truth telling; the voice confirms its veracity. Writer Vanessa Place calls “the lyric ‘I’ . . . the gold standard of poetry, the presumably inflexible ingot that is believed to be the purest of the pure.”

But at the poetry reading, we are not witnessing law as it is handed down via the mouth of he who speaks; we are being moved in the sequencing rhythm of another law. At a reading, we see this strange, exaggerated thing of a person remaking an act that arose by multidimensional complexities—of rhythm, cognition, appropriation, mimicry, intoning, transfer to written mark—we see this complexity coming back through the body. If, as Barthes says, the text is remade through (silent) reading, it’s the other law of writing that is rebirthed at the reading. We see writing’s phantasmagorical texture. A live, thinking art is set loose from the linear dictates of the page. The voice’s multitude of frequencies, which had been transmitted silently to paper during writing and which echo while the reader is in the book, get resurrected. It’s the text, deprivatized. This is when the body of the writer becomes significant—in the moment when one body comes into the collective body. My subjectivity is all and only the beginning place for my desire to climb beyond my subjectivity into communication, community. From The Acoustic Mirror: “The voice is the site of perhaps the most radical of all subjective divisions—the division between meaning and materiality . . . it is situated in the partition of the organic and organization, in the partition between the biological body and the body of language, or, if one prefers, the social body.”

Etel’s gender (and age perhaps) inflects all this. Friedrich Kittler asserts that the mother’s voice is nature in Romanticism, remembered from the early days of ABC instruction, and now all around the poet, speaking through him. Yet here the female voice speaks for itself, reads its own text. “The image of the infant contained within the sonorous envelope of the mother’s voice is a fantasy of origins . . . which associates the maternal voice with a moment prior to the creation of the world,” says Silverman. But the camera records this body with so little distance—the wrinkle of the neck, hair wisp, a confluence of freckles—that it is an obvious specificity, not standing in for any desire of the viewer the way the filmed female usually is. The body is not on display; it’s one texture among the others—the texture of her voice, her apartment. Now we know her voice and body as we have always somehow known, for instance, Hemingway’s mass, and in the way we know very few bodies of female artists. Filled with itself, presencing. If there is any desire that beckons her presence, it is the desire to bring the artist into her own exhibition.

I See Infinite Distance fills absence with resonance. It is a love letter to mediation, a détournement of the record. There is a doubled, archival care, Etel holding her words about the sea, the camera holding her presence holding them. Our eyes hold all of it. Here the image creates a full circuit between the absent writer and the reader, inside of which the text is live. At the end a frozen sea cracks, painfully, slowly. It is not a metaphor. It is film’s ability to place the recorded real and the remediated on the same plane. It is not an aesthetic image. It redirects Adnan’s reading back into the world.

Painter and writer Etel Adnan has lived between Paris, Beirut, and the Bay Area. Her work is featured in the exhibit Words and Places, showing at the CCA Wattis Institute for Contemporary Arts through June 29. The Otolith Group works in Great Britain and was nominated for the 2010 Turner Prize.