Currents Within a Collection: Sarah Stein

The Elise S. Haas Bequest: Modern Art from Matisse to Marini is on view at SFMOMA till June 2. Open Space is pleased to host a series of posts highlighting Mrs. Haas’s network of personal connections, from SFMOMA Assistant Curator of Painting and Sculpture Caitlin Haskell, and featuring graphics by designer Adam Machacek. 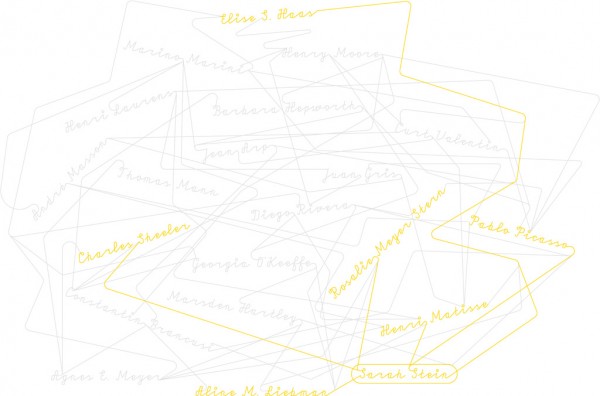 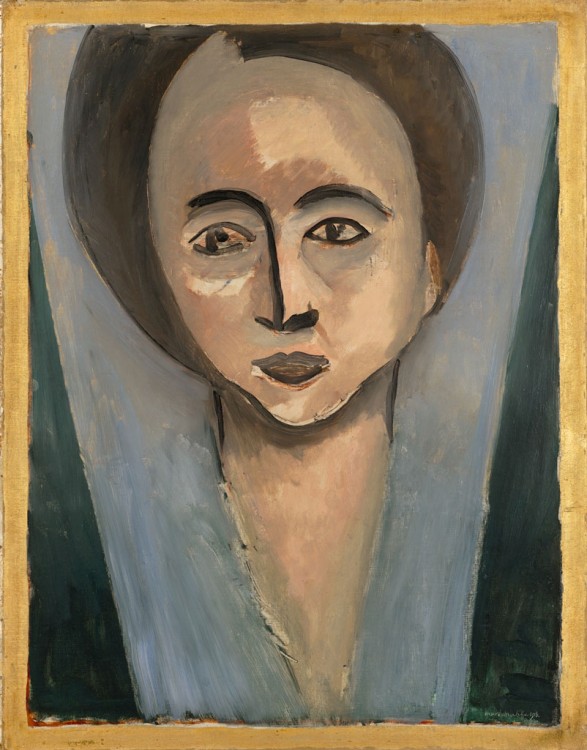 Asked to describe Sarah Stein in 1979, Elise S. Haas presented her as a “very intuitive, perceptive, remarkable woman.” She then turned to Matisse’s renderings of his great patron, friend, and student to do the rest: “She was—well, I think all her personality is revealed in the portrait Matisse did of her. . . . The first sketch he made of her . . . is a perfect likeness. Then he transformed this into the woman she really was. I think it is one of the greatest portraits of this century.”

Of the many great art patrons Elise emulated in the building of her collection, Sarah Stein was among her most formative influences. Their friendship was perhaps unexpected to some. Elise was quick to point out that they were of different generations and that Stein was closer in age to her mother, Rosalie Meyer Stern. But despite their age difference, Elise perceived the importance of Sarah’s collection in its full force, believing in its special contribution both to the history of Modernism and to the history of modern art patronage on the West Coast. She also saw in Stein an uncommonly generous person who, like Elise herself in later years, practiced art in addition to collecting it. 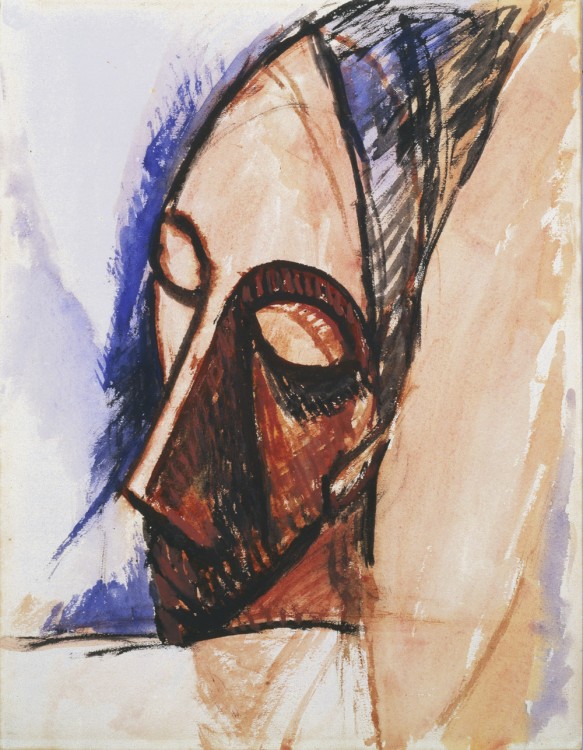 Having sparked a friendship with Sarah in 1938, Elise became the primary architect of a plan to bring the most important artworks from her collection to SFMOMA. Following Stein’s death in 1953, Elise and Chicago businessman and collector Nathan Cummings established the Sarah and Michael Stein Memorial Collection. Together, she and Cummings respectively brought Matisse’s portraits of Sarah and Michael Stein to SFMOMA, preserving the only instance of double portraiture in the artist’s career. A few years later, Walter and Elise Haas presented our museum with Matisse’s study for the portrait of Sarah Stein in graphite on paper.

Through her relationship with Sarah Stein, Mrs. Haas brought to SFMOMA some of the finest Matisse paintings from the artist’s crucial years between 1905 and 1907. The first work she acquired from Stein was a fauve landscape, the Study for Le Bonheur de vivre (“The Joy of Life”), a work that ties into Haas’s appreciation of lyricism and epitomizes Matisse’s ability to use color to ignite an emotive response from viewers. Later, in January 1948, she acquired the jewel of the collection, Femme au chapeau (1905). Elise brought the painting to her home on a week-long “test drive” to make sure she was confident in the purchase, and it remained in her collection for over fifty years. 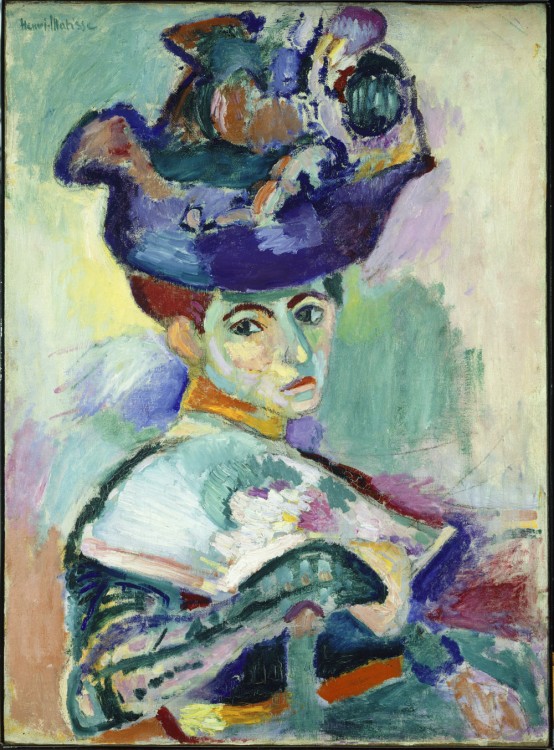 One of the most iconic portraits of the twentieth century, Femme au chapeau was purchased by Leo Stein, Sarah’s brother-in-law, after its debut in Paris in the fall of 1905. Leo described this picture as a work that “made everyone laugh except a few who got mad about it.” And he admitted that even an experienced collector like himself “needed a few days to get over the unpleasantness of the putting on of the paint.” Responses to the chaotic brushwork and riotous palette eventually mellowed, of course. To Mrs. Haas, the painting’s cacophonous color was refreshing. “It’s like a cocktail,” she said. “When I’m tired, I sit and look at it, and it revives me. It has such vitality to it.” During a visit with Matisse in the south of France toward the end of the artist’s life, Mrs. Haas’s exchanges with the artist led her to believe he still considered it among his greatest works.

Sarah Stein’s presence is felt throughout the Haas collection, and not only in its most spectacular works. Attentive viewers will see that Femme s’inclinant (1906–7), a graceful ink-on-paper drawing, bears not only Matisse’s signature (in the lower right) but also an inscription in Stein’s hand: “To Elise from Sarah with love.” The note was added when Mrs. Haas took possession of the drawing in the 1940s. As Stein does here, Matisse often inscribed works on paper to their recipients. The gesture appears two other times in this exhibition. In the Study for Portrait of Sarah Stein (1916), the dedication in the lower right reads “a Mad[am]e Michel Stein/homage respectueux/Henri Matisse 1916.” And in Fairy in a Luminous Hat, Souvenir of Mallarmé (1933), an inscription in Matisse’s hand, “à Sarah & Michel Stein/affectueusement,” is written at the lower left. 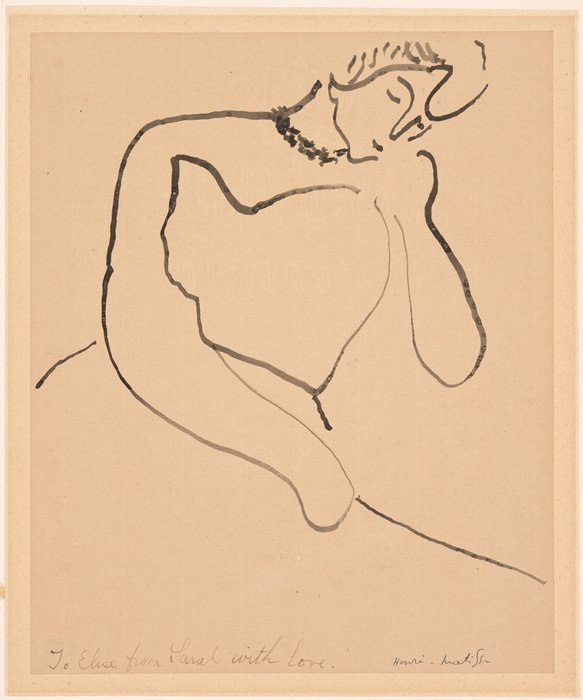 I began this series of posts as an attempt to place the works from the Haas bequest within a wider set of reference points in hopes of generating new thoughts about them, and as a way of saying thank you to Mrs. Haas for giving us so much to celebrate. Over the course of working with the Haas bequest, its holdings took on new identities—they remained great objects but also became markers of hard-won negotiations and heartfelt relationships. The bequest, in that sense, is not only a gift of art but also a record of human exchange preserved in objects. Elise has been the primary figure, connecting the individuals in each of the four posts over the past two weeks. But she was rarely the purveyor of a solitary viewpoint. Elise Haas collected. And the result of that effort was a body of work that spoke for a larger community, one that spanned generations and continents. Thanks to her, their works have become our works.

Follow the Currents Within a Collection: An Alternative History of the Elise S. Haas Bequest series here.