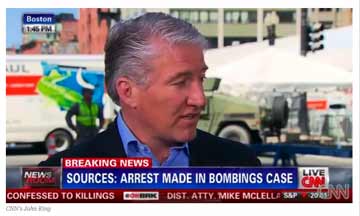 Has social media made us all stupid? During the Boston manhunt for the marathon bombers, the #tweeters, the Facebookers, and Reddit users spread all kinds of erroneous rumors, provided tons of false leads, and misidentified several individuals as the bombers. If that wasn’t bad enough, several mainstream media outlets ran with stories that weren’t true.

First, during the Boston manhunt, CNN’s John King breathlessly reported the bomber was a dark-skinned male who had just been arrested. Of course, that went viral immediately. Unfortunately he was wrong — no arrests had been made at all, and the suspect was not dark-skinned. 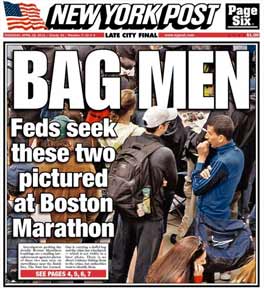 Next up, the New York Post didn’t merely identify the wrong men as the bombers, it put them on the cover! The “BAG MEN” became instantly famous. But again, neither of them was the bomber. In fact one of the guys, Salah Barhoun, was actually a high school student who wasn’t even from Boston.

So whatever happened to fact-checking, getting multiple sources to confirm information — oh, and journalistic ethics? Don’t those things matter anymore?

Apparently not when it comes to scooping the competition. Shortly after the Post cover, the New York Daily News ran a cover showing a street awash with blood, but it Photoshopped out the gash on the woman’s leg where the blood was coming from. Supposedly it was OK to show the person’s agony, the violence, the horror, but not the wound? Talkingpointsmemo.com reported that, when “reached for comment this morning, a News spokesperson would only say: ‘The Daily News does not comment on its editorial decision-making.’ ” How’s that for integrity?

These are major news outlets, and they should know better than to alter news photographs.

According to the LA Times, “forums like Reddit and 4chan were alive with speculation — based on little or no evidence — that the culprits were Muslim fundamentalists or perhaps right-wing extremists.” But who needs proof when you are on Facebook or Twitter? There’s no law against gossip and rumor.

And there was also the case of a Brown University student, Sunil Tripathi, who was the focus of speculation after Reddit users misidentified him as the potential bomber in the white baseball cap. 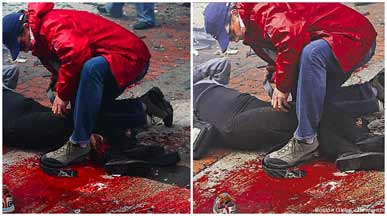 Worst of all, there were so many conflicting leaks by so many overlapping law enforcement agencies, it should have been obvious that bad information was getting out. For example, for about 24 hours police had been claiming the actual alleged bombers had robbed a 7-Eleven store. They had pictures. Well, it turns out they didn’t rob the store. Did anybody think to follow up to see if there was an actual robbery or who it was that committed it?

It’s no secret that the police will deliberately mislead the media if they feel it helps their cause. They do it as a matter of policy. If anyone paid attention to all of the intentional falsehoods spread about Occupy Wall Street activists, it’s clear enough it’s no accident that willful mistruths are fed to the media.

While it’s right to vigorously report on major events like the search for mad bombers, terrorists, murderers, and the like, it’s also crucial that news media reports are accurate. Is that too much to ask?