Calder Yates wrote this review of Stairwells’s Field Trip #3, conducted by Sarah Hotchkiss and Carey Lin, in response to an assignment in my dual-degree seminar at California College of the Arts. I invited Calder to share his perspective with the readers of Open Space.

Compulsive activity comes in many forms: counting specific things (such as footsteps) or [counting things] in specific ways (by intervals of two). Doing other repetitive actions, often with atypical sensitivity to numbers or patterns. A parent once told me that compulsions are most common among children. They eventually grow out of it, she said.

Not so with Field Trip #3, an art event/tour/happening conducted by Sarah Hotchkiss and Carey Lin. The two founded Stairwells, their curatorial project that puts transitional spaces to use for exhibitions and performances. Field Trip #3, as the name suggests, denied the participants the adult-ness and cynicism normally associated with contemporary art. 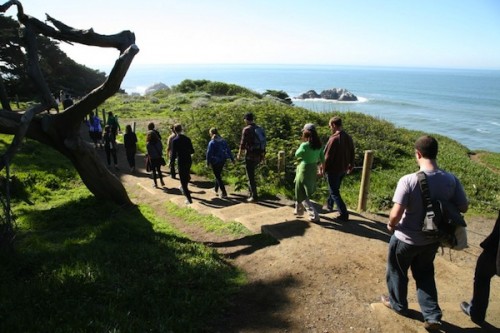 For those who were able to RSVP for the field trip (the event reached capacity within hours of its announcement), we received an email genially, but mysteriously, asking us to arrive at the Lands End monument at 10 a.m., Sunday, February 10. The email had no other information. Upon arriving, we received an outdoor demonstration of San Francisco building codes for stairs, and a how-to for measuring step dimensions and tread quality. The short presentation illustrated urban designers’ and city planners’ compulsive awareness that goes into creating stairs, which allows the rest of us to mindlessly pass over them.

After the dry, good-natured demonstration, Sarah passed out hand-held tally counters — the clickers that allow easy, unthinking counting. “Guess the number of steps we will be taking on our tour of the Sutro Baths,” she said. We did. She recorded our answers. And off we went on an ambulatory adventure.

After the tour, over Capri Suns and oatmeal cookies, Sarah averaged the numbers on our clickers, determined whose guess came closest, and awarded the two winners one prize each. Hotchkiss and Lin resurrect a field trip’s sense of anticipation and liberation from the graves of our adult concerns. Counting steps and measuring distances, we deliberately stepped, Francis Alÿs-like, into the mundane.

In taking advantage of transitional and unconsidered spaces, Stairwells positions itself within a conversation on the politics of public space, mirroring much of Alÿs’s work. Alÿs will push a block of ice through Mexico City streets, or walk those same streets gripping a firearm in full view of the public, get arrested by the police, and reenact the same walk the very next day with the police’s help. Whereas Alÿs’s work contains a powerful social action component, Stairwells is much more playful in its projects. At times, I wonder if their playfulness in their Field Trips does them a disservice, too easily allowing participants to walk away thinking only, “That was fun.”

But as I found myself walking away from the Sutro Baths, I was considering the act of walking away, counting my steps, recognizing how high I lift my leg to climb stairs. Who knew that counting your steps could be a lightening experience rather than a compulsive drive?

Calder Yates (b. 1985) lives and works in San Francisco. He received his BA from New College of Florida (Sarasota) in art and political science and is currently pursuing a dual degree — MFA in studio art and MA in visual and critical studies — at California College of the Arts in San Francisco. He has worked for the NYC Office of Emergency Management; taught art therapy programming in hospital oncology units; and collaborated and danced with Club Lyfestile, a neon unitard–wearing dance group based in Philadelphia. He served a residency at Recology in 2012.