Time Travel in the Arts 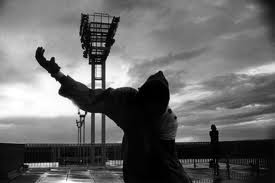 Ever since seeing Chris Marker’s La Jetee decades ago, I’ve loved movies about time travel. My addiction to Turner Classic Movies delivers a subtle kind of time travel movie every night. Take for example Van Dyke’s San Francisco, made in 1936 about an event in 1906. Seen from my position in 2012, the nuances of time echoes are enough to get my head spinning. The earthquake was for them a relatively recent phenomenon–thirty years previous. However, those thirty years were tumultuous–World War One, Prohibition, the Depression. Victorian San Francisco of 1906 must’ve seen very quaint to these hardened people. We are seventy-six years displaced from that Clark Gable film, more than double the time between the film and the earthquake. We could never know some of the ’06 details that they recalled in 1936–like the climactic scene when the quake strikes in the middle of a citywide talent show cum auction competition called a Chicken Ball, a social event unknown to us now. Thirty years ago for us was the surfacing of AIDS, for example; could a filmmaker in 2040 get those period details right, let alone in 2080? 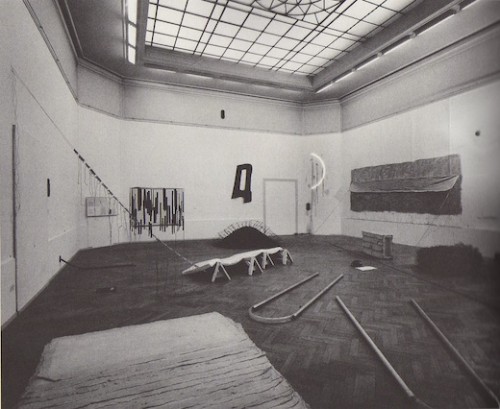 Installation of When Attitude Becomes Form 1969

The current show at the Wattis Institute is a recapitulation of the seminal Harald Szeeman show When Attitude Becomes Form which took place in Switzerland in 1969. Curator Jens Hoffman has asked dozens of international artists to make work in response to the original exhibition. The simultaneous telescoping and collapse of our lived experience of time is one of the essences of contemporary life, and conceptual practice as well, and this project flips me around in exactly that way. That is, the organization that I was first associated with, 80 Langton Street/New Langton Arts, was in large part founded in 1975 (37 years ago)  in the wave that Szeeman began six years earlier and half a world away.

Hoffman synthesizes in his wall text seven themes of this kind of art making: 1. use of research; 2. interest in process as much as product; 3. attention to the minutia of objects and gestures; 4. attention to the complexity of the world; 5. interest in time; 6. interest in art history; and 7. interest in cultural and political shifts. I would add to that list the following: 8. interest in language; 9. work that documents art actions, especially ones that critically engage commerce; 9. use of found objects; 10. assigning oneself tasks, often repetitive, laborious and absurd; 11. use of jokes; 12. use of electronic and digital media; 13. interventions in architecture and everyday life; 14. international point of view; 15. use of opaque content; 16. interest in science and measurement; 17. use of correspondence; 18. defeating or engaging sensory information other than the visual; 19. playing with communication systems; 20. taking oblique stances on politics; 21. making drawings without the use of the hand; 22. do-it-yourself strategies; 23. use of real risk and danger; 24. embrace of theatricality.

Jane Farver, who curated the exhibition Global Conceptualism: Politics of Origin 1950s to 1980s, in 1999, made the argument that conceptual practice was neither a Western European nor a New York invention, but rather that the “moments of rupture” from object-based to idea-based art were neither sudden nor geographically confined and happened on every continent starting some fifteen years before Szeeman’s show. When I entered the art world in the mid-seventies such practices were already common among many local artists, many of whom who had been my teachers, and their first major public expression was at SF MOMA in 1981, when curator Suzanne Foley organized the landmark exhibition Space Time Sound, conceptual work by 21 Bay Area artists and teams. Eight years later Nayland Blake curated a show titled Bay Area Conceptualism: Two Generations [!] for Hallwalls, an alternative space in Buffalo, NY.  This show took place twenty years after Szeeman’s show, and twenty-three years ago.

Here’s what Blake had to say, in part: “This exhibition was conceived as a way of commemorating two moments, the first in the beginning of the 1970s, and the second beginning in 1985. While most of the artists in this exhibition have produced bodies of work that span the last two decades, there have been certain points at which their work has reached critical mass–when their varied practices have come together to enter into discourse and to have an impact beyond their immediate environment….They participate in the reformulation and expansion of the parameters of the legacy of conceptual art practice…the dissemination, in the late 1970s, of a variety of theories engaging issues of textuality, sexual politics and psychology.” I wrote in that same catalog: “The earliest works of Paul Kos, Tom Marioni and Terry Fox in the late sixties was contemporaneous with the explosion of work being done in Europe and New York….What was being discussed on the East Coast and in Europe then had substantial impact here, but was also ameliorated by distance and inclination…and by Bay Area influences as diverse as the radicalism associated with resistance to the Vietnam War, The Beat era and its subsequent Hippie and drug cultures, Bay Area Funk school attitudes, Fluxus West, and Asian influences, among others.”

Conceptual practice was established enough at this time for there to be notions of generational change, and specific language embedded in how we thought about work. And it is amazing how these texts and exhibitions and influences leapfrog around through recent art history. In conclusion, I’ll mention a few examples of the language used in documentation of 80 Langton’s first year, published in 1976 as a collection of postcards. The cover image of the space says on the back: “Events and exhibits focus on time- and non-object-oriented art forms such as performance, video, music, dance and film, as well as other experimental and multidisciplinary situations. [italics mine].” Linda Montano says of her performance (with Nina Wise): “[we] played drums for six hours a day for six days in order to change, transform our minds….” Ina Evans said, “I am exploring the ability of a photograph to isolate an image and transform it into a ritual object.” Martin Myers said of his painted sculptures, “To diminish the importance of the image, I have chosen images that are visual cliches without inherent meaning or value….” John Gillen wrote, “My film image writes incomplete letters on the wall. My real image completes the letters. At the conclusion of the performance, a ‘hieroglyphic’ text remains on the wall.”