This is the last of a three-part conversation between Vietnam-based curator and Sàn Art Director Zoe Butt and art historian and writer Moira Roth. See below for links to previous posts. 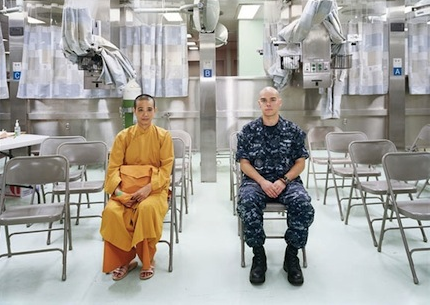 Moira Roth, email; Thursday, September 27, 2012; Berkeley, California
And now let us return to an exchange about your exhibition in San Francisco!

Can you tell me more about the five Poetic Politic artists you selected who speak (as you wrote in an earlier email) “directly to the theater of ‘war’ “: PHAN Quang, UuDam Tran NGUYEN, An-My Lê, VÕ An Khánh, and VANDY Rattana.

Like an agitated butterfly, I have been flitting around the Web, looking for material about them.

For VÕ An Khánh (born in 1938, Vietnam), I found a pdf of your 2010 essay about him, and online images of the two photographs (Mobile Military Medical Clinic, 1970, and Extra-curriculum Political Science Class, 1972) that you described in your text. I studied the highly informative website of VANDY Rattana (born in 1980, Cambodia) and looked at a review describing his 2009 Bomb Ponds series. I also read about Stiev Selepak (Art Rebels) and Sa Sa Art Projects, the artist-run initiatives he had co-founded in 2007 and 2010 respectively, in Phnom Penh. For An-My Lê (born in 1960, Vietnam), I found a press release on her Small Wars, an exhibition held at San Francisco’s Museum of Modern Art in 2007.

Perhaps we could begin with these three artists: VÕ An Khánh, who is still living in Vietnam; VANDY Rattana, who is now living in Taipei; and An-My Lê, who left Vietnam as a teenager with her family in 1975, and since then has lived in New York.

Zoe Butt, email; Wednesday, October 3; Ho Chi Minh City, Vietnam
Ah, it is so good to be back in the land of monsoons, humidity, and the ordered chaos of Saigon after my hectic global meanderings. I wish for the time with Pacific Ocean stamps on envelopes and the hand-written means of sharing information. I completely sympathize with your feelings of being an “agitated butterfly” in reference to wanting more information about this part of the world. Indeed, the great lack of text is what prompted me to move to Asia!

The surreality of space over email, the near fictive quality of reality, is incredibly alluring and, indeed, is of great motivation for me in my often obstacle-laden work.

The role of our imaginations today has never before had such room to maneuver, and it is this sense of imagined capacity, the idea of preparedness through rehearsal and forecast, that is of particular influence inside the Poetic Politic exhibition.

AN-MY LÊ, 1960-
An-My Lê’s Event Ashore series uniquely captures particular moments of the United States armed forces in their humanitarian missions in locales ranging from Indonesia to Vietnam, and from Ghana to the Suez Canal. Gaining special permission to accompany such U.S. military combat rehearsals there between 2006 and 2010, Lê’s camera lens freezes the theatre of war by drawing our eyes to the hidden presence of Buddhism and tribal practice (to name but a few examples) in these “training grounds” between the U.S. and its allies, where soldiers work beside monks and hospitals stand out as war ships in seas locally contested (South China Sea).

VÕ AN KHÁNH, 1936-
In contrast to this preparedness of war is the black-and-white photography of Võ An Khánh, who, during the Vietnam War, joined the revolutionary forces of the Northern Vietnamese army. Traveling with the guerrilla unit documenting the frontline of the resistance against the U.S., his camera defied swamp conditions in his incredible capturing of resilience by surgeons operating on makeshift tables knee-deep in water; or the female insurgents gathering to collect intelligence wearing head masks to protect each other’s identity.

The light qualities and spatial compositions of both An-My Lê and Võ An Khánh remit a kind of theatrical narrative — however, one remains entirely rehearsed while the other is quite traumatically lived.

VANDY RATTANA, 1980-
The sliding of time between 2006–2010 (An-My Lê) and 1970 (Võ An Khánh) is given further comparison in the work of Cambodian artist Vandy Rattana, whose photographs equally comment on similar contexts and historical praxis.

In 2010 Rattana traveled to 10 provinces most severely scarred by the over 200,000 tons of bombs dropped by the U.S. across Cambodia between 1964–75. His Bomb Ponds series of photographs and documentary film capture his conversation with local villagers about this traumatic history — for in the work of Vandy Rattana, the silence of history in Cambodia can be seen, heard, and felt.

I have just studied with great attention and admiration your description of these five artists, who speak (to use your own words) “directly to the theatre of ‘war’, be it in process, in aftermath or in our rehearsed imaginations that marry military surreality with humanitarian mission.” Could you now please describe some of the themes and concerns of the other five artists in the exhibition: Phunam, Dinh Q LÊ, KVAY Samnang, NGÔ Đình Trúc and TRẦN Minh Đức.

These artists all satirically and poetically comment on their re-interpretation of historical facts, everyday phenomena and cultural anomalies.

PHUNAM 1974-:
In Phunam’s ‘Patination’ photographic series we see an abstract swathe of peeling beige paint (the typical color of Vietnamese Communist government buildings) eroded by the choking color of soot, fuel and grime created by the thousands of motorbikes and scooters that transport the Saigon’s population (and indeed the whole country) each day. This is a study of the southwest wall of the Department of Culture, Sport and Tourism in Ho Chi Minh City, which houses the Communist Party’s key personnel who monitor and restrict public activity in Vietnam. The title of ‘Patination’ is a deliberate pun with obvious referral to the texture of a surface, but also questioning the substance of a nation.

DINH Q. LÊ, 1968-:
While Phunam creates an abstract linguistic metaphor, the work of Dinh Q. Lê draws on two historical occurrences of similar structure. In Lê’s video animation ‘South China Sea Pishkin’, numerous helicopters crash into the sea. ‘Pishkin’ refers to the American Indian Blackfeet term used to describe the killing of roaming bison as they are forced in their panic towards a cliff and, ultimately, their death in the sea below. This act for Lê recalled the thousands of Southern Vietnamese helicopters which fell to their end in the South China Sea on April 30, 1975 as they fled the encroaching Northern Vietnamese Army, which was marching towards Saigon.

KVAY SAMNANG, 1982-:
The re-staging of a historical moment and the reflection on strategy, outcome and ensuing remorse for the loss of human life and ambition is also visible in the photography of Kvay Samnang. In his ‘Untitled’ images we see the artist standing chest-deep in one of Phnom Penh’s central lakes. Sympathizing with the local community — who continue to live on or close by the increasing polluted conditions of these waterways that were once inner city sanctuaries — Kvay’s images are testament of the social cost of industrial modernization. In 2007, Boeung Kak Lake was leased to a local developer who has since filled the entire expanse with sand, forcibly removing thousands from their homes, many of them imprisoned for refusing to relocate. In Khvay’s performances, he observes and mimics the survival techniques of living on water in silent protest of the space his people must unjustly be forced to call “home.”

NGÔ ĐÌNH TRÚC 1973-:
In Vietnam, as in many other “rising tigers” of Asia, the urban landscape is chaotic with images and text-messages expounding consumer luxury items, fast food and government propaganda. Images of past icons become stereotypes, bi-lines and soundbites twice removed from their contexts as can be seen in the work of Ngô Đình Trúc where Ho Chi Minh stands labeled as a “Communist Stylist.” Dressed in his typical Vietnamese dress-coat and scarf, Ngô infers Communist ideology as just another corrupt social bureaucracy akin to the fickle trends of the global world of fashion (a social trend of great popularity for the nouveau riche of Vietnam). Tourism is also one of Vietnam’s key economic strategies and, in 2012, the country’s coast remains dotted with the concrete remains of developers’ dreams in pause. There is just not enough consumer confidence to sustain the high levels of infrastructure desired.

TRẦN MINH ĐÚC 1982-:
Trần Minh Đức began collecting postcards upon completing his studies in Ho Chi Minh City. These images of Vietnam’s natural wonders, traditional life-style and official government buildings were proud sites for an artist who longed to travel. He soon became aware, however, that these postcards were not of today’s Vietnam, but rather of a decade or more ago.

Recalling his country’s history of occupation and invasion he reflects on his nation’s vision of the future by placing a pink crystal growth on postcards that seem to lament Vietnam’s past — like an alien intruder creating its own kind of “civilization.” His use of pink refers to the Pomacea Canaliculata (Apple Snail) eggs that were officially imported in the 1980s into Vietnam believing them desirable by the domestic consumer market. These snails were later listed as one of the most dangerous invasive species in Vietnam. Pink also recalls “Agent Pink”, a little known powerful herbicide and defoliant used by the US military in its chemical warfare program during the Vietnam War.

Moira Roth, email, Wednesday, October 10, 2012, Berkeley, California
As you know in the last few days we have finished editing this exchange – with emails flying back and forth during the night between Berkeley and Ho Chi Minh City. And now all we have to do is to wait (you in Vietnam and I in California) for the “Poetic Politic” opening at the Kadish Art Foundation, which will be exactly a week from now.

As I reflect on our exchange, I keep returning, with profound admiration, to your commitment to curating.

Today I reread an online August 2012 interview with you by Anh Do where you explain that you decided three years ago to move to Vietnam in order “to push my own curatorial practice and research and see if I can truly help in the way that I think I can help in getting artists to test themselves, think harder.”

You also explain to Anh Do that the word curator is derived from the Latin word curare (meaning to care for) and tell him that “For me, a curator is someone who cares about the work of artists and about why they have chosen to do what they do.”

Clearly, Zoe, that is what makes you such a remarkable curator, and clearly that is why your “Poetic Politic” exhibition is so remarkable in its choice of artists, who themselves care deeply about the subjects and ideas they address in their work.