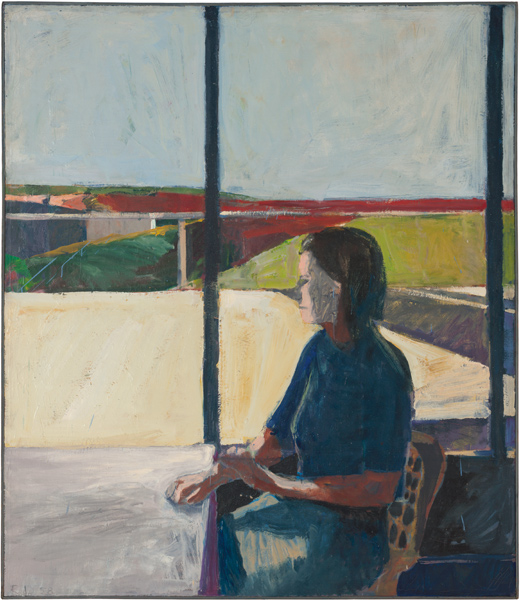 Certain models of mind say that consciousness and environment are inseparable. As a figure (a representation of consciousness) contiguous with an abstracted ground (environment), Richard Diebenkorn’s Woman in Profile (1958) enacts and prophesies this theory of indivisibility. Her left hand is becoming a paw while her right seems to melt into the creamy table. The outer seam of her torso literalizes the concept of a blurred border, in this case between a painted skein of light and a lighted skein of paint. The visible (paint) and the invisible (mind) are here sited, or sighted, adjoined in flow by light. Yet the masklike face of the Woman in Profile has a stolid affect (albeit more like wax than stone).

The closer you are, the rougher the paint. It looks pushed, as if it has been brushed aside, so to speak, to make way for the abstract painter’s turn, or return, to the figure. But it refuses, insisting on its primacy as material, erratically fleshing, dripping and sliding, especially around the figure’s dilute head, half skull, half mask, and her anamorphic eye upon which the green grass intimated outside encroaches, below a red horizon, projecting out: at what is she so keenly staring? She occupies multiple prepositional positions. If she is attending to the landscape, she’s a Diebenkorn regarding a Diebenkorn. But in fact her look seems directed at a secret beyond the limits of the frame.

Even as the painting as a whole emblematizes the sunlight that unifies and interpenetrates forms, the woman’s tense, patient facial expression appears closed off, hermetic, totemic, and ancient, as if to say consciousness is separable from environment, insofar as face precedes world, insofar, that is, as the world is disclosed, if not initiated, by consciousness. But what is the world here? As in so many Diebenkorns, it is agricultural rather than horticultural, an industrialized but still luminous California.

One of many etymologies of the word paint is the Greek poikilos: variegated. Beyond the layered, folding planes of land at the vanishing point clear of Woman in Profile the firmament variegates; it roils and masses. Diebenkorn’s unsmooth sky simultaneously describes air and paint along a rippling continuum of matter, subatomic and mineral. Body, paint, and land are contiguous, literally of a piece.

Another root of paint is from the Lithuanian, piesiu: to write. Writing and painting have the same problem, the “mystery of reality’s otherness” as Giacometti put it. Ekphrasis, the written description of visual art, is from the Greek verb ekphrazein, meaning to proclaim or call an inanimate object by name. Accordingly, inanimate writing calls inanimate painting: it proclaims it by name; they are inter-animating. The process of naming brings both of these inanimate phenomena to life. When perception permeates our experience, is immanent and necessary to it, and even determines the relative location of objects, what is not animate? When we achieve our human purposes by means of prosthetics, amplifiers, and intensifiers such as tools and toys; masks and games; texts and images; performance and personae?

The Latin word for mask is persona (from where we get “person”). The masks worn by performers in the theater of antiquity were called personae. They were at once costumes, part of a play’s visual vocabulary, and a form of technology for amplifying the volume of the performer’s voices (early special effects). But the masklike face of the Woman in Profile seems to intensify in the opposite direction of the persona. Her mask, her fixed stare, amplifies silence, speaks of the unspoken, or unspeakable. What moves on the other side of her fixed context? Who’s there? It could be us; it could be language. Whatever it is, it’s in the distance, going in the other direction.

The figure and the title, too, seem to be heading in different directions. The woman in profile in the painting called Woman in Profile seems ambivalent. I imagine her thought bubble: “Gendered, profiled, here I hang, tense, incandescent yet generic!” The figure is painted as inseparable from, one with, nature, light, and place, while the title produces distance and has the ring of an irony, as if to critique the sentimental, overwrought history of captions appended to representations of woman-as-nature. (Such as the 19th-century sculpture Nature Unveiling Herself before Science, in which nature, metaphorized as woman, seems to slowly bare her breasts, suggesting that there is great frisson to be found in the pursuit of facts.) Though the Woman in Profile is no nature metaphor, she is simultaneously a feature of domestic interiority and mapped onto the landscape, tagged and positioned in both terrains. The objectivity of the caption Woman in Profile and the subjectivity of its object do not converge; they grow farther apart.

Miranda Mellis is the author of The Spokes (Solid Objects, 2012); None of This Is Real (Sidebrow Press, 2012); Materialisms (Portable Press at Yo-Yo Labs, 2009); and The Revisionist (Calamari Press, 2007). She is a coeditor at the Encyclopedia Project and grew up in San Francisco. For more, please visit mirandamellis.com.

Our One on One series features artists, writers, curators, and others, responding to works in SFMOMA’s collection. You can follow it here.

Tags: Miranda Mellis, mmellis, One on One, Richard Diebenkorn