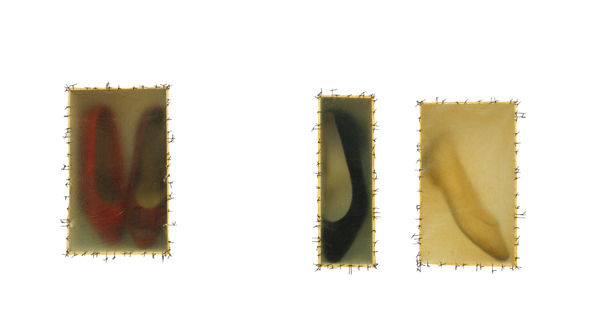 A pair of your daughter’s shoes sits on your desk: diminutive yellow Mary Janes with a leather ruffle T-strap. Of course, she didn’t choose them — she was an infant when you bought them, accessorizing vicariously through her. Once they were outgrown, you kept them like a souvenir from your life and a distillation of that moment in hers — tiny baby feet, first steps, and your immense love for her. Set loose from time, the past and the present and whatever hopes you have for her future shuffle together like cards in your mind at the sight of these shoes. On days like today when you are without your child, you eye these shoes and feel her absence pointedly. The faint scuffs bear evidence of life: yours and hers, intertwined.

The shoes in Doris Salcedo’s Atrabiliarios (1992–2003) invoke an immediate emotional response about the lives of strangers, as real as if it were your own. A series of lone shoes and shoes in pairs are housed in irregular enclosures cut into the walls of the museum. When you first see the work, it dominates a quiet room. Later, it occupies your memory with the same clarity. The openings are covered with thin sheets of dried animal membrane, crudely stitched to the wall. It is only barely evident through these semi-translucent windows that the shoes have been worn. Empty boxes, made from the same organic material, are stacked on the floor.

You first see it as a meditation on presence and absence. You garner so much — or think that you do — from small signals: red shoes are imbued with whimsy, low heels are practical, ankle straps are demure, and so on. Your imagination fills these shoes, and you feel their emptiness poignantly, with an overpowering sense of empathy. You understand the magnitude of emotion held in the sight of a child’s shoes, and this is how you first perceive Atrabiliarios.

You later learn that the artist collected these shoes from families of women who have “disappeared” during the bloody civil war ongoing since 1964 in the artist’s native Colombia. The fate of these women is unknown, though hope endures among families of the missing. Thousands have been taken hostage each year, many held in the jungle by various armed guerilla groups, including Fuerzas Armadas Revolucionarias de Colombia (FARC). Atrabiliarios, meaning “defiant,” is essentially an accumulation of evidence against this violence. You try to reconcile how such a dangerous threat in one place can be addressed so openly in another. Considering this, you conclude that art is a sanctuary to make visible the invisible.

Long after you’ve seen the work, you grapple with the discovery that kidnapping is so commonplace in Colombia that radio stations provide daily airtime for families to send messages to hostages. The mother of Ingrid Betancourt, a former politician held captive for six years, sent messages every day for years without knowing if her daughter ever heard them. The thought of someone waiting in line for hours to send one-way messages breaks your heart. You imagine that radio silence fills the room of Salcedo’s spare installation.

Can words capture the vast emotional depths of loss? Can objects? You aren’t sure. Your mind shuffles through your own memories, looking for a point of entry. You recall the room at Auschwitz filled floor to ceiling with thousands and thousands of shoes, from the tiniest baby shoes like your daughter’s to shoes like your own, 110,000 in total. Seeing it you felt stunned and numb — and admit it, powerless when confronted with the magnitude of lives lost. At this memory of powerlessness, you also recall the quiet secretary in your father’s office that summer you worked for him to repay a debt. The two of you hardly spoke, but still you were shell-shocked months later when she was randomly kidnapped and brutally murdered by strangers. At the time, you didn’t know how to respond. All these years later in an art museum, you get it for the first time: accumulation and preservation is one way to resist forces beyond your control. However you can do it is one more way it needs to be done.

As a small act of defiance, you make your own boxes from words. It’s what you know to do. You place the memory of every barefoot daughter, from here to there, inside these boxes and stack them in your mind. Your daughter’s yellow shoes sit on your desk and fuel your writing. Your numbness thaws and is replaced with a slow boiling rage over what you’ve learned and what you’ve seen and what you remember. You pour it into the writing, and you feel every word. Even if it is impossible to know how it might be received, it feels a hell of a lot better than powerlessness. You’ve learned this much from a forceful, wild-haired artist: remembering, in art and in life, is a form of agency in a world where mothers whisper encouragement into the ether and wait through each dawn for the chance to do so again.

Christian L. Frock is an independent curator and writer. Invisible Venue, the curatorial enterprise she founded and has directed since 2005, collaborates with artists to present art in the public realm. Her writing is regularly featured in KQED Visual Arts, SFArts.org, art ltd., and Art Practical. Her writing and projects are archived on http://www.visiblealternative.com.

Tags: Christian L. Frock, clfrock, Doris Salcedo, One on One