Erica Gangsei on Story Board 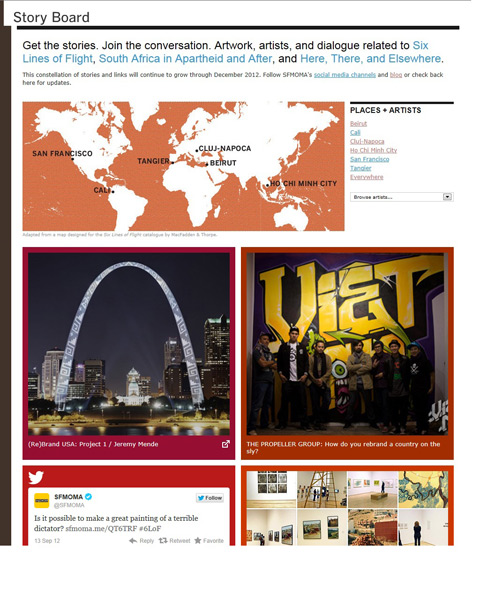 Recently I worked on a digital hub for the SFMOMA website, called Story Board, which expands on the exhibition Six Lines of Flight and other SFMOMA projects by braiding together museum-produced content with links to the web at large. The interface allows for new associations among the different stories that we tell around artworks and artists. For me, the most compelling of these stories are those that deal in cultural critique.

If, like me, you have progressive values, it’s hard not to feel trapped by culture — even counterculture. Capitalism is a trap, consumerism is a trap, language is a trap. We reinforce problematic paradigms every time we use the systems of symbols we rely on for communication. The more powerful something is as a tool, often the more baggage it brings along with it. We see this in advertising, in iconography, in the words we use every day. I’m not going to sell you on this idea (See?! The language of consumerism rears its swollen head) — either you agree or you don’t.

So we have to get a little tricky — find ways to work inside a system without reinforcing its hold on us. The Situationists called using a vocabulary or system against itself détournement. It’s also sometimes called culture-jamming, and can be seen in fake advertising projects, shop-dropping, and “happenings” by groups like Improv Everywhere. We also hear a lot about it in relation to the Occupy movement, as an anticapitalist protest tactic.

A museum can provide windows into worlds outside our own, each artwork functioning as a portal, a gateway to a constellation of new stories and ideas. But major cultural institutions dwell in this problem space, too. We love and rely on artwork for all its magical and transformative power, but we also must recognize that our culture industry is parasitical to the luxury goods industry. Cultural products come with hefty price tags. Takashi Murakami commented on this with his brilliant Louis Vuitton handbag shop inside his museum retrospective — leveraging his own commodification as critique even as he benefited from it.

In Six Lines of Flight and through Story Board, we see ingenious strategies of pitting vocabularies and legacies against each other and against themselves, like the Propeller Group’s projects Viet Nam the World Tour and Television Commercial Communism. A commercially successful media production company that understands just how problematic mainstream media is, the group applies considerable talent to tasks like “re-branding” Vietnam or reframing the tension between capitalism and communism.

Another example of using a charged visual language with a problematic history against itself is Romanian artist Adrian Ghenie’s task of representing Ceauşescu. Paintings of the Communist dictator were used to reinforce his power during his regime; Ghenie turns to painting Ceauşescu as a way of grappling with his legacy and its effect on Romanians of a certain generation.

When talking about artists using a vocabulary to critique itself, I can’t help but bring up Damien Hirst’s diamond-encrusted skull. It’s a work of art that is about mortality, sure. But it’s also very frankly about money — it’s an object that will always be in danger, just as we are always in danger, because of its value. Ghenie processes Ceauşescu by using one of the media with which the dictator reinforced his power. Hirst uses the basest media of the luxury goods industry to point at the deeper problem set of value in the art world. The cold, hard, sparkly brilliance of Hirst’s piece is well expressed in this video, by the incomparable Hennessy Youngman of Art Thoughtz.

And so we take yet another detour, and end up somewhere perhaps not even on the map. There be dragons here.

Erica Gangsei is manager of interpretive media at SFMOMA. She is also an artist, and has recently exhibited sculpture and stop-motion animation at Children’s Fairyland and at MacArthur B Arthur in Oakland.