Occupy to the Rescue: Revenge of the Hippies: Martha Rosler at MoMA 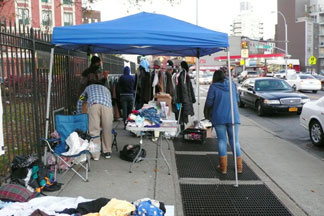 Call it the revenge of the hippies. Many people forget that back in the 1960s the hippies were just as obsessed with corporate corruption as they were with psychedelic drugs. When people talk about hippies these days they always forget about all their experiments with alternate economic systems and all the volunteering the long-haired kids did. Many ran free food programs, and some even created “free stores” in the Haight. The free stores in particular were thought up by the Diggers and were a place you could go and take whatever you wanted or leave whatever you wanted. What a concept — that’s about as anti-consumerist as you can get.

Poor people loved it. Rich people loved it. Hell, everyone loved it. Best of all, it wasn’t an art project done to get attention as some sort of conceptual “gesture.” As long as people brought things to replenish the stuff from time to time, it had the potential to continue on forever. But like all things hippie, it didn’t last.

Fast forward to New York in 2012. In conjunction with the Occupy movement here in New York, a loose organization of people has been steadfastly putting together a mobile free store. Often located in low-income neighborhoods, the group brings truckloads of donated items to a street corner or a park and then neatly arranges them as if it were a big yard sale. The big difference, of course, is that everything is free. But get this — they don’t even have a website! 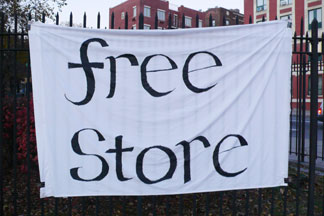 Shirts, pants, ties, coats, books, toaster ovens, and random things — are all there for anyone to take. It has been a common sight in the Bedford-Stuyvesant neighborhood, as well as around town.

As part of the hurricane relief effort, another volunteer organization, Occupy Sandy, has led the effort in feeding and clothing people displaced by the hurricane, and connecting them to resources. However, they were unprepared for the overwhelming donations showered upon them by well-wishers. As a result, some of the overflow is being given away through the efforts of volunteers at the free store. You could even say the old Digger idea now has some currency.

When Occupy Wall Street was located at Zuccotti Park in Manhattan, the various Occupy groups performed a distribution role to those in need; similarly, as the hurricane caused thousands to become homeless overnight, Occupy Sandy quickly created a supply chain and various neighborhood groups, such as Occupy Sunset Park; Occupy Astoria, Long Island City, and Queens; and Strike Debt — all mobilized overnight to help.

Without the burden of the bureaucracy of FEMA or the city of New York, Occupy groups just loaded people into vans and drove out to help.

Yet now, weeks later, people who were just fine before the hurricane are still living in shelters. The storm ripped apart houses and trees, crushed cars, and wrecked streets. Unless you see it, it’s hard to imagine.

Nobody thinks of New York as being as vulnerable as, say, New Orleans, but the outlying areas away from the main city are generally very isolated and relatively poor. The services available to them are correspondingly shoddy and inconsistent.

It’s interesting to witness these altruistic ideas come around again. All these different groups are working with churches to share space and volunteers. Jews, Christians, and Muslims are all helping each other out. Imagine that. 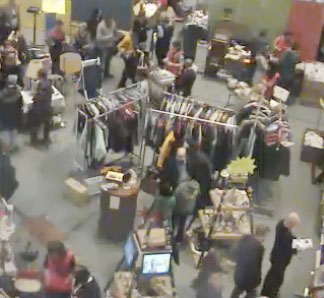 It’s worth noting that Martha Rosler’s solo show, Meta-Monumental Garage Sale, just opened at MoMA (live webcam view here). It is an especially timely and relevant show because instead of exhibiting giant sculptures or enormous Cindy Sherman–style self-portraits, her effort is just one massive garage sale.

Rosler is known for her political activism and is more aware than most of the various social currents at play in the news and in the media. Perhaps because of this awareness her installation is a sort of anti-art, if one can still use that term, which totally disregards the museum environment in favor of a “more real” social experience. In essence, the art object is so dematerialized it’s not even an object. It’s probably enough to give Lucy Lippard, author of  Six Years: The Dematerialization of the Art Object from 1966 to 1972, a nervous breakdown.