The Hurricane and Courtney Love 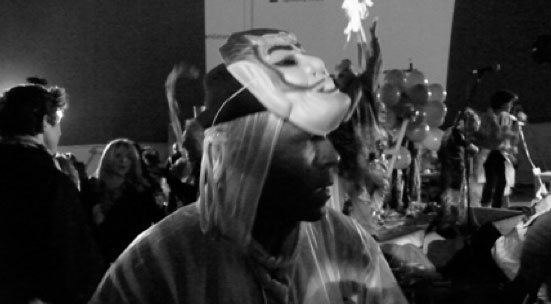 Kamau Patton at the PS1 Halloween party. Courtney Love Cobain can be seen over his right shoulder. Photo: Chris Cobb

I had no idea it was going to be a Bay Area art reunion when photographer Mariah Robertson convinced me to help make costumes at MOMA/PS1’s First Annual Artist’s Halloween Carnival and Parade. I also had no idea — until the last minute — that Courtney Love was the official judge for the costume contest.

I was impressed because, despite all of the warnings of end-of-the-world hurricane destruction, Mariah had managed to get dozens of other people there, too.

It was a challenge because the storm was set to strike the Eastern Seaboard that night, and the New York subway system was shutting down at exactly at 7 p.m. That meant anyone without a car risked getting stuck in Long Island City. But I went anyway. So did everyone else. What was I supposed to do: just sit at home and wait for the hurricane?

So after a 45-minute subway ride, I put on my Roman soldier costume and strongly considered whether I should make myself up like a Roman soldier zombie. As I was deciding, I could see that the party was already raging inside. When I went into PS1’s huge geodesic dome, I noticed that several Bay Area artists were in there, all clustered together. Toward the back of the room Mike Arcega was sitting on the floor making some sort of Monty Pythonesque helmet structure out of paper, and Laura Splan was dressed up like a bag of groceries, but with all the groceries falling out. SECA Award–winner Kamau Patton was there, too, as was artist Reuben Lorch-Miller. Near Arcega was former Co-director of the Lab Kristen Chappa, who now works as assistant curator at the Sculpture Center. She seemed extremely focused as she was cutting up fabric and gluing scraps together. For Mariah’s part, she was dressed as a bunch of grapes, wearing about a dozen big, purple balloons. It was a touch of levity in the midst of the storm’s gravity. 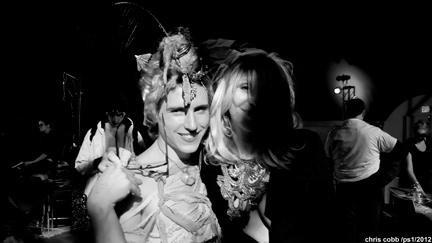 The premise of the event was that Courtney Love Cobain (formerly known as Courtney Love) and PS1’s new director, Klaus Biesenbach, were judging the costume contest, and the winner would get $1,000. But from the looks of things it was really just Courtney doing the choosing, as she moved around the crowded party. Ultimately, a man dressed as Marie Antoinette won the grand prize and several hugs from Courtney Love.

Right before the subway was about to close I noticed my camera’s battery light was blinking red, which meant it was basically about to die. So of course out of nowhere the winner of the contest asked me to get a picture of him with the rock star. Unfortunately there wasn’t enough power for a flash so I ended up shooting with available light. It left him fully illuminated but not her.

As he thanked her profusely, she left, only to turn at the last minute — she pointed at him and said, “Don’t spend the money on drugs, spend it on art!” Then, after an awkward pause and perhaps a micro moment of reflection, she said emphatically, “I really mean it!”