“…artistic and cultural projects that take a critical and emancipatory approach and attempt to resist the new oligarchy and its cultural alliances are emptied of real political substance and neutralized through the process of commodification. At the same time, the fervent embrace of iconic architecture…and the inflexible replication of the conventions of Western artistic modernism… have a devastating tendency to undermine the most inventive and original aspects of local cultural and creative energy.” Hou Hanru 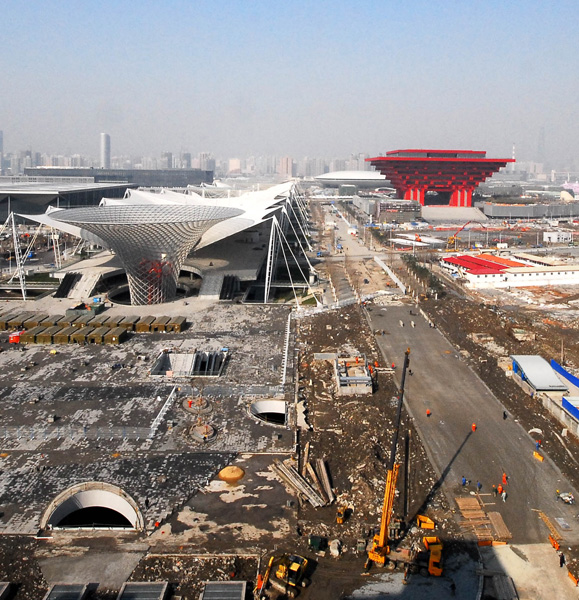 Shanghai 2010 World Expo site under construction in January 2010, 108 days before the opening

Over the past several decades contemporary art has become a genuinely global affair. The borders of the art world have expanded, and the myriad forms of expression comprising contemporary artistic practice have been widely embraced around the globe, moving far beyond established international art capitals such as Paris, London, and New York. In fact, it could be argued that much of today’s most energetic and innovative artwork is being made outside the traditional art circuit. With the rapid creation of new markets in Asia, Latin America, and Africa, and with the equally rapid establishment of contemporary art organizations, festivals, and biennials in regions that were once considered “peripheral,” the validity of the timeworn divide between center and periphery has become increasingly difficult to quantify. The most spectacular face of the new globalization can be found in the recent boom in museum construction throughout the non-Western world, especially in Asia, home of the new economic superpowers. In effect, a kind of unquestioned, or unquestionable, consensus about the virtue of this “museum fever” has emerged. In developing regions that wish to demonstrate their openness toward social progress, innovation, and the creation of a brighter future, the establishment of contemporary art museums is considered a necessity by the art community, the general public, and political and economic authorities.

The business sector in particular has come to value the development of cultural organizations as both a good investment and an opportunity to demonstrate a commitment to “social responsibility.” We see this reflected in the construction of a cluster of “world-class” museums on Abu Dhabi’s Saadiyat Island, including the Zayed National Museum as well as outposts of the Louvre and the Guggenheim. Singapore’s new National Art Gallery, at close to fifteen acres in size, is scheduled to open in 2015, and Hong Kong’s West Kowloon Cultural District, which boasts more than a dozen art and culture facilities, will soon be home to the world’s largest contemporary art museum, M+, also projected to open in 2015. An unprecedented number of museums are currently in the planning stages or under construction across China. Much of this activity—including Beijing’s Today Art Museum and Shanghai’s Minsheng Art Museum, Rockbund Art Museum, and Zendai Museum of Modern Art, all of which opened in the first decade of the twenty-first century—is sponsored by Chinese corporations; like their Japanese and Korean coun­terparts a decade ago, Chinese business groups have come to appreciate the political benefits of cultivating ambitious cultural projects. The Chinese government likewise recognizes the importance of building “soft power” through the development of art and culture. Plans for a national museum of contemporary art are underway in Beijing, and the Shanghai Contemporary Art Museum is under construction, with its opening (National Day, October 1) scheduled to coincide with that of the 9th Shanghai Biennale in 2012. Located in the converted power plant that was the site of the 2010 World Expo’s Pavilion of the Future, this new museum resembles a larger version of London’s Tate Modern and is part of the local government’s effort to ensure that all Shanghai residents will soon have a museum or other cultural venue within a fifteen-minute walk from their homes.

Most of these new museums have more or less been modeled on existing Western institutions. But such endeavors do not always translate smoothly to developing regions, where they can be undermined by inadequate planning and insufficient long-term financial support, as well as an absence of expertise and curatorial vision. Faced with such challenging circumstances, even the most enthusiastically conceived projects can be jeopardized by unforeseen crises (one thinks of the 2008 earthquake in China, where poor construction practices and shoddy building materials led to an extremely high death toll and widespread devastation). In addition, many of these projects are based on a relationship to the market system that is drawn from the entertainment industry (rather than the cultural field) and therefore encourages the spectacularization of artistic production. Obviously, this trend has evolved hand in hand with the logic of neoliberal capitalism—evidenced in the art market’s domination of both the regional and global art scenes. Increasingly, artistic and cultural projects that take a critical and emancipatory approach and attempt to resist the new oligarchy and its cultural alliances are emptied of real political substance and neutralized through the process of commodification. At the same time, the fervent embrace of iconic architecture (which often translates into museums that are oversize and extravagantly grotesque) and the inflexible replication of the conventions of Western artistic modernism (such as “white cube” gallery spaces) have a devastating tendency to undermine the most inventive and original aspects of local cultural and creative energy.

The incongruities created by structuring a contemporary art scene around an armature of outdated institutional conventions are inevitable and not limited to the East. Contemporary art is universally the product of intense negotiations between a true multitude of expressions, and it reflects a variety of singular interpretations of local contexts that are necessarily complex, improvisational, and open to continuous change.

During the past ten years, the contemporary art scene has experienced a major structural transformation. The market is usurping biennial culture to become the center of focus: art fairs, which emphasize sales as much as creative expression, are the new gathering points for the global art community. More and more, museums and other cultural institutions are finding themselves at the mercy of market forces, while artistic production itself increasingly resembles a commodity industry. In the case of Asia and similar emerging economic powers on the front lines of this mutation, it is particularly apparent that the status, function, and conditions of survival of independent art organizations are more threatened than ever, yet it is equally clear that they have never been more neces­sary as a force of critical resistance. 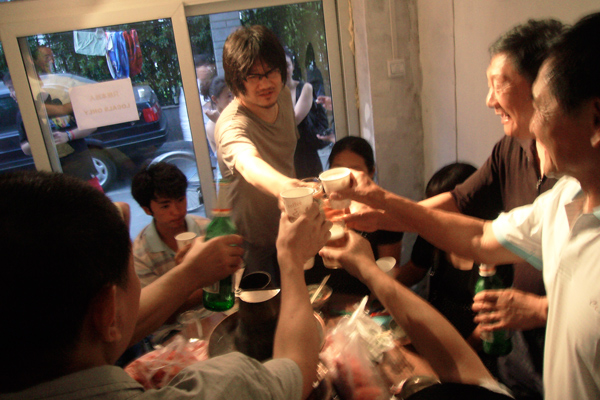 In this era of market dominance, the privatization of urban space and the retreat—and even disap­pearance—of the public sphere is a real threat that we must face. This is a matter of particular urgency for the art world. The transformation of the urban landscape—driven by aggressive gentrification and ambitious real estate development—is uprooting the very terrain for art’s social engagement and contributing to the dismantling and destruction of grassroots communities that might once have stemmed the tide of rising market forces. Fostering solidarity and collaboration between art communi­ties and the wider public is now vital to the survival of both the art world and urban society as a whole, and it is imperative that we invent new ideas and strategies for the preservation and protection of the public sphere. Independent art organizations and other grassroots activists have answered the call by creating projects and events that encourage interaction between artists and local audiences. There is fresh momentum to reestablish public spaces where all citizens can come together and collectively reimagine society through artistic actions.

Hou Hanru is a prolific writer and curator and a consultant to several international cultural institutions, including the Guggenheim Museum, New York; the Deutsche Bank Collection; the Times Museum, Guangzhou; and the Rockbund Art Museum, Shanghai. He was recently the director of exhibitions and public programs and chair of the Exhibition and Museum Studies program at the San Francisco Art Institute. Hou received undergraduate and graduate degrees from the Central Academy of Arts, Beijing, and has curated major biennials in Johannesburg, Shanghai, Gwangju, Venice, Istanbul, and Lyon. He is currently organizing the 5th Auckland Triennial, New Zealand. A guest editor for Flash Art International, Yishu, and ArtAsiaPacific, he is published regularly in books and contemporary art journals.