“Several intentions were announced in early press releases, but one of the most important functions of the gallery was to serve as a (store)front for my ‘guerilla art’ activities, for which the imprimatur of the gallery structure confers legitimacy and lays down a smokescreen … A basic philosophy of the Samore Gallery has always been subversion, sabotage, and upheaval.” 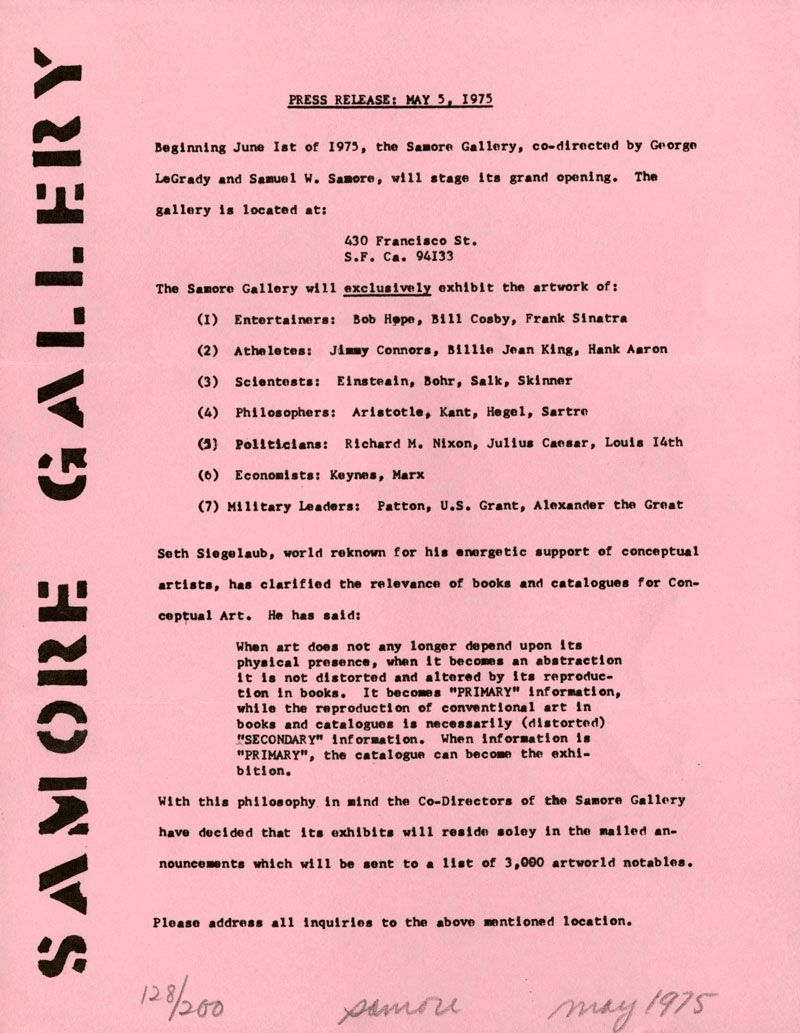 On July 4, 1974, the suspect walked into the Oakland Museum. Pretending to be a preparator, the young man proceeded to move two works by Edward Weston and Minor White from the photography corridor into the main galleries devoted to painting and sculpture. Samuel W. Samore allegedly reenacted what he called The Oakland Museum Independence Day on the one-year anniversary of this event.

The motives are quite clear, if we consider the artist’s larger commitment at the time to criticize and target institutional practices that suggested that the art establishment did not recognize photography as a major art form on par with painting and sculpture. The segregation by medium and the institutional priorities for gallery real estate and acquisition funds were key symptoms of the problem. Moreover, in the examples of Sam Samore’s manifestos and letters of criticism on file, he believed that the narratives museums construct through their collection rotations betrayed certain biases, for instance, a privileging of the modernist tradition or  a given dominant style. Would the general public of the Oakland Museum be led to assume that contemporary photography in California had withered on the vine after Group f.64? These tensions within and between disciplines have played out to an extent in the history of Bay Area Conceptual art. Samore in fact playfully insisted on using drawing instead of photography to “document” the crime scenes of his museum interventions in that era.

In May and June 1974 Samore placed photographs and written messages behind the paintings and sculptures on display as his “concurrent exhibitions” at the San Francisco Museum of Art, Los Angeles County Museum of Art, the Art Institute of Chicago, and the Museum of Modern Art (MoMA) in New York. He not only inserted his presence into the museum along the lines of interventions like L.A.–based Jeffrey Vallance’s hand-painted electrical outlet plates at LACMA (1977), but specifically focused his critique of how value was unequally assigned. As Samore would later complain about the University Art Museum at Berkeley, “All the photographs exhibited in their permanent collection display are behind the paintings and sculptures. They don’t show any alongside them. I put them there: reproductions of the masters and contemporary heroes.” (Samore, “Photography Ain’t Art,” La Mamelle, 1976, pp. 42–43) 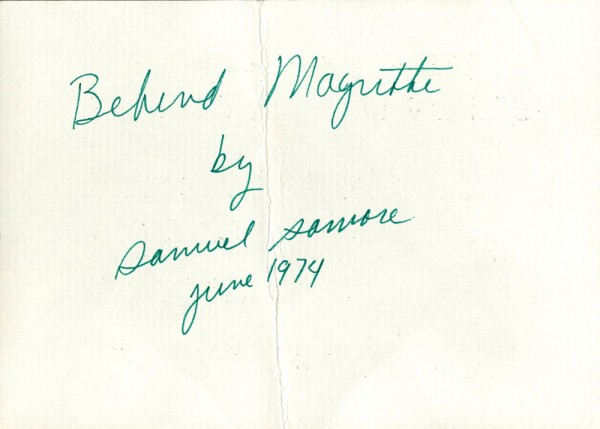 Samore also surreptitiously installed artwork labels with his name next to various utilitarian objects at the Oakland Museum and University Art Museum at Berkeley (Nameplate, 1974 and 1979). After all, he concluded if the museum would “eventually recuperate all incursions by the ‘avant-garde’ into its domain, why not start from the inside and include the objects (exit signs, water fountains, plants, electrical outlets, air vents, and so on) that help make the museum a comfortable and efficient fort of art?” (Samore, Spot, 1985) To dismiss Samore’s creative disruptions as mere lighthearted pranks or one of this anti-hero’s self-created myths would be to ignore the underlying painful truths of these situations. Samore’s gestures makes for a good story. In the end, does it really matter whether or not these are fictionalized accounts? Or failed attempts to engage the respective curators in discussion about these issues?

John Szarkowski, director of photography at MoMA, was one of the recipients of Samore’s personal appeals for better integration and representation of contemporary photography. All 100 collection works illustrated in Szarkowski’s canonical Looking at Photographs (1974) were appropriated for Samore’s show Xerox Prints (September 1974) at the Art Co-op in Berkeley. Other exhibition models included the display of anonymous photography on 25 BART subway cars and inserting hand-signed photographs at random into art, psychology, and sports books in the San Francisco, Berkeley, and Oakland public libraries for individual readers to discover and choose to leave or take (Public vs. Private: A Difference In Environment and the Question of Ownership, August 1974). His proposals ranged from the absurdist installation only perceived by nearsighted individuals without their glasses to the grand poetic gesture of dropping 100,100,100 photographs of the sky over the city by helicopter.

While this early career mythology seems to be disassociated from the New York-Paris-Bangkok–based artist’s current identity and production, there is an interesting ongoing concern with collapsing the distinction between photography and painting. Strategies of recto/verso coding, inside/outside perspectives, and fragmented text continually manifest in different ways. I find his unrealized proposals on file for alternative viewing environments fascinating in light of his later approach in the 1990s to creating experiential conditions. His “fairy tale installations” construct a fantasy-based atmosphere for absorbing his stories delivered by actors—watching a ceiling-mounted television while reclining on a bed (The Magic Bed, 1995) or listening to an audio piece within a magic forest (Forest of Schizophrenic Love Stories, 1998) or in an outdoor jacuzzi (Well of Carnal Appetites,1994). 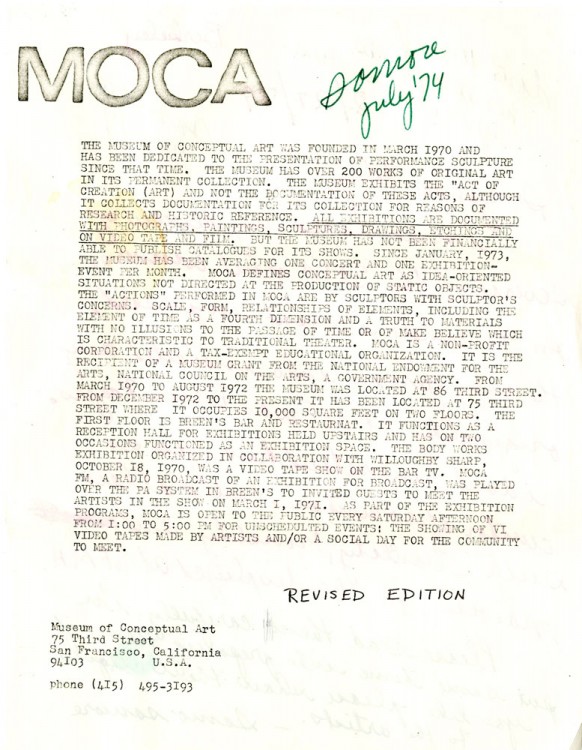 “Two of the earliest and most influential Bay Area conceptualist photographers were Lew Thomas and Sam Samore … Samore became known for work of a more dadaist bent, often laced with social commentary in which art world practices were a conspicuous target. One project involved the founding of a ‘photographic museum’ whose activities, including exhibitions, consisted solely of mailed announcements.” —Thomas Albright (Art in the San Francisco Bay Area, 1945–80: An Illustrated History, pp. 203–4)

The inaugural issue of Carl E. Loeffler’s La Mamelle Magazine (Summer 1975) featured the May 5, 1975, press release (above) and a revised one on June 1, 1975, for the Samore Gallery sent to the list of “art world notables”. Samore’s interest in the crossover and interaction between disciplines was brilliantly captured in his and Barry Bloom’s series of published interviews, The Athlete as Artist (1976–77), in which athletes like Joe Namath, Charles Pasarell, and Kareem Abdul-Jabbar were each asked to talk about their personal philosophy and the relationship of sports and art. Competition and celebrity were further investigated in On Fame (1978), his video interviews with five contemporary photographers who had experienced recent career success, contrasted with his man-on-the street polls in San Francisco conducted by Judy Dater to see if their names were recognized outside of the context of a specialist audience. This project and others, like Mike Mandel’s The Baseball – Photographer Trading Cards (1975), humorously spoke to the sense of status anxiety of the photography community as it was gaining more visibility, media attention, and commercial support within the art world. 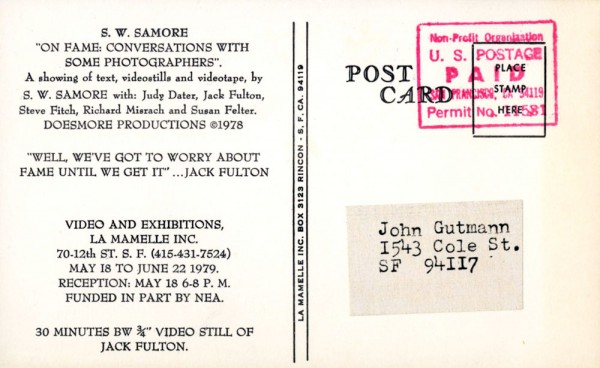 Samore found a key supporter and friend in photographer Lew Thomas, known for his significant publishing and curatorial contributions, including the seminal SF Camerawork show and book Photography and Language (1976, NFS Press) of which Samore took part. He likewise published his theoretical writing and criticism and pushed the boundaries of exhibition-making and installation practice in such projects as 8 x 10 (1974). Thomas proposed and cocurated with Van Deren Coke, SFMOMA’s director of photography, the exhibition Photographs and Words (1981), which represented a core group of artists whose practices were associated with “problematic photography” as he defined in the press release as “an extension of conceptual art, but photography and text are presented as interchangeable objects of visual meaning. Characteristic of this class of photography is the construction of images in formats derivative of mechanical reproduction. The work is consistently abstract expressing a dialectical method.” Thomas arranged for the publication to take the innovative form of full-page advertisements in the summer issue of Artforum designed by each artist — Lutz Bacher, Peter d’Agostino, Hal Fischer, Meyer Hirsch, Donna-Lee Phillips, and Thomas — which offered a simultaneous, touring context for the exhibition addressing consumer society and the messaging of advertising. Creating a mini-retrospective for the Samore Gallery within the museum, Samore’s installation included a constellation of text, photographs, and objects connected with tourism, his artist books (Doesmore Press), and examples of past proposals that had been rejected by SFMOMA. 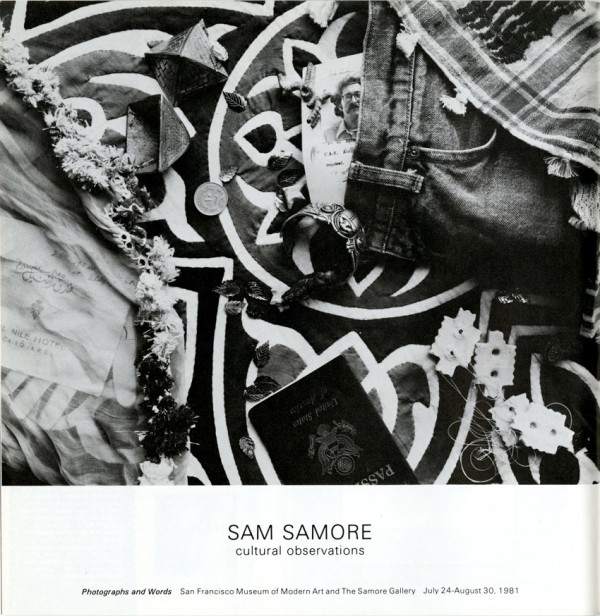 Sam Samore artist page from the Summer 1981 issue of Artforum