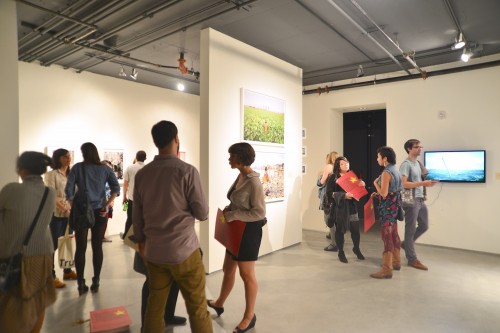 Zoe Butt, email; Sunday, September 27, 2012
Greetings from the air — somewhere over the Pacific Ocean, I imagine — moving from Bangkok to Fukuoka to Kitakyushu.

I am sitting in the dark and trying to work out where my time is inside my body. I think it’s quite confused. The head is a swirl of visual similarities where geography starts to mean less and attitudes become the character that marks a place.

Were I to try and comment on the recent histories of Berlin and Saigon/Phnom Penh, I would say that, looking back to the late 1980s, Berlin has done much, not only to reconcile its bloodied past but also to thrive as a cultural destination, whereas Saigon and Phnom Penh are still struggling to articulate their dreams as their memories sit under political lock and key. Needless to say, the poesis of such comparison rests in the irony that Vietnam and Cambodia are two of the most internationally desired holiday destinations in Southeast Asia.

Yes, I have met all the artists in the Poetic Politic show, and also Vandy Rattana and Kvay Samnang from Cambodia, and have had the pleasure of spending time with them. Some I have known since working as the assistant curator at the Queensland Art Gallery in Australia (2001–7), while others have been slow friendships built since I started moving between China and Vietnam from 2007.

Inside Poetic Politic there are numerous sites from which these artists hail — VÕ An Khánh (b. 1936), the most senior in the show, is from Bac Lieu in Southern Vietnam; An-My LÊ (b. 1960) left Saigon when she was 15 and now currently lives and works in New York; VANDY Rattana (b. 1980), from Phnom Penh, is now relocating from Paris to Taipei; while PHAN Quang (b. 1976) moves between his home in Saigon and his “studio” in the countryside of Bao Loc. This is just an example of the range of the 10 artists in the show, which does not set out to be a survey, but rather an introduction. The community of artists in Vietnam is small, and there is increasing interaction with the equally small yet vibrant art scene in Cambodia. Many of these artists are friends and have collaborated in the past and continue to do so.

Moira Roth, email; Thursday, September 27, 2012; Berkeley, California
Thank you for your marvelously rich letter written on the plane as you flew from Bangkok, Thailand, to Fukuoka and to Kitakyushi in Japan.

I keep imagining it is handwritten and has appeared early this morning in my mailbox with a Pacific Ocean stamp on it.

And, as I reread it, I also keep remembering my own visits to Cambodia (1999) and Vietnam (2005) and the texts I wrote in an attempt to capture my memories of these and to explore further in detail what I had earlier addressed in my Summer 2001 Art Journal essay: “Obdurate History: Dinh Q. Lê, the Vietnam War, Photography and Memory.”

I remember in Cambodia my horror at seeing the Tuol Sleng Museum of Genocide and the Killing Fields, and in Hanoi visiting four North Vietnamese artists who told us about their experiences of the American-Vietnam War and showed us drawings and paintings they had made during that time: Van Da, Truong Hieu, Nguyen Thu, and Vu Giang Huong. After Hanoi, I flew down to Ho Chi Minh City and stayed for a while with Dinh Q. Lê, while he was feverishly at work creating a second version of his Mot Coi Di Ve, his “tapestry” of hundreds of photographs. (See my “The Obdurate History of Mot Coi Di Ve: Spending One’s Life Trying to Find One’s Way Home,” in A Tapestry of Memories: The Art of Dinh Q. Lê, Bellevue Art Museum, Washington, Fall 2007).

This post is a continuation of Poetic Politic: Reflections in Berlin from October 12.