From Berlin to San Francisco: Gwenael Rattke and D-L Alvarez

Is there a still-thriving tradition of gay (or at least homoerotic) collage, with the Bay Area as its potential capital? That question has lingered in my mind when I’ve glued images from After Dark to Maria Callas box sets (or placed old horror movie hand gestures in new contexts), and when I’ve met other local gay men devoted to similar practices, regardless of their commercial viability. With Gwenael Rattke’s new show at Romer Young Gallery, his third for the space, I’m inclined to say the answer is yes. 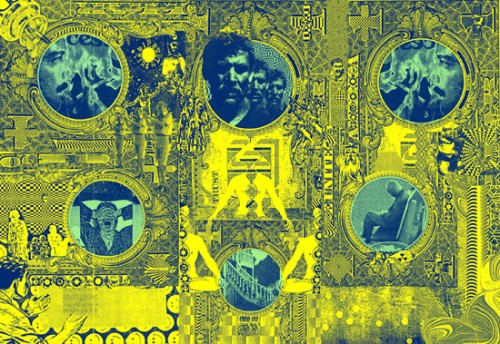 Rattke and I have more in common than starring roles in a movie (by Gary Fembot) called Mondo Bottomless. When I first met him in the mid-’90s, we both attended and participated in Q-TIP (Queers Together in Punkness), a series of events primarily at Epicenter Zone, a community space above Clothes Contact on Valencia Street. The realm of queer zines was exploding, and soft-spoken Rattke created one titled Easily Grossed Out.

Scissors or razor, paper, glue: the basic tools and ingredients in do-it-yourself zine production are also central to collage, the humble yet vast medium in which Rattke now excels. Black ink traces (more like mammoth purple pools) of his punk rock photocopying past can be found in his latest work at Romer Young, but the means of expression have expanded or graduated from stapled pamphlets to intricate large-scale acrylic silkscreens, and the visual language has shifted from paragraphs of text pasted over smudgy images to complex—alternately grid like and phantasmagorical—worlds of totem and symbolism. 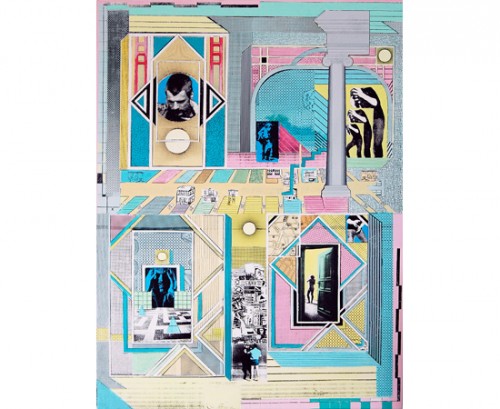 The sheer density of imagery makes it impossible not to mention Bay Area collagists Jess and Lawrence Jordan in relation to Rattke’s work. There’s also something of Jack Smith’s mysticism to Jeita Grotto, in which a mammoth disembodied head belonging to Turkish film icon, novelist, and political firebrand Yilmaz Guney overlooks an idyllic nature scene that holds two men in suspense. Even Kenneth Anger seems viable as an artistic father (or funny uncle) figure of sorts, primarily in the way Double Portrait of Yilmaz Guney, with its lurid color and full-frontal terrible beauty, could almost pass for a still of Marjorie Cameron from Anger’s 1954 Inauguration of the Pleasure Dome.

But Rattke is forging his own vision, one that’s not without a sense of humor: a large zipper seems to separate two dimensions in Lonely Avenue, one of a few new pieces with Monopoly currency hues. Many of the works at Romer Young present male figures at the threshold of new realms, or trapped within frames, with bodily gestures that could alternately be read as celebratory or agonized. The aptly-titled Patterns and Perspectives contains a seemingly endless array of planes of vision, while Golden Era works similar wonders with depth of field. My favorite new work might be Der Schein, a giant fluorescent yellow reconfiguration of a dollar bill which subtly incorporates everything from Op Art patterns to smiley faces. 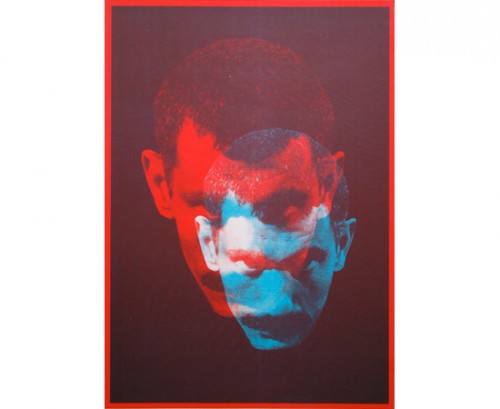 It might be cheating or exaggeration to claim Rattke as a Bay Area collagist, as Berlin as been his chief home base for many years. But his latest show at Romer Young is connected with a residency at the Dogpatch district space that qualifies as the latest of many Bay Area connections over the years. In the past, Rattke has collaborated or starred in films by San Francisco’s Fembot, with whom he shares retro-futurist if not science fiction aesthetics. He’s also frequently shared exhibitions and projects with D-L Alvarez, another artist who has bounced back and forth between Berlin and the Bay Area.

There are no collage works in “D-L Alvarez: Matrix 243,” which is nearing the end of an almost three-month run at Berkeley Art Museum. The show’s centerpiece is The Closet, a series of 18 pieces in which Alvarez impressively uses graphite on paper to mimic and magnify the effect of digital distortion—of misbehaving, anarchic pixels within a fractured image on an eroded videotape or scratched DVD. 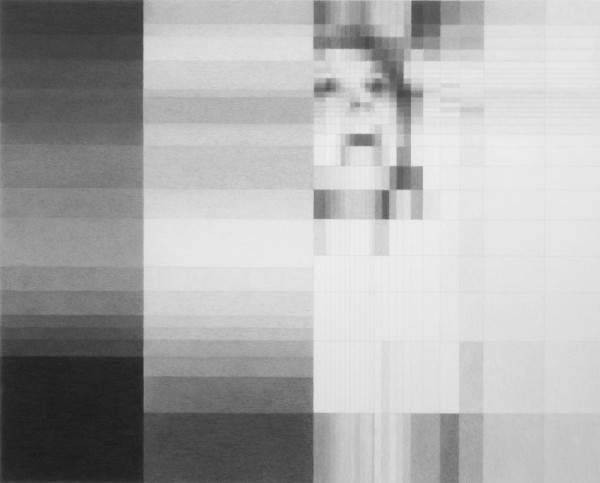 Horror, particularly horror cinema, has been a resonant touchstone of Alvarez’s art, and the source of The Closet‘s imagery is a key scene from John Carpenter’s 1978 film Halloween in which The Shape, a.k.a Michael Meyers, attacks heroine Laurie Strode, played by Jamie Lee Curtis, as she hides in the closet of a suburban home. The Closet‘s title adds another layer to the already-loaded familial psychosexual dynamics in Carpenter’s film, while also suggesting that the setting is Carpenter’s update of Hitchcock’s shower, where Curtis’s real-life mother Janet Leigh acted out the most famous scene in 1960’s Psycho.

Subsequent novelizations and film installments of the Halloween series reveal that Michael Meyers and Laurie Strode are brother and sister, which makes The Closet the site of an incestuous primal scene in which kinfolk take turns stabbing at each other. (A few years before Faye Dunaway in Mommie Dearest, Curtis’s character makes inspired impromptu use of a wire hanger as a weapon.) Alvarez’s selection of this particular scene from Carpenter’s original, and his graphite representation of distorted or shattered images, resonates with a convulsive psychosexual humor similar to that of Michael Robinson’s video Light is Waiting, in which an ordinary episode of the Olsen twin television showcase Full House mutates into a spectacularly psychedelic tribal ritual. In its explosive use of black, white, and grey, The Closet resembles stills from Austrian avant-garde master Peter Tscherkassky‘s 1999 film Outer Space, which also mines late-’70s early-’80s horror (1982’s phantom rape movie The Entity). 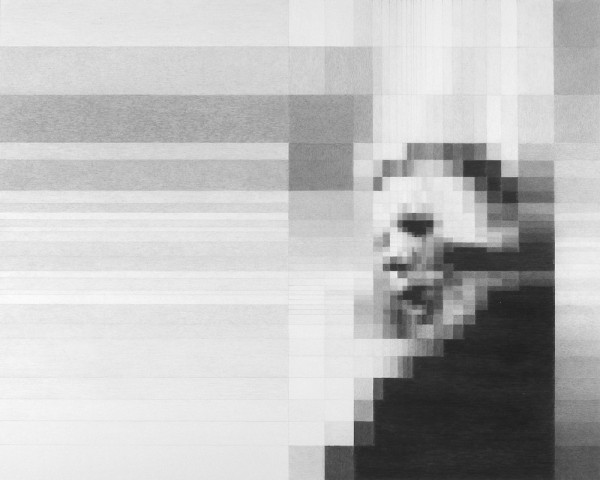 A certain revealing and even liberating visual voodoo takes place when digital technology malfunctions, as if the wild spirits beneath a movie’s or TV show’s smooth surface are being unleashed. (I’ll always recall a time when my home cable Comcast transmission was riddled with tics, and Lauryn Hill’s face began percolating like the popcorn she was munching in the Fugees’ video for “Killing Me Softly.”) Alvarez’s The Closet taps into this strange magic to reveal beautiful abstract block patterns, and to show that at the onset of the AIDS era, the suburban family closet is a volatile zone indeed.