Beyond the Valley of Gallery Girls 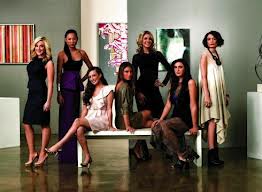 The triumph of reality television may be everyone’s loss, but surely scripted drama faces the bitterest defeat. Yet the devil’s advocate in me feels it’s a challenge to be met, and that only the most original and audacious works today are up to the task. Even when overtly sensational, today’s cinema verite generally seems secondhand in comparison to “reality.” All of which brings us to Gallery Girls.

Bravo’s series focusing on young women in the New York art world is “reality” tailored and structured to fit one of the least respected — and at times most pleasurable — forms of scripted drama: the young woman’s coming of age, or “make it in the big city,” tale. Its narrative content and arc resemble films such as 1998’s The Last Days of Disco on back to 1959’s The Best of Everything, in which Joan Crawford is a corporate Medusa overseeing a gaggle of post-collegiate career girls. Much like the 1967 screen version of Valley of the Dolls, Gallery Girls presents its assortment of personality types as acquaintances, if not friends. (When Sharon Tate’s character says, “It’s old home week,” halfway through Valley, the statement’s a hoot because the screenplay has scarcely managed to place the main characters in the same room.)

Over the course of eight episodes, Gallery Girls plots the travails of Chantal Chadwick, Kerri Lisa, Liz Margulies, Claudia Martinez Reardon, Angela Pham, Amy Poliakoff, and Maggie Schaffer. In the tradition of The Real World and, more closely, Bravo’s lucrative Real Housewives franchise, these women are presented on a first-name-only basis. And just as many of The Real Housewives‘s “real housewives” aren’t in fact married, let alone housewives, at the beginning of Gallery Girls exactly none-to-one of the series’s titular figures is employed at a gallery.

Laconic Chantal and high-strung Claudia possess two-thirds ownership of a lower Manhattan gallery-boutique, the illogically named End of Century, which has shown work by former SF artist Dean Dempsey. Fresh out of rehab and bitter as a strong Manhattan, uptown Liz is the daughter of successful collector Martin Z. Margulies. Angela wants to translate her gigs as an event photographer into a fine-art career — by taking pictures of melancholy people in front of donut shops. Kerri, Maggie, and Amy are in turn go-getting, sniffly, and boozy variations of the art world intern.

Suffice to say, when it comes to art world portraiture, we are not in the realm of Janet Malcolm coming face to face with Rene Ricard in “A Girl of the Zeitgeist.” Gallery Girls‘s closest thing to an art star is the gallerist Eli Klein. Here, ordering Maggie to fill a dog bowl with water or to count the rocks in a Shen Shaomin bonsai installation, Klein plays the cad, bringing all the swagger of Isaac Mizrahi to the art of heterosexual flirtation. Jane Holzer, formerly Warhol superstar Baby Jane Holzer, floats in and out of some episodes, now a dead ringer for actress Jennifer Coolidge. Art advisor and author Sharon Hurowitz plays the mentor role to Kerri and Amy with understated grace.

Gallery Girls keeps things facile to the degree that an event as gargantuan as Art Basel is primarily a backdrop for plot points such as, “Will Liz and Chantal continue to snub each other?” Nonetheless, the show does manage to graze over different facets of and jobs within the art industry, while giving time or product placement to schools (School of Visual Arts, where Liz studies), auctions (Phillips de Pury & Company), select galleries (The Brant Foundation, Brenda Taylor Gallery, Bernaducci Meisel Gallery), and of course, artists. Make of it what you will that the artist who gets the most air time is known as The Sucklord.

Map-based inter titles work to present Gallery Girls as a turf war of sorts, with the Upper East Side (represented by Amy, Liz, and Maggie) pitted against black-garbed Brooklyn (Angela, Chantal, Claudia). It’s Maggie, whose name rather appropriately matches that of the baby in The Simpsons, who buys into the divide most egregiously, complaining that Brooklyn is “the worst, most ghetto place” and worrying that “someone might jump out from one of the abandoned buildings” and rob her during a trek there. The daughter of a man who helped invent neon, Maggie comes off as the opposite of bright.

For most of the season, it’s open season on the friendly but brusque Amy, with all of the characters taking pot shots or worse at her, which makes the season finale, in which she displays an actual understanding of art (and shockingly, is rewarded for it), all the more satisfying. (Liz, for example, couldn’t be less interested in the work at Eli Klein, where she’s interning). In real life, nice girls might not finish first, but in this version of reality TV, they can.

Nonetheless, the crowning irony of Gallery Girls has to be that until the very last episode, not a single one of the show’s main characters, including gallery owner Claudia, has made a single cent off of art. The underlying possibly unintentional message is that the idea of money far outweighs the reality of it in today’s art world. (Lord knows there’s only table scraps, if that, for arts writing.) That’s what I took from the series, along with copious needless illustrations of the fact that it sure helps to have rich parents.