Xe Ôm Drivers Of The Mind: The Journey Of Sàn Art 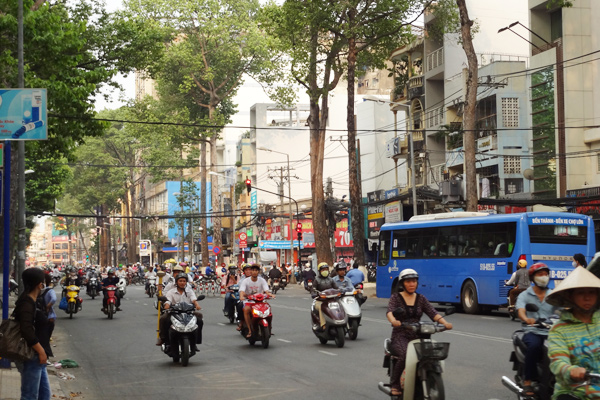 Xe Ôm Drivers Of The Mind: The Journey Of Sàn Art

Xe ôm ¹: On the corners of most congested inter­sections a man can be found atop his xe, his feet casually crossed and resting on the handlebars as he reads the paper. He waits for his passengers, who will straddle his motorbike and entrust themselves to him as he carries them to their desired address. The route he takes will be his own—perhaps the fastest, or the most scenic, or the least congested, or the most indirect (to hike the price). Regardless, it is his path that yields the destination.

Street pavements are a curious and multipurposed territory in Vietnam. At times the paving is wide, its girth and colorful patterning remnants of the colonial era that still echoes in the heart of a city now heavily monitored by diplomatic agencies. Elsewhere it is a hand-sculpted wash of cement that divides business properties from the street vendors selling bánh cuόn, bánh mì, and cà phê sũra đá [pork rolls, meat-filled sandwiches, and sweet iced milk coffee] to customers squat­ting on iconic red plastic stools scattered along the road. On other streets the pavement is quite simply nonexistent. Here traffic collides with those destitute or brave enough to travel in the absence of a xe máy, or motorbike. 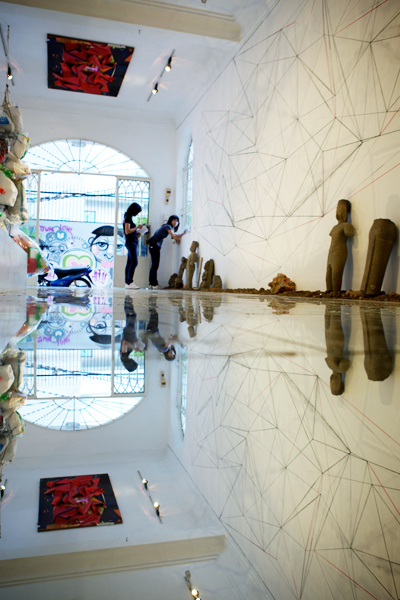 To Ho Chi Minh City with Love: A Social Sculpture, an art project by Phong Bui, in collaboration with local artists. Installation view at Sàn Art, 2011

What is striking about this ubiquitous two-wheeled vehicle, a Vietnamese fifth limb, is its ability to facilitate movement. Nothing is too large or too cumbersome for it to carry. Its uncontested claim on any pedestrian pathway in Vietnam is testament to its necessity. The tourists may complain that pedes­trians have no right-of-way in this urban everyday, but locals argue for the xe máy’s right to climb these pavements when they are choked by traffic or a heavy load needs to be collected at a crowded doorway. The ways that xe máy are guided, maneuvered, and fitted to suit personal needs are emblematic of Vietnamese society and its stunning ability to make use of existing tools. But what occurs when a problem has no adap­tive tool? In the context of Vietnamese contemporary art, the lack of instruments for artists to work with is a critical issue. Today’s artist must build a pavement for the movement of thought, while also becoming a xe ôm of the mind.

Amid the growing sprawl of colored concrete and mirrored steel skyscrapers, and along the metal shanty–lined canals of Saigon², there are plenty of xe máy traversing the familiar pavements of the city’s commercial trade, but few xe ôm carrying the minds of the artistic community toward greater innovation and experimentation. The opening night of the first exhibition at Sàn Art (on October 3, 2007) in Saigon was a significant moment. The crowds that gathered for the event were an eager and genuine lot, buzzing with energy and keen to embrace the social friction that came with combining the three tiers of the community: local, foreign, and Viḝt Kiê`u³. The exhibition showcased the skill of Saigonese draftsmen, and it is this constituency—the local—that Sàn Art has continued to nurture and promote. As an artist-initiated, independent, nonprofit contemporary art center and reading room, Sàn Art (sàn means “platform”) offers a space for artists to participate in and transform, operating as an essential hub for experimentation and the meeting of talent, both local and foreign. In southern Vietnam, however, such pavements of thought must be negotiated with particular care.

Historically, southern Vietnam held the seat of a traitorous community in league with the United States. Its central port of Saigon, once cultivated by expatriates as the “Pearl of the Orient,” has had most of its heritage plundered and torn asunder by a wealthy elite who collects the coin bags for the ruling government officials of the north in Hanoi, Vietnam’s capital. Today, Saigon is also the interna­tional economic hub of the country, and steady droves of youths from rural as well as other urban locales set their sights on the city, hoping for professional success. Politically, the communist seat of power in Hanoi gazes south with great suspicion at any entre­preneur who is pushing new limits, particularly when these individuals are Viḝt Kiê`u and not sympathetic to the communist cause. (Ironically, the Vietnamese government is aware that many international trade relationships would not progress without the skill base of the Viḝt Kiê`u; the nation’s educational system does not produce a labor force that can meet the demands of a global economy.) 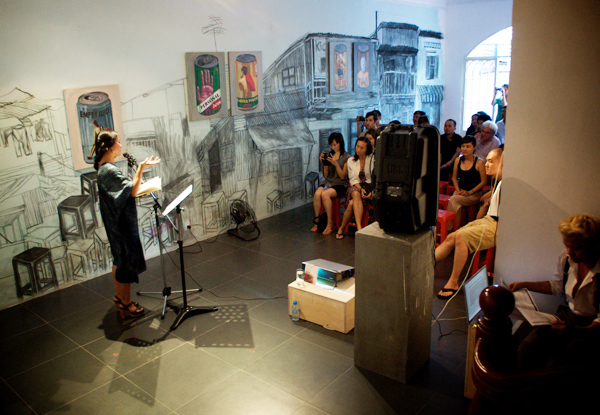 The Bô Văn hoá (Vietnamese Communist Cultural Ministry) carefully monitors all public organized cultural activity and, like Orwell’s Squealer, stamps its trotters in a flurry of paper detritus, unleashing bureaucratic demands and restrictions on anything to do with history, politics, or social conflict. Art events are particularly bothersome to the robotic, directives-as-bible, power-hungry officials who police such activities. Gatherings of more than five people require a permit, and, not surpris­ingly, the application’s lingo is rarely transparent and often deliberately evasive. The monitors in the south are particularly stringent; their ideological seeding machine favors and encourages the materialistic urges of its citizenry at the expense of local culture.

The newly built, neon-lit Prada and Louis Vuitton stores, along with the increasing number of glass towers with breathtaking rooftop views of the city’s continued expansion, reflect the interests of Saigon’s most socially influential class, which has framed the country’s definition of culture as “commodity.” Meanwhile, the historical relics of Vietnam’s past are pursued only by the avid tourist. Underfunded and undervalued, institutions such as the Bảo tàng Mỹ thuật Thành phô´ Hô` Chí Minh (Ho Chi Minh City Fine Arts Museum) occupy majestic French colonial buildings in great need of repair, their collections requiring urgent conservation. 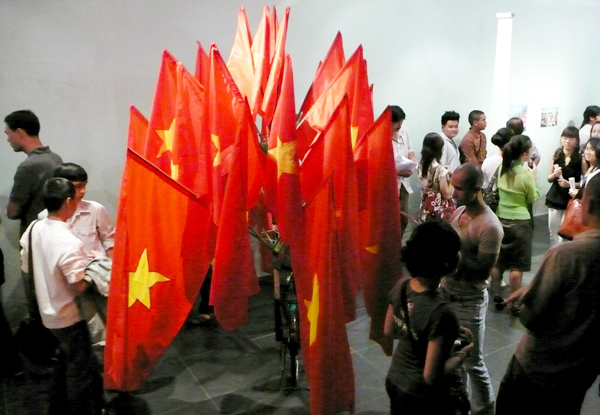 Commercial galleries catering to the tourist market clamor for space in the central avenues of the city, their focus predominantly on artists who repeatedly revisit successful imagery and subjects in the interest of a sure sale (a nationwide phenomenon). The national arts education curriculum proudly clings to the now outdated École des Beaux-Arts system, an import of the French occupation, and its reverence for the plastic arts. Regrettably, no public university in the country teaches the history of contemporary art. The field’s emerging practitioners are thus doubly challenged, faced with a local audi­ence that has had no exposure to its interdisciplinary forms and concepts and stymied by museums-for-hire that routinely fail to offer critical scholarship or to showcase and collect works that reflect the growing experimentation of art making today. …

Notes
1. A literal translation of xe ôm is “motor hug,” after the manner of traveling on a motorcycle taxi: the passenger sits behind the driver and may hold onto him for safety.
2. Rather than Ho Chi Minh City, the name that has been in place since the communist takeover of South Vietnam in 1975, I have chosen to use Saigon, the name preferred by the city’s local population.
3. Viêt Kiê`u literally translates as “Vietnamese sojourner.” It commonly refers to the overseas Vietnamese diaspora, particularly the boat refugees of the Vietnam War. The Viêt Kiê`u community, until the mid-2000s, was heavily ostracized by locals and government alike. The need for specialist expertise in trade and communications, qualifications earned by Viêt Kiê`u abroad and now employed within Vietnam, is greatly contributing to a positive  and inclusive national shift in social attitude.

Zoe Butt is executive director and curator for Sàn Art, an independent, artist-initiated gallery space and reading room in Ho Chi Minh City (san-art.org). Previously she was director of international programs at Long March Project, a multiplatform, international artist organization and arts project based in Beijing. From 2001 to 2007, she was assistant curator of contemporary Asian art at the Queensland Gallery of Modern Art, Brisbane. For more than ten years she has organized exhibitions and contributed to publications devoted to contemporary Asian art.