“It has become increasingly apparent that contemporary art is no longer defined by a few primary centers; it is now composed of many centers, small and large, each possessing unique histories, constituencies, and ethnic identities.” 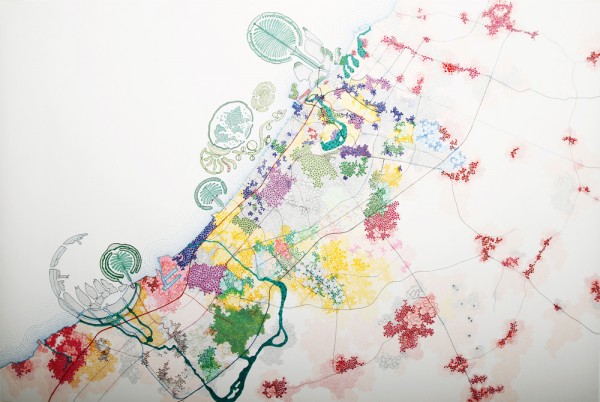 This text is excerpted from the exhibition catalogue for Six Lines of Flight: Shifting Geographies in Contemporary Art. The exhibition convenes artists from six cities around the globe: Beirut, Lebanon; Cali, Colombia; Cluj, Romania; Ho Chi Minh City, Vietnam; San Francisco, United States; and Tangier, Morocco. All of these places have active grassroots arts communities that have extended beyond their own regions to become international places of exchange.

Nestled on the verge of six horizons one finds the cities of Beirut, Lebanon; Cali, Colombia; Cluj-Napoca, Romania; Ho Chi Minh City, Vietnam; San Francisco, USA; and Tangier, Morocco. These places are separated by vast bodies of water, geographically sited on variegated land, and differentiated by unique spatiotemporal realities. And yet if one moves across the contours of this shifting terrain, one eventually finds that at the verge of each horizon is a continuous line: the horizon that circumscribes these locales, orienting them in time and space, also connects them. Occasionally, various cultural and economic forces at play push certain regions into the perceptible foreground, while others occupy less discernible zones. This exhibition explores the correspondences of these six distinct yet interconnected cities, highlighting a few key artists living and working within each of them. The individuals included here have a common interest in and a strong commitment to their own locality, and through their combined collaborative work have formed, or been a part of, unique platforms of various kinds, whether organizations or collectives, that have over time forged connections between their sphere and the larger constellations that constitute the world-horizon.

Through their efforts, the artistic and cultural position of each city has increasingly shifted into focus. Each of these endeavors has produced what Gilles Deleuze and Félix Guattari might refer to as a line of flight, or “a connection, one that takes place between self and others, pushing the subject beyond self-centered individualism also to include nonhumans or the Earth itself.” Like vectors on the horizon, lines of flight deterritorialize (de-center), opening up to new encounters and possibilities, and, ultimately, new forms of knowledge, thus expand­ing fields of understanding for our heterogeneous, rhizomatic, and networked world. Invoking the conceptual playfulness of Deleuze and Guattari, this project aims to “proliferate lines of flight that extend across the social field.”

Now more than ever, artistic enterprises operate as cross-cultural platforms among interconnected constellations that possess the ability to broaden one another’s initiatives through the development of exchange with divergent communities. Over the past several decades it has become increasingly appar­ent that contemporary art is no longer defined by a few primary centers; it is now composed of many centers, small and large, each possessing unique histories, constituencies, and ethnic identities. The emergence of platforms has been a defining characteristic within this landscape — a phenomenon that has over time congealed into a new global paradigm of artistic connectivity and interdependency. In many ways this change has been a result of the emergence of an “informational society” within the context of a global economy restructured by new flows of capital. Internet platforms such as Facebook and Twitter are obvious enhancers of this new world system of simultaneous feedback and participation.

Six Lines of Flight convenes artists who have created and helped to build unique platforms on a grassroots level in six cities around the world, presenting works that index the distinctive locations in which they were made. Through their divergent endeavors, the artists have helped make all of these cities important artistic centers that are now key cross-cultural platforms for other artists living and working in those areas, in essence forging “a new society within the shell of the old.” Often supported by private, outside funding sources, the featured organizations play a defining role in determining the cultural constitution of their own spheres. As George Yúdice notes, “The most innovative actors in setting agendas for political and social policies are grassroots movements and the national and international NGOs that support them. These actors have put a premium on culture, defined in myriad ways, a resource already targeted for exploitation by capital (e.g., in the media, consumerism, and tourism), and a foundation for resistance against the ravages of that very same economic system.”

The deployment of the term platform is now as integrated into the language of contemporary art as it is in the techno-global system, as evidenced by the descriptions of the associations represented here. For example, one of the mission statements for the Cinémathèque de Tanger is to “act as a platform for cross-cultural exchange and dialogue.” Beirut Art Center refers to itself as “a space and platform dedicated to contemporary art in Lebanon.” Futurefarmers also describe their studio as “a platform to support art projects, an artist-in-residency program, and our research interests.” Moreover, the sàn of Sàn Art is Vietnamese for “platform.” In his essay for the Documenta XI cata­logue, Sarat Maharaj calls the platform “a test and try laboratory site”; this reverberates in the description of Lugar a Dudas (A Place to Doubt): “a laboratory to foment knowledge of contemporary art, facilitate development of the creative process, and provoke the community to interact through artistic practices.” Other organizations and collectives included here are the Arab Image Foundation, the Propeller Group, Helena Producciones, and Fabrica de Pensule (the Paintbrush Factory), all of which are similarly defined and conceived.

At the conceptual center of the project lies a series of conversations between artists who have formed some of the organizations and collectives mentioned above, SFMOMA staff, and members of art commu­nities in the San Francisco Bay Area (many of whom were meeting for the first time). These exchanges took place in San Francisco between August 29 and September 1, 2011, and an excerpt from a transcript of one conversation is included in this volume. [We’ll post an excerpt here tomorrow.] This transcript is in many ways the key to the project and serves as an important starting point for unlocking cross-cultural understanding. The roundtable revolves around a discussion of “the periphery,” the notion that variously circum­scribes each city and to a certain extent undergirds this project. The six cities represented here are not considered primary international art centers (for example, New York, Berlin, Los Angeles, Beijing, or London), and none of them hosts a major biennial. Yet they all have active, localized art communities that extend beyond their own regions and become interna­tional places of exchange.

Apsara DiQuinzio is curator of modern and contemporary art and Phyllis C. Wattis MATRIX curator at the Berkeley Art Museum and Pacific Film Archive. Formerly, she was assistant curator of painting and sculpture at the San Francisco Museum of Modern Art, where she organized solo exhibitions with Vincent Fecteau, Mai-Thu Perret, R. H. Quaytman, Felix Schramm, Paul Sietsema, and Katharina Wulff as part of the New Work series. While at SFMOMA she also organized The Air We Breathe: Artists and Poets Reflect on Marriage Equality; Abstract Rhythms: Paul Klee and Devendra Banhart; and the 2010 and 2008 SECA Art Award exhibitions. Her research for this project was supported by a spring 2010 curatorial fellowship from The Andy Warhol Foundation for the Visual Arts.