“We’re so in tune with technology now that we slip into it so well. . . . We’re like cyborgs in the way that we can sort of use a camera as an extension of ourselves.” — Janet Cardiff, in SFMOMA’s Artcast 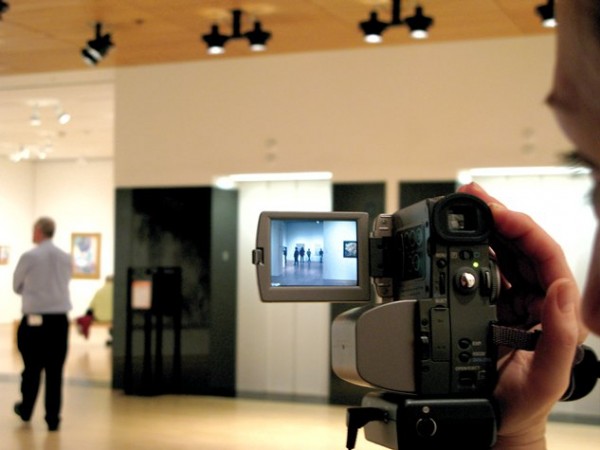 Thanks to the social networks that have built webs through and between our lives, navigating the everyday has become an activity that can be broken down into unique moments, frozen by the lens of a camera or a quick status update, analyzed and repurposed by an infinity of onlookers. Eleven years ago, when Janet Cardiff created The Telephone Call for the SFMOMA exhibition 010101: Art in Technological Times, this was not the case. The feeling of connecting with others across space and time through technology and the Internet was not yet a natural extension of living. Can you remember what it was like? I must admit that I can’t — I was only 14 years old in 2001.

Just for a moment, press rewind and allow yourself to enter an alternate universe in which another’s past becomes your present. For now, your only anchors to reality are a handheld video camera and your own two feet hitting the floor. You are inside SFMOMA. Other museum visitors mill about as you become a visitor inside a stranger’s head. The camera pulls you away from your life and into the stranger’s, articulating her own experience of being present. As you gaze at the world through her eyes, the stranger dares you to look more closely, to see meaning where you hadn’t noticed it before. For 15 minutes you’re isolated in public, immersed in an experience that isn’t exactly yours, but has somehow taken you over. 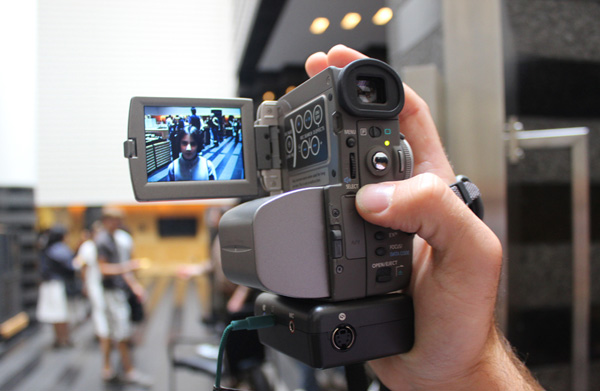 The Telephone Call leads you on an alternative tour of the museum, through stairwells you never knew existed, into a wormhole where the museum of the past and the museum of the present execute the impossible and speak directly with each other. Following in a dreamlike trance, I found myself seeing through solid walls where windows once were, and second-guessing the rhythm of my own two feet moving forward. Comparing the outdated 90s jeans worn by the visitors inside of the camera to the tight jeggings of contemporary visitors was my only proof that time had not collapsed. As I let myself be taken over by Cardiff’s narrative, the tension between past and present created a sharp edge, carving out an area in which nostalgia and progress mixed like oil and vinegar. Although distinctly separate at first, my brain began to mix the two realities together into a deliciously hypnotic blend. 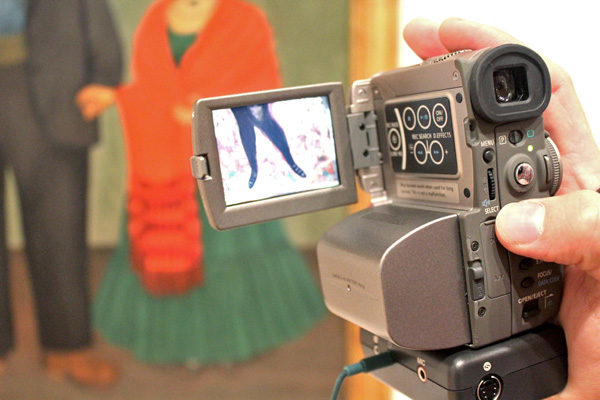 In a nutshell, this is my experience of Cardiff’s Telephone Call, now on view at SFMOMA as part of the exhibition Stage Presence: Theatricality in Art and Media. Since the mid-1980s, Cardiff has blurred the lines between sight, sound, perception, and reality through immersive, site-specific experiences. Her work is able to pin down specific, articulate glimpses into the experiences of others, challenging the viewer to connect with a stranger’s vision to find a common truth. Perhaps an honest and humble great-grandmother to social media, Cardiff’s work explores the meaning of a shared experience, of technology’s relationship to communication, and of the voyeurism of the camera’s lens.

Starting next June SFMOMA will be closed to the public for two and a half years while it undergoes a transformative expansion. Since the project will change the museum’s architecture beyond the mere rearranging of walls and windows, this is the last time that you will ever be able to experience Cardiff’s piece in its original form. As the museum heads toward the next chapter in its life, experiencing The Telephone Call is an eloquent way to reflect on the past, be present in the here and now, and set forth into the future. Don’t wait—the last day to make this experience your own will be October 8.

Our One on One series features artists, poets, and others, responding to single works in SFMOMA’s collection. You can follow it here.

Tags: Janet Cardiff, One on One, The Telephone Call, Willa Koerner, wkoerner