The Visual as a Quickening Sound Vibration: An Interview with Musician Oluyemi Thomas, Part II

Originally from the musically rich Motor City, Detroit, Michigan, musician/composer/multi-instrumentalist Oluyemi Thomas has been a Bay Area resident since 1974. He studied both music and mechanical engineering at Washtenaw College. Thomas creates ordered compositional free music that he acknowledges as part of — but not limited to — what is called jazz. Over a career spanning decades he has performed with Cecil Taylor, Joe McPhee, Henry Grimes, and William Parker, amongst others, and he has made several compelling recordings. This is part II of a three-part interview that focuses primarily on his full-color illuminated musical scores and the things that inspire their creation. Part I of this interview focused on his background as an engineer and how that influenced the language and syntax of his music scores. This part focuses on some of the spiritual inspiration for his compositions and his description of how they are played.

Oluyemi Thomas: We perfect the tale so that we can use the music [laughs], rather than just show how well we can execute on an instrument.

Duane Deterville: That’s the root of the blues aesthetic, right? The telling of the tale … 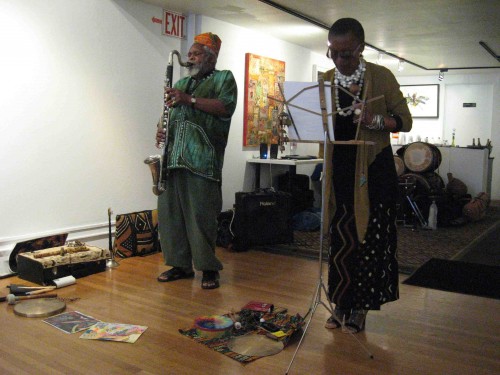 Thomas: It’s the origin of music. It’s the origin of language. Language is always to communicate. Can you talk to my heart? You see, so I’m more interested in talking to the heart. And particularly the part of the heart that understands divinity. The divine part of our heart which is understanding the manifestations of God or the prophets who speak at the highest level, that part of our heart gives us insight into the mystery of the invisible, which is connected to the visible. You know, we’re the visible reality, and the invisible reality connects us together to what’s beyond the invisible. There are a whole new section of notations and tonal vibrations that work outside of what we know. You see, because that informs what we know. It happens there first. The invisible happens first into the visible, you see? Then you’ve got things that happen outside the invisible and it’s just unknown, and it will be always unknown.

Deterville: So then, with the compositions and the way that you draw, is that a way of accessing that invisible area?

Thomas: Yeah, certain alignments. Certain alignments. It’s like they’re prayers. See, I’m praying when I’m workin’ music. That’s the only reason I want to pick up the ax. I like to interface with the heart and connect with the innermost reality. The heart of the listener and their mind and their whole equilibrium. And let’s see what we can exchange. When I looked at that, I said, “Well, you know, life is really a prayer. How life unfolds. Our actions are a prayer. Go help somebody move or cook some food or take care of their children.”

Deterville: What you’re saying really reminds me of a conversation that I had with Archbishop Franzo King of the Saint John Coltrane African Orthodox Church in San Francisco. He was talking about the prayerful nature of the music. Eric Dolphy was a very kindhearted musician who extended himself in personable ways, very much in the manner that you just described.

Thomas: Yeah, he was my great teacher. He still is, too. He’s the one that inspired me to blow this bass clarinet. I said, “Man, what instrument is that?” I said, “That’s it. That’s the ax that I want to blow.” It’s close to my speaking voice, bass and baritone. Dolphy was the exterior instrument, but as far as voices, Melvin Franklin of the Temptations, without a doubt. You know they were in Detroit, and I’m from Detroit.

Deterville: I want to center the discussion back onto the drawings, or what I’ve been calling drawings. You’ve corrected me in calling them compositions.

Deterville: One of the things that I noticed is that when you’re improvising you have it on the floor and you might change the orientation of it. How does that affect the improvisation?

Thomas: OK. Well see, actually I’m blowing the score. See? So it’s not like an improvised piece. It’s mapped out. That is why I was talking about the ledgers. Now I don’t even have to make ledgers. I’ve got different places on the composition that I want to be. That’s why I lay certain notes in there and I lay certain lines in there. See? Even intuition or improvisation is something that a person practices. Because when they’re practicing, they’re practicing to create. There is a familiarity with that. See? So they’re really not improvising other than today they’re doing a continuation of what they’ve been practicing. But I’ve got certain points in the composition that I want to be, and then I can reverse that. Then I build into the composition, I can reinterpret it as I’m interpreting it. I build those things in there because the mind can function that way. I can wear green and think purple. See? Because purple influenced me to wear green. You see what I’m sayin’? But I’m not going to hit you today outwardly, but inwardly. I’m going to work with you … you and I are going to hit it, but I’ve got green … purple made me hit that note and think of another note. See? So this line made me think of circle, but I really drew the line from partially horizontal and partially vertical. See? And then there might be a certain degree radius that I might lay in there. But because I lay it in there I might want to hit an E-flat note off of that. See? I incorporate those hemispheres so that they can work in this movement because the thing is that I lay the score out, but it’s living because I’m living. See, so I’m moving with that and it’s living. See, so actually it’s a composition that I’m structurally working through but it has its creative application where I can go this way or I can back it up. Certain pieces I start off backward on purpose. Because I say, “I know this score, so let’s try this thing backward.”

Deterville: So is that where the reorientation comes from? Is that when you might turn it and start from the other end of it? 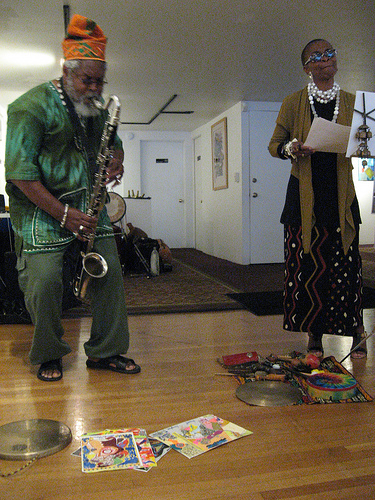 Thomas: I can do that or sometimes I don’t even have to move it. I look at it and say, “I see green,” but I may want orange. Or, I want green. I’m going to play green, and I’m going to use these sequences of notes. Then I say, “Well now I’ve done that, let’s back those notes up, play them backward, and take two of them out. Or place them in there and rotate them. I want to play C … Because certain scores I may put “minus C.” I don’t want to play the note C, I want to play the sound that is before you get to C., So I’ll say “minus C.” You dig? And I know what that means … Minus A. So I’m going to go approximately in the neighborhood of A, but I’m not going to be all the way on A. And then other times I want A. That’s it, I just want A, and I’m going to hit A. Because the thing is living, man. See, so we’ve got limited ways that we’re trained to do music. I was trained that way, too, but now I can hear this thing differently. You know just going into engineering gave me other ways of knowing. We would take sections of an area and we would draw, for example, a wall. We can show what’s behind the wall by drawing a section. That way we can see everything looking at it from a different angle. We can draw it from the top looking down. We have to lay it out like that or else the people can’t build it. So now you draw sections. So, I take these sections of the composition with the music and then give it different views. So that I can see what I’m really doing. See, so I’ve got places in the composition that I want to be. Then I’ve got some places that I don’t plan to be, but it takes me there. In some cases, it’s places that I don’t want to be.

Deterville: So, you can actually enter into these compositions in different ways.

Thomas: That’s where this becomes a scientific practice. Because what’s forward? But if you’ve practiced it, you can say, “OK, now I’m going to do this thing backward,” because I do have a composite framework that I’m working with. Without a framework it’s hard to know what’s forward or backward.

Deterville: So, the scores and compositions are obviously oriented in a certain way.

Deterville: And of course with the compositions that’s how you’re able to reach into that invisible and unknown area as inspiration for your music. Is there a ritual aspect to that?