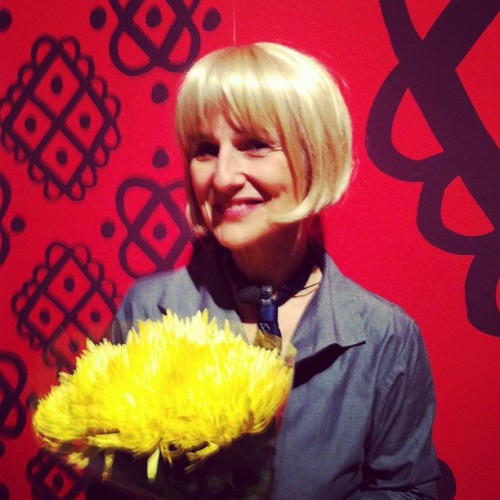 I just had the pleasure of hosting San Francisco–based artist Margaret Tedesco for her Cameo. Nights, and Night. performance, a piece where she reads films the audience cannot see or hear, and the titles remain anonymous. In her narration, she is telling us what is on-screen, but she is also building her own story of the images in front of her (she cannot hear the sound, though she may know the film well).

In the excerpt here from Saturday’s performance she spins a horror story I could not recognize. A carriage falls over, and I thought we were in Roman Polanski’s The Fearless Vampire Killers. Two women share an erotically charged moment in bed, and I swore it was Catherine Deneuve and Susan Sarandon in Tony Scott’s The Hunger. A run to the bell tower is clearly Alfred Hitchcock’s Vertigo.

But in the middle, when I tried to stop name-checking, I lost my bearings completely. Wearing shades of gray against a spotlit wall and gray stage, I was watching a video — and one with great grain. It took me several minutes to remember that, “No, this is live, this is Margaret Tedesco in Stage Presence. This is happening now.”

Her live performances are over, but you can see these excerpts as my reverie did.

Next up: Anne McGuire! More info. Follow the series.