Five questions to SFMOMA artists, staff, or guests. I recently caught up with Ed Osborn, who is at SFMOMA to install his work Night-Sea Music (1998) on the museum’s third-floor landing. The work will be on view until November and if you can’t get to the museum in person, check out this video of the piece in action. Ed is a sound artist living in Providence, R.I. He is also a professor at Brown University and may or may not have been a race car driver. 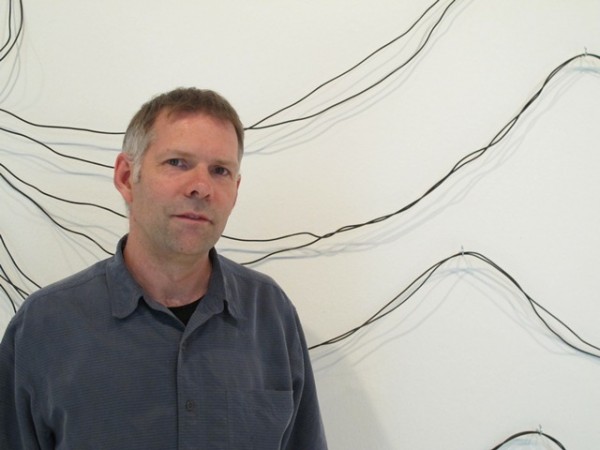 I have a cabinet full of books on the polar regions in my office. People see it and sometimes think that I organize my books by color scheme, since the jackets are all pale blue or white. I listen to a lot of music, and I’ve got a wall full of records and CDs. At the moment I am trying to find all the recordings by Kevin Coyne. He released around 40 albums, and I’ve only got about half of them so far. His voice is amazing, it just rips through the air.

This probably tags me as about a dozen different kinds of nerd, but I’d pick Allan Holdsworth. I’ve listened to his music since I was a teenager, and I’d love to meet him. In interviews, and even onstage, he can be rather awkward and uncomfortable. On occasion I’m that way, too. It would be an awkward afternoon.

If you weren’t an artist, what would your gig be?

I’d be a glaciologist. I’d be quite happy to spend lots of time working around glaciers, examining ice movement and everything related to it. I’ve been to some polar science conferences, and I’ve met some really great people who do glacier studies. I’ve heard it’s a growing field, even if the subject matter seems to be shrinking, so perhaps it’s not too late to change careers.

Whom did you spend at least two hours with today?

My son. We bought some shoes for him and then did a bunch of things we agreed not to tell my wife about, like eating sweets and watching too much YouTube. We saw a terrific video of an astronaut demonstrating yo-yo tricks in zero gravity.

That would have to be a spectrograph. I use one designed for doing sonic analysis to make sure that my sound mixes are well balanced, but more generally they are used for examining light. I wish there was one that could be used for social situations. Then you could see if it was unbalanced before walking into the middle of it. Someone is probably developing an app for that.