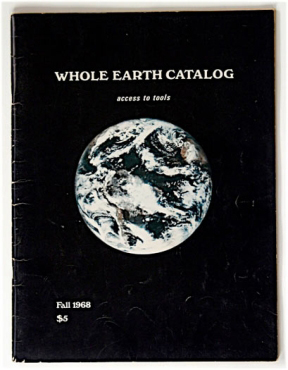 The first issue of the Whole Earth Catalog, Fall 1968

In 1966 Stewart Brand stood under UC Berkeley’s Sather Gate and sold buttons for 25 cents apiece that said, “Why haven’t we seen a photograph of the whole Earth yet?” This provocation was inspired by one of Buckminster Fuller’s epic lectures, in which he insisted that the root of human problems was the common misconception of the Earth as flat and endless. Although the Earth’s shape was known in the abstract, it was not yet understood in any tangible way. Brand remembers sitting on a rooftop, floating on an acid trip, looking at the San Francisco skyline: “Now from my altitude of three stories and one hundred mikes, I could see that [the Earth] was curved, think it, and finally feel it.”

Brand recalls that the first iteration of the buttons said “entire Earth” instead of “whole,” but the phrase didn’t feel quite right. The word “whole” implies the cosmic possibility of infinitude — it is a synonym for “entire” but somehow manages to avoid the notion of clear boundaries around what it might contain. The word also acts as a kind of double entendre, connoting something “holistic” — an apt association for the content that populated the pages of the Whole Earth Catalog, which Brand would launch in 1968 (and which is featured in the exhibition The Utopian Impulse: Buckminster Fuller and the Bay Area).

Brand famously said that “information wants to be free,” and this idea was central to the Whole Earth Catalog. In 1968 the mail-order magazine was among the freest methods of disseminating information that artists and activists could imagine. The idea of true freedom of information transcended the confines of the printed page with the invention of the Internet, for which the Whole Earth Catalog was a wellspring. But in the late sixties, paper disseminated through the mail had a transcendent quality of its own as a perfect medium for artists and idealists. Although the Whole Earth Catalog was not conceived as an art object, the magazine’s hybrid status among the worlds of design, art, community building, farming, language, planning (the list goes on and on) was built in. Brand’s lofty goal to make a magazine that could really be a resource for anything and everything was evidence of his own “utopian impulse.” It also resonates unexpectedly with works on paper and multiples made by conceptual artists, for whom exhaustive information — both its possibility and its absurdity — was a subject of fascination. 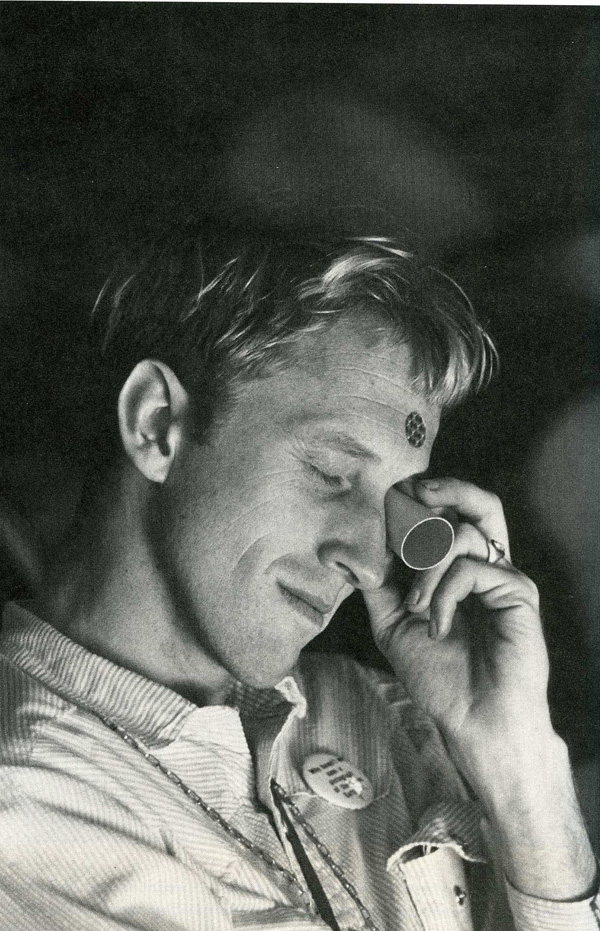 Stewart Brand, October 1966. His button reads, “Why haven’t we seen a photograph of the whole Earth yet?” Photo: Gene Anthony; © wolfgangsvault.com.

After graduating from Stanford University in 1960 Brand traveled around the United States exploring subcultural hubs like Drop City and Native American reservations in the Southwest. Back in the Bay Area, he longed for a way to connect the diverse communities he had encountered, and share the DIY resources that he had learned about. So he set out on a kind of impromptu traveling roadshow that he called Access Mobile, turning his car into a trove of camping equipment, maps, books, and other tools for starting and sustaining an off-the-grid life. As a reference to bring along, he made a mimeographed sheet listing the contents of Access Mobile, which would become one of the pages of the first Whole Earth Catalog. During Access Mobile’s short life, Brand realized that a mail-order resource could travel distances he could never cover in person, reaching many more people in far corners of the country, even the globe. The ubiquity of the magazine — its ability to go anywhere and be everywhere at once — was the perfect embodiment of Brand’s ideals of access and true freedom of information.

Brand’s contemporaries in the art world, meanwhile, also found liberating possibilities in postcards, magazines, photocopied booklets, and pieces of paper sent through the mail, which they saw as alternatives to one-of-a-kind art objects. Conceptual artists like Sol LeWitt, Ed Ruscha, On Kawara, and Stephen Kaltenbach found paper to be a perfect material conduit for art about ideas: it was of little value (anti-market), easily distributed and reproduced, and — unlike a painting or sculpture — it was an object that already circulated in the “real” world. These artists thoroughly complicated the relationships between medium and message, art and design, art objects and ordinary ones. 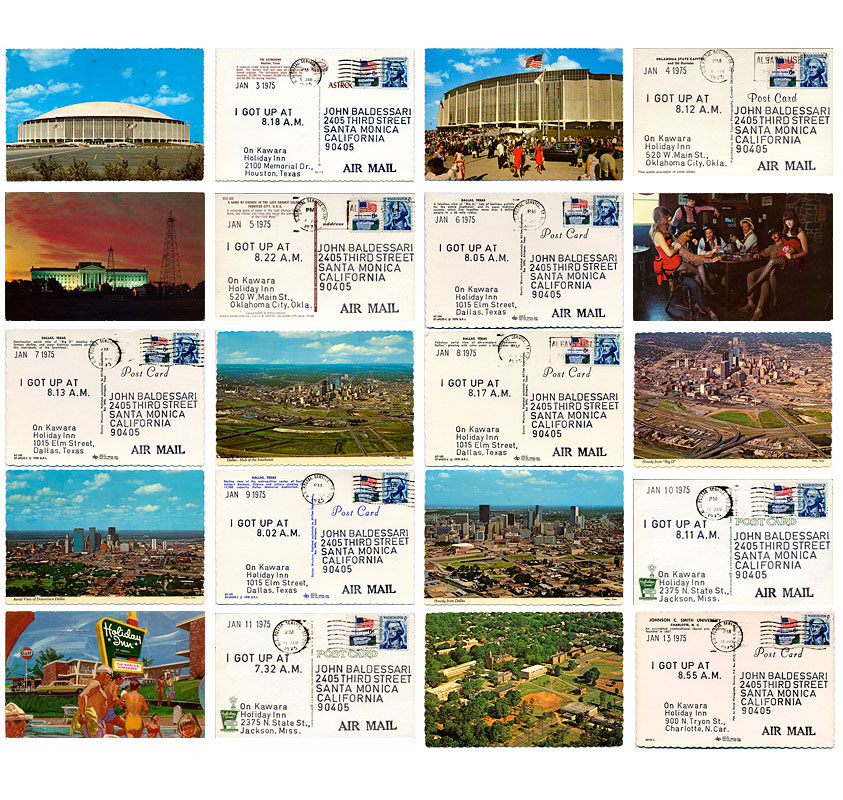 On Kawara, I Got Up, selection of postcards mailed to John Baldessari, 1975 – CLICK FOR LARGER VIEW

To me, the Whole Earth Catalog is both an honest attempt at exhaustively cataloguing all the information that Brand deemed useful, and simultaneously, a poetic nod to the inherent impossibility of this task. The poetics of the Whole Earth Catalog are reminiscent of an artwork like On Kawara’s I Got Up series of postcards, made between 1968 (the same year as the launch of the Whole Earth Catalog) and 1979. Kawara sent postcards to various friends (mostly fellow artists) simply stating what time he had gotten up that day. Like the Whole Earth Catalog’s mission, the conceit of this work is both simple and seemingly impossible in its exhaustive scope (and I Got Up similarly enjoyed the freedom of distribution afforded by the postal service). Kawara’s diaristic feat also recalls Buckminster Fuller’s Dymaxion Chronofile, Fuller’s attempt to chronicle every hour of every day of his life, which he sustained for over 50 years until his death in 1983. 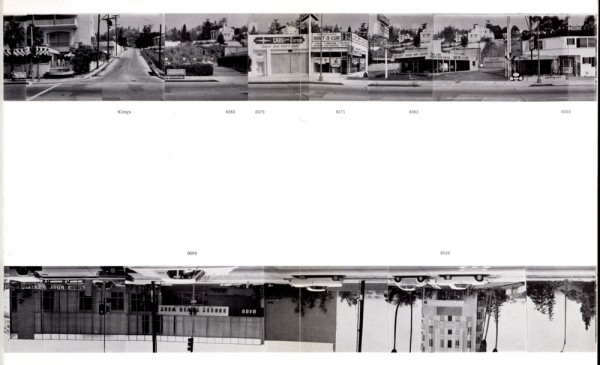 The tension between possibility and impossibility in repetitive, absurd gestures is a hallmark of conceptual artistic practice of the late 1960s and 1970s. Ed Ruscha’s accordion-fold artist book Every Building on the Sunset Strip (1966) uses the unique qualities of the book to document exactly what its title describes. Ruscha grafted together almost 27 feet of paper in order to represent the Sunset Strip in its entirety; the layout mimics the way buildings face one another from opposite sides of the street, while the accordion-fold format allows the full expanse to fit in a 5-x-7-inch book. Like I Got Up and the Whole Earth Catalog, Ruscha’s premise is at once mundanely simple and grandly daunting. For both Ruscha and Brand, it was the serial nature of the book or magazine that made the printed page the optimal vehicle with which to share ideas — particularly ones that unfolded and evolved over time.

While the Whole Earth Catalog was carefully edited to present particular points of view — unlike the straight delivery of unfiltered information in works by Kawara and Ruscha or even the Dymaxion Chronofile — these objects all have in common the view that the printed page could encompass exhaustive information, achieving something boundless even within its clearly bounded pages.

Jessica Brier is a curatorial assistant in the Photography Department at SFMOMA. She is also a contributing writer for Art Practical.

The Utopian Impulse: Buckminster Fuller and the Bay Area is open through July 29.