Fernando Fuentes is a performance artist, feminist, and independent researcher. 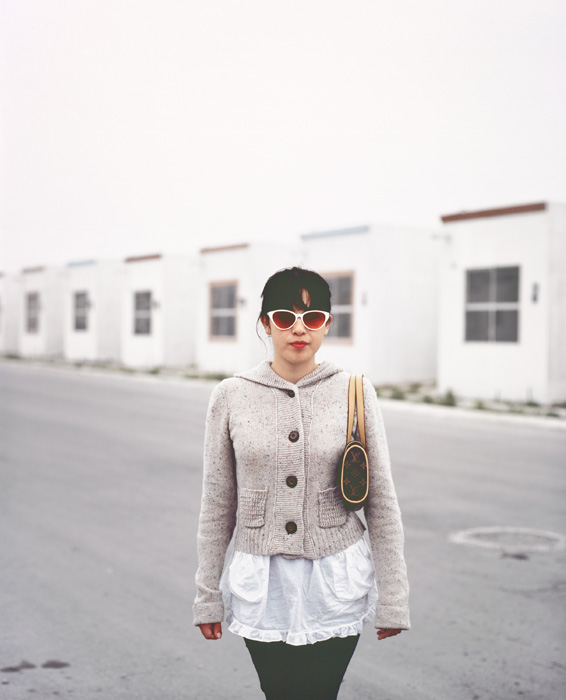 Alejandro Cartagena, Girl Coming Home to Suburb in Juarez from a Night Out in the City, from the series Suburbia Mexicana, 2009; inkjet print; Collection SFMOMA, gift of the artist and Circuit Gallery; © Alejandro Cartagena

When I began writing these lines, I recalled a series of essays written by Martha Rosler, for different occasions and across many years, but which all turned around the production, reception, and forms of disseminating images fixed or moving. Not only was she thinking about the image but also about the meaning of being an image-maker: the responsibilities that this brings with it, the risks and the rewards, and to avoid the language of business, we might say, the happiness that an artist might find in their work (if we understand that happiness also comprises an essential part of the cultural industries that for many years have profited from desire and emotion). But there is something in the beginning of the introduction to Decoys and Disruptions: Selected Writings, 1975–2001 that I think is what made me return to my photocopied version of this book: its rather basic idea, as Rosler herself points out, that to engage in a process of collective transformation, communication is essential, and the image, which has the potential to open a critical approximation of reality, plays an important role. With this set of images that form the exhibition that I am writing these notes for, I believe that this critical possibility of the image and its transformative potential is far from being realized. However, with the images of the photographic project Suburbia Mexicana (Mexican Suburb) this insufficiency is more evident and in what follows I will try to explain why that is.

It was suggested that I write about the present in Mexico starting from some of the images in the exhibition Photography in Mexico. As a feminist, I have to take advantage of this space to speak, write, and express my inconformity with the patriarchal system. The photos from the series Suburbia Mexicana by Alejandro Cartagena are inscribed from my perspective, and from any that might be even a little critical, in the symbolic order of the patriarchal-capitalist system. Perhaps the photographer wanted to uncover a less aggressive side of a city that is known only for its conflicts or for being the most violent city on the planet in 2011, where the murder rate exceeds that of places like Baghdad. Alejandro wanted, as he himself says in an interview, to simply meet the people who live in the housing units on the edge of the city: the Mexican suburbs. To meet the subjects who arrive at the Mexico–U.S. border to live on the edge of another, second border: outside the American dream and at the edge of the Mexican reality. From the images generated by the photographer, we have the impression of a peachy world floating on top of the dark reality of a country at war, in a state of full crisis, of an economic system that applies the instruments of terror and death — as feminists say, where the political, legal, economic, and cultural systems depend on patriarchy.

There are many ways of viewing images of young women returning from a night out, but I would follow the approach developed more than a decade ago by Ursula Biemann in her video Performing the Border. From here, and from the precise denouncement contained in Marcela Lagarde’s definition of the term feminicidio, we can see in the violence toward women in the border city of Ciudad Juárez in Chihuahua a fracture in the rule of law that leads to impunity and converts the rule of law into a crime of the state (Lagarde).

Approaching the way in which borders are constructed performatively as spaces of conflict by institutions, governments, corporations, inhabitants, and the persons who cross them, and not just by being borders as such, we begin to understand the murders of women in Ciudad Juárez and all the political, economic, social, and cultural events that give shape to feminicidio. Thirteen years ago Performing the Border was a watershed event for artistic projects taking the Mexico–U.S. border as their theme. There are two proposals that Biemann advances in this video and that collect a good part of the thinking that has been developed regarding feminicido. Both proposals are very important for understanding why an image of a young woman returning from a night out should be seen and understood, in order to respect an entire generation of women who suffered the “adjustments” of capitalism on their own bodies, from the historical complexity of a country in which women, just as children and young people, are murdered with complete impunity.

The first proposal that I would rescue is the way in which Ursula Biemann establishes a relationship between a mode of production and the types of subjects it produces. She proposes that border culture, in a city of maquiladoras, can be understood not as a static place but as “the robotic, repetitive process of assembly work and the intimate implication of the body with these technological functions and the association of this process with the gendered and racialized body. [A woman’s] body is fragmented, dehumanized, and turned into a disposable, exchangeable, marketable component” (Biemann, 1999). The second proposal emerges from the way that Ciudad Juárez in the 1980s became a laboratory for flexible labor. Women who came to the maquiladoras had to cover interminable shifts, working without contract and without any type of benefits, without the possibility of organizing with other workers to defend their minimal labor rights. The Mexico–U.S. border appears not only as a space for a new form of the organization of labor in which women became the new labor force, but also it becomes the space where the relations between men and women are marked by this productive function that the women have begun to exercise. When capital arrived from Canada and the United States, the heads of the maquiladora demonstrated a strong preference for young and single women who then obtain a certain level of economic independence. Young women from 13 to 16 years old began to enter the labor market, and when a young woman makes her own money, as Performing the Border points out, it becomes more difficult to prohibit her from going out and enjoying bars, dance clubs, and the nightlife of a city. Ursula Biemann notes that at the end of the 1990s the border was “a highly gendered region. It can only parse relations along the lines of gender difference or spelled out in sexual terms. Relationship patterns are being remapped quite drastically — there is a certain reversal of income power that empowers women that enables their overt expression of their desire and affords the satisfaction of these desires. In the dance halls, the shift of buying power to young women is very obvious. Entertainment is mainly catering to female customers with male strip teases where women cheer and rate their sex appeal. The lyrics of the music are often explicitly about satisfying female sexual desires” (Biemann, 1999). Women — by exiting from the social order established by patriarchy, by generating, demonstrating, carrying out their own desires — bring us back to the feminicidios. As Mariana Berlanga points out: “feminicidios are nothing more than the culminating moment, the extreme point of that defense to the death of masculine power. From my point of view, murdering women has the meaning of ordering, from patriarchal vision, structures that the dynamics of that very system have rendered flexible and which it seeks to reformulate” (Berlanga, 2008: 12 y 13).

When one takes a photograph in 2009 to show a woman returning from a night out in a city when the principle victims of feminicidio are precisely women of this age and generally of this social class, exactly in the year in which the attack on the female gender in Ciudad Juárez (as well as in Chihuahua, Guerrero, Michoacán) experienced a cruel return, one cannot take up a neutral position or pretend innocence of the situation of feminicidio in which every one of us Mexican men is implicated. From which I can’t escape, even in writing these lines, even in my belief of the necessity of a complete rejection of patriarchal order, nor in my desire to be a feminist. To escape from it, I have to follow and continue alongside the feminist compañeras and compañeros who are creating worlds far from the logics of competition, abuse, subjection, violence, and accumulation, or in the words of Rita Segato, “… far from the hierarchical and patriarchal structure of power.”

Fernando Fuentes is a performance artist, feminist, and independent researcher. He works from and in various aesthetic and political practices in collaboration with anticapitalist and antipatriarchy groups, organizations, and individuals. He is the cofounder of the collective La Lleca and coeditor with Josephine Alcazar of the book Arte Acción y Performance en América Latina (2004).