Lorena Méndez Barrios is a feminist activist and visual artist. 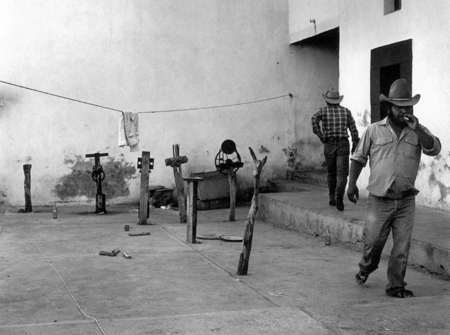 I write these lines from the place where I have worked for nine years in a prison in Mexico City. I am a feminist, and my political work begins from the affective. I have been able to sit next to prisoners, both male and female, in order to think about the economic conditions of our country and to reflect on the cultural processes that make possible the reproduction of social exclusion and the ways in which we rebel against the overdeterminations of the system. Next to the women and men who are found here behind bars, we have been able to sit together and imagine building another world that would cause us less harm.

In Mexico City there are seven prisons for men, and two for women; three prisons for adolescent men, and one for adolescent women. The prisons are overcrowded, living conditions are very difficult, and survival is possible only through violent acts; you must take advantage of those below you and be taken advantage of by those above you: this is the law of the prison.

The patio that Mariana shows us is an almost empty one, it seems like a place in the provinces of the Mexican Republic; there are only two prisoners walking, nothing like the patios in the Reclusorio Norte (Northern Penitentiary) located in Mexico City, which is known commonly as the RENO. When I entered the RENO for the first time, it was daytime, and I was stunned by the number of prisoners in each one of the patios. I remember a multitude of worn-out faces with distant stares. They looked like shadows from a terrible dream. In one patio all the men were lying on the ground, in the sun, some of them asleep, others with open eyes. They had few pieces of clothing, dirty and long-used.

In the passages of the RENO, like in the photo Patio de cárcel (Prison Patio), some come and others leave, some with difficulty because they can barely walk. Many are missing teeth, and others are missing an arm, a leg, or an eye. The majority of them are men with dark skin and indigenous features.

The prison is a space that is of great interest when it is seen by those who live far from the reality of incarceration, poverty, and abandonment. The grey tones of the prison’s interior, the bodies dressed in no more than two colors, the routine of coming and going like rats in a cage, the distribution of cells with the few objects they are permitted to have, and prisoners’ resourcefulness are always attractive material for those who have cameras to produce images of them. The persons who are incarcerated don’t see their surroundings as attractive, and they don’t seen themselves through an aesthetic sensibility; on the contrary, frequently they are embarrassed by how they appear in these conditions. Nevertheless, for some artists, both male and female, collecting images of people in disgraced or difficult conditions is a form of work that we can say has a great deal to do with a kind of voyeurism. The fact of approaching a prisoner to start a conversation doesn’t mean you have the right to begin taking photos.

In the market for contemporary art during the last few years, there has been an interest in exploiting via photography the images of criminals, “delinquents,” the homeless, sex workers, narco-traffickers, and hired killers. The art system has shifted how it deals with marginal groups and its means of naming them, due to its newfound interest in political art — as though from within university discourses, instead of from a reflection on the politics of everyday life, or from experience and struggle. The thematic of the prison is treated via “critical” discourse generated by a few in-the-know professionals, who, in order to renew their credentials, have decided to focus on art from a place which shouldn’t be seen from a distance. Because the situation of incarceration, the violence, and the painful histories lived by those who are victims of a capitalist economy cannot be understood from the comfort of an intellectual universe, nor from the position of a spectator inside a museum. And if our aim is not to do an injustice to a context where the levels of inhumanity are sufficient to demand we not remain as disinterested observers, then it appears to me perverse to continue thinking about the thematic of the prison from the space of discourse and not from practice itself.

Aestheticizing the reality of the prison, resignifying the signs found there which are the product of a world of destruction, implies in some way emptying out its meaning, covering up the violence that is generated there and the humiliating conditions that are lived there day in, day out.

Lorena Méndez Barrios is a feminist activist, visual artist, and research professor at the Universidad Autónoma de la Ciudad de México, and a cofounder of the collective La Lleca. She studied visual arts at La Academia Nacional de San Carlos UNAM and in the program for Cultura Visual in la Universidad de Barcelona and currently works in prisons for adolescents and men in Mexico City. She is working on doctoral studies in Enseñanza Aprendizaje de Artes Visuales and in Arte y Representación, in la Facultad de Bellas Artes de la Universidad de Barcelona.