Critical photography, or the triumph of the hegemonic gaze? 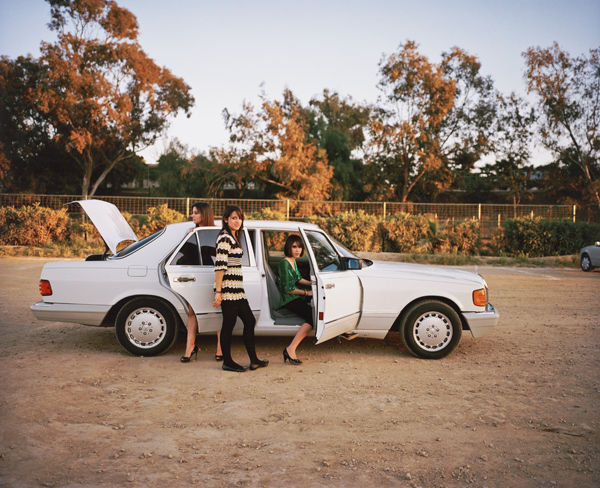 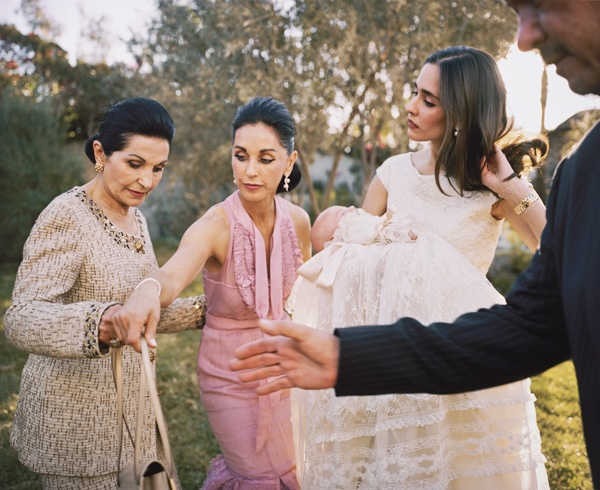 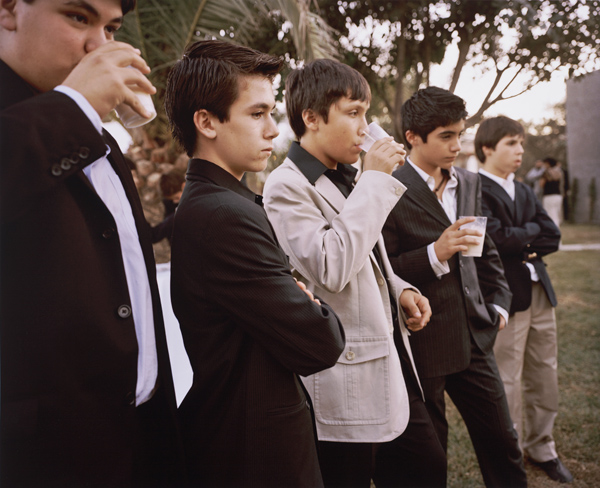 The most talked about debate in Mexico in recent decades concerning the social function of photography occurred around Daniela Rossell’s series Ricas y famosas (Rich and famous). “The persons photographed — the majority young, blonde women — are not identified in the book but … the majority belong to the Rovirosa-Rossell clans, whose fortunes were made during the administrations of [the ex-presidents] Echeverría and López Portillo” (Proceso, n. 1349, Sept. 8, 2002, p. 12).

The series “Ricas y famosas” was taken as a demonstration of the corruption of the families of highly placed functionaries and businessmen in the Partido Revolucionario Institucional (PRI) and the Partido Acción Nacional (PAN) in Mexico City and Monterrey.

The term kitsch was the adjective most frequently repeated in the press in order to name the opulent aesthetic of the bodies and their surroundings seen in the portraits: the “granddaughters of the Revolution” and, as well, literally, the son of Carlos Salinas de Gortari, the Mexican president who arrived at the presidency via a rather stunning fraud in 1988 and who signed the North American Free Trade Agreement into law.

Rossell forms a part of the families portrayed and in more than one interview she denied any condemnation or sense of irony with respect to the “bad taste,” corruption, and vanity implicit in her photographs. She also has defended the portraits: “I can tell you that there is also a lot of identification and a desire to say to these women that they should take a stronger stance, be more open, more audacious, that they should have no fear of showing their sensuality….. In no way am I making fun of them” (Proceso, p. 19).

“Ricas y famosas” was a paradoxical moment in the history of photography in Mexico.

On the one hand, it reiterated the function of photography as a condemnation of the inequality of Mexico’s class structure; on the other, it retreated from a photography of critique. It announced a clear decline in the national-modern photographic project.

“Ricas y famosas” left the camera by itself and constructed a photographic subject somewhere between cynical and naive; a Mexican Warholization of the artist as a cool flake and frivolously witty, who pleads the fifth as to the social implications of the images they construct; hiding themselves behind a fearful discourse of reprisals and, at the same time, erasing themselves from the social context that makes possible a political reading of the image and taking refuge in personal reasons for making photographs.

Around 2006 and 2007, when the project of Rossell was still being discussed, information began to circulate about a series of photographs by Yvonne Venegas showing the upper classes of Tijuana and, in particular, the family of Jorge Hank Rhon.

Venegas first hit the scene as part of the Tijuana art boom, to which were dedicated several exhibitions in and outside Mexico and which became a counterweight to the hegemony of Mexico City in contemporary Mexican art. To this same generation belong Marcos Erre Ramírez (probably the most celebrated of this community), Tania Candiani, Julio Orozco, Daniel Ruanova, Jaime Ruiz Otis, and projects like Nortec and borderized (literary) writing. Venegas, moreover, is the sister of a well-known Mexican singer (Julieta Venegas) and the daughter of a personal photographer of Tijuana, locally famous for creating portraits of the “most beautiful brides of the city.”

In the beginning it was common to hear said that the series of Venegas continued the investigation of Rossell. Slowly, Rossell’s name ceased to be invoked before the work of Venegas as her work became connected to a more important name—when Venegas decided to explore the world of María Elvia de Hank, current legislative candidate and wife of Jorge Hank Rhon, the most powerful and controversial businessman and politician along the Mexican border.

Hank Rhon is the son of one of the Mexican politicians who most symbolized the corruption of the PRI: Carlos Hank González, who is remembered for his saying “A ‘poor’ politician is, indeed, a poor politician,” an aphoristic apology for illicit enrichment.

In the 1980s, Hank arrived in Tijuana to take control of the Hipódromo de Agua Caliente (a horseracing track) and since then has been linked to organized crime. In 1988, a columnist of the weekly journal Zeta—the media outlet which made possible, for the first time in Mexican history, the PRI’s loss of a governor’s race—was assassinated. The (now imprisoned) perpetrator of the crime was the chief of security of Hank Rhon, who the columnist Héctor “The Cat” Félix had sharply criticized. The periodical, to this day, names Hank Rhon as the intellectual mastermind of Héctor’s death.

The power of Hank, nevertheless, was not limited to impunity. His name is synonymous with excess: from being the owner of a private zoo with more than 20,000 animals to his daily, vigorously prepared beverage of tequila and animal penile matter, from his celebrated declaration that “women are his favorite animal” to his boasting on television of his fortune of more than a billion dollars.

Despite the negative public reaction which began at the end of the 90s, the image of Hank—the man who hand and face appear, respectively, in the center and upper right-hand corner of one of the photos—became a seductive urban legend of his eccentricity and his personal “powers.”

Thus in 2004, Hank is elected mayor of Tijuana. This triumph, without a doubt, marked the slow return of the PRI to power along the Mexican border that, in good measure, had twisted out of its grasp due to the popular indignation at the murder attributed to Hank a decade and half earlier.

In 2009, the United States government cancelled Hank’s visa on suspicion of criminal connections and in 2011 the Mexican army entered his mansion, where dozens of high-caliber weapons and thousands of rounds of munition were found, and with which he was photographed (although these photos have never been published). After a short stint in jail, Hank, once again, was free. Currently he is one of the most powerful and feared men in Mexico.

The reception of Venegas’ photographs, then, has more than one context. On one hand, they portray the habitats of moneyed Mexican families, their ceremonies, and private life, with a pronounced emphasis on the construction of lineage, position, and class destiny.

The photographs, for example, in which children appear produce the sensation of these upper classes as living in a straight-jacket of conduct, a ruinous imposition of a rigid lifestyle (a conclusion influenced by the common Mexican perception of the “rich” as repressed or unhappy beings). Social class as a trans-generational inheritance of the body’s training: the rigorous induction into gender and an upper-class aesthetic.

But as soon as we see the history and lives of the Hank family in these photographic worlds, our readings take a more serious turn. As in the case of “Ricas y famosas” the images of Venegas become a documentation of the luxurious isolation in which the Mexican political class lives and, obviously, a denouncement of their corruption and frivolity.

Once again, as in the case of Rossell, this border photography doesn’t contain in its verbal discourse any sign that it intends this denouncement. In the book María Elvia de Hank—published in Mexico by Editorial RM in 2010—the first page includes a letter from Venegas to the wife of Hank describing her project and intentions. In this letter-prologue there is no sign of irony or critique. Venegas appears to use an aesthetic of (impossible) neutrality with respect to the meaning or socio-political value of the image.

The risk of the photography of Rossell and Venegas is the displacement of the critical character of photography and the diminishing of the possibilities of a critical, and above all political, reading of the image, which, in the best case scenario, allows the viewer to rescue its denouncement. Or, in the worst, to dissolve it into a flood of information and the victory of the aesthetic (and anonymous) features of the images.

This retreat of Mexican photography occurs because these photographic projects were possible thanks to a certain naivety on the part of these hegemonic families, who perhaps authorized the projects believing that they would prove beneficial to, or at least not damage, their image.

The combination of the retreat from an explicit critical position and the naive (or cynical) gaze of María Elvia and the families of “Ricas y famosas” makes possible that this de-politicized and hegemonic gaze is imposed on us; that is, before the over-aestheticization of the image we remain in a state of uncertainty concerning the critical character of these works and artists, since there is nothing suggestive in the titles of the photographs, interviews, texts, or publications. There is no manifesto.

If we leave to one side, for a moment, the political disengagement of the photos with their sinister implications, and we concentrate on the general form of representation, the images appear as “personal” stages and, then, the gaze that those being photographed have concerning themselves becomes our gaze before the photos. The photos did not take (and interpret) just the gaze of Venegas but that of María Elvia as well.

(It is noteworthy that on the cover and title page of the book, the typography and position of the words “María Elvia de Hank” are positioned next to “Yvonne Venegas” in such a way as to suggest that her name is not the title, but rather that she is the co-author).

In the photography, however, there are gestures or looks that don’t conform, childish presences, body language, markers of class, inescapable geopolitical contexts that invite us to take up again a political reading of Mexican photography, today swallowed up in the domination of the spectacular and condescending gaze of the hegemonic class that wants to assuage our suspicions of these images’ perturbing character and, in their place, to persuade us that there nothing worrisome here and that they are just one more family.

Such signs of social decomposition or condemned excess are the residues of the political discourse of prior stages of modern Mexican art and photography. They are the grotesque daring (of Rossell) or subtle audacity (of Venegas) that make up for the negation of critical discourse in their own photographs.

In this sense, Rossell and Venegas in their retreat from critique and by denying, contradicting, or blurring photography’s revolutionary discourse, are evidence of the advance of the a-critical gaze in Mexico in the very heart of a once revolutionary photographic tradition. Or perhaps they are a stimulating bridge to a world where the artist decides to stop being the center of critical discourse in order to allow it to be revived (and defragmented) by the spectator’s gaze.

Heriberto Yépez defines himself as a post-Mexican writer living in Tijuana. His work ranges from poetry and fiction to experimental writing and translation. His latest books are Wars. Threesomes. Drafts. & Mothers (Factory School, 2007), written in English, his analysis of Charles Olson’s ideas and experience of Mexico in El Imperio de la neomemoria (Almadia, 2007) which deals with Olson’s early poetics and it’s imperialistic notions of “Space” and cybermnemics (control of memories) and the clash of diverse cultural logics; his poetry collection El órgano de la risa (Aldus, 2008) and his novel Al otro lado (Planeta, 2008).