Dolores Dorantes is a poet. 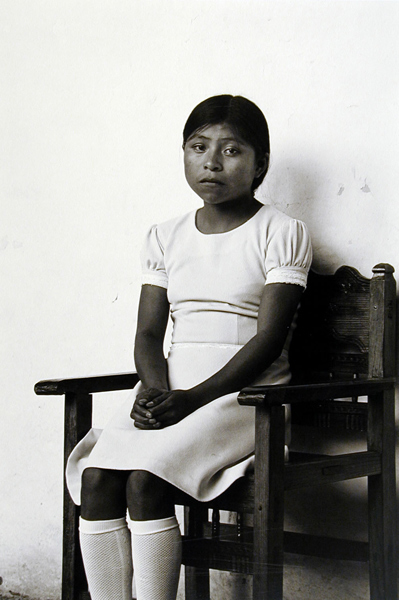 I ought to lose my fear of this, as well: to see. I see. A tunnel of light, and I see everything open and germinating in every sense of the word. Every. A terrifying organism. I remember a dream in the middle of the fever. What is literally being in the world, in the whole world. That the world is inside oneself and to see that one is an infinite extension and structure. To see. How things happen and one is as important as a key or a code so that everything takes on form. To see that I see who you are: that fountain of everything tranquil as if I wasn’t a body. I am not a body, and I have far-away places where things happen without stopping. The days where we walked covering our faces, the days where we arrived, running, to the zócalo. In the downtown, the multitude enters to defend itself. And I, or who I was, up on the stand for the photographers, snapping with a Minolta. Things of the desert. Everything is here. The first photo with our hands raised. The road walked by the men who tell me of their homes, the caciques, and the murders: everything is here. And I, who believed that I lived in a city without knowing before hell. And I, who said that everything was a farce and here I am: seeing the farce, fearing the farce, living the farce with the hope that in some moment, this which is happening stops startling. And I see it. It is right here and I’m tired of trying to approach it. You were nine years old when I was celebrating the new year in shiny Mexico City. When the year began with explosive devices. There was no way to get to the jungle. Now I hear footsteps in the vegetation from a car where religiously I am afraid and I write you. There was no way to get to the jungle. I saw you on television: eighteen years old and still it scares me to see that there is no line, that there is no other side, that I am here, in the desert and in the jungle. Many deaths later and still it scares me to see how blood descends from the mountain. And I am terrified of lies.

Dolores Dorantes’s books include Querida fábrica (Práctica Mortal, CONACULTA, forthcoming 2012), Estilo (Mano Santa Editores, 2011), sexoPUROsexoVELOZ (Lapzus and Oráculo, 2004), Lola (cartas cortas) (Fondo Editorial Tierra Adentro, CONACULTA, 2002), Para Bernardo: un eco (MUB editoraz, 2000), and Poemas para niños (Ediciones El Tucán de Virginia, 1999). Her op-ed pieces, criticism, and investigative texts have been published in numerous Mexican newspapers, including Diario de Juárez, El Norte, and DíaSiete. Jen Hofer’s translations of her poems into English have been published in numerous literary journals, and in the anthology Sin puertas visibles (ed. and trans. Jen Hofer, University of Pittsburgh Press and Ediciones Sin Nombre, 2003). sexoPUROsexoVELOZ and Septiembre, a bilingual edition of books two and three of Dolores Dorantes by Dolores Dorantes was co-published in early 2008 by Counterpath Press and Kenning Editions; a new edition with books one through four from the series will be published in 2012 by Kenning Editions. She lived in Ciudad Juárez for 25 years and currently lives in Los Angeles, where she teaches workshops in autobiographical writing and documents the lives of exiles through Proyecto Sur Los Ángeles.