In celebration of the 75th anniversary of the Golden Gate Bridge, Open Space is hosting a suite of posts in tribute. As part of the series, we asked Aimee Shapiro, Artists-in-Education program manager at Southern Exposure (SoEx), to work with two artists from SoEx’s Artists-in-Education program. Both youth artists are members of SoEx’s Youth Advisory Board, and will be participants in this year’s Mission Voices Summer program. We’re very pleased to welcome Christian Fernandez. 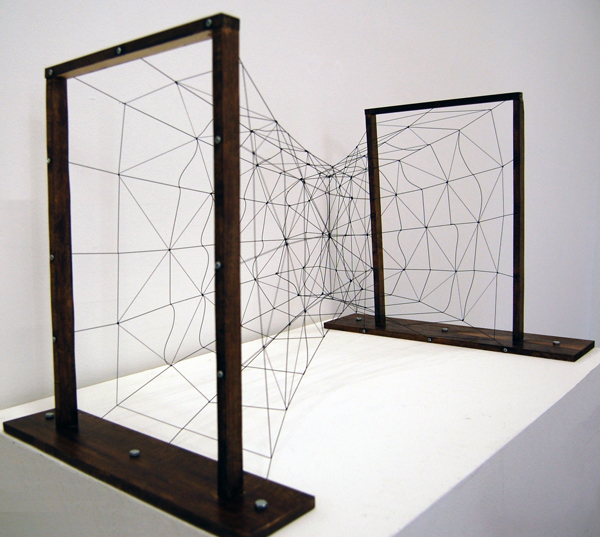 The Web Bridge was inspired by a mixture of ideas. The piece was originally based on the Golden Gate Bridge and the idea that the bridge not only moved people from one side to another, but their thoughts and feelings, as well. The bridge was meant to be a mass of neurons arranged in a web shape to symbolize how ideas could be transferred by something that was engineered, yet still organic. This idea still remains in the piece, but as it was being made it evolved into something more complex. It was not simply the moving of ideas, it was the movement of people’s lives. The threads of the web became the threads of life, chaotically intertwined but still organized. It was engineered, but still organic. This parallels the life of the bridge itself because in the 75 years of its existence, the Golden Gate Bridge feels as though it’s become less of an engineered structure, and more of an organic one. It has grown into an icon that is not only associated with San Francisco, but California in general. It is constructed of the life threads of everyone who has been affected by it. This piece reflects that web that we have woven. The Web Bridge and the Golden Gate Bridge that inspired it both vibrate to the movement of our lives.

Christian Fernandez started making art his junior year of high school, but he’s been interested in art and the creative process since he was 13 years old. He began his practice in the City Studio program and was with them for two semesters, then joined Southern Exposure’s Mission Voices Summer program. From there he dove into art-making by working on projects with Southern Exposure’s Youth Advisory Board for three more semesters, and another summer in Mission Voices. With SoEx he has taken part in many projects, including helping curate the show Gone, portraying the Life Knight in Allison Smith’s The Cries of San Francisco, and creating the “Seer of Sights Unseen” persona for the Hidden In Sight exhibition. He’s now in his fourth semester at Southern Exposure.

Southern Exposure (SoEx) is an artist-centered nonprofit organization that is committed to supporting visual artists. Through its extensive and innovative programming, SoEx strives to experiment, collaborate, and further educate while providing an extraordinary resource center and forum for Bay Area and national artists in its Mission district space and offsite, in the public realm. An active presence in the Bay Area since 1974, SoEx is continually evolving in response to the needs of artists and the community while engaging the public in artists’ work. Central to its mission is to remain the most accessible space for visual artists to produce and present new work, learn, and connect. SoEx provides visual artists with the tools and resources they need to experiment in an open and supportive environment. It also works to advocate to new, diverse audiences and build an ever-growing community of enthusiasts and supporters of the visual arts.