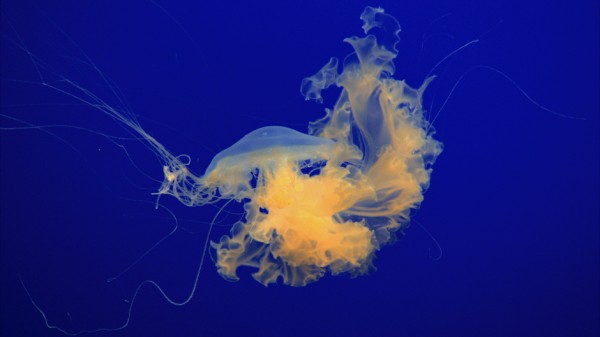 During my first three visits to the California Academy of Sciences aquarium, the giant octopus failed to make an appearance. Three times I searched its tank for some sign of life — the tip of a curling tentacle that might give away its hiding place — and three times I left disappointed. I could only imagine it buried in the shadows of a rocky lair, a large eye watching me from some dark corner.

My fourth visit was on a Thursday evening. My friend Rose and I, cocktails in hand, headed for the giant octopus tank and settled down, prepared to wait it out for a rare sighting. Before long, a couple of tapered pink tentacles emerged at the left corner. Slowly, elegantly, tentacle by undulating tentacle, the octopus coyly slid into full view along the glass, its oval head drifting buoyantly behind. She settled into a central position on the glass window, her skirt of tentacles splayed beneath so she could raise her head and eye her now-awestruck crowd of visitors.

The giant octopus remained there for a while, affording her audience time for close inspection. We watched, rapt, as we realized something in her appearance was changing: a process of metamorphosis was afoot. The octopus began to assume a deeper, darker shade of red, and white spots surfaced on her membraney skin. The texture of her skin grew rough, knobbly; two small horns emerged above her eyes. A virtuoso display of strength and camouflage, designed to ward off unwanted competitors.

Then, as though relaxing her muscles, she slipped into her original form — her skin smoother, finer; her color a uniform pink. Taking flight, she propelled herself off the glass, tentacles streamlining behind, exhibiting her full length and letting her formidable body billow out around her — a giant tentacled star, the crescendo of a firework display.  It might have been the gin in my system, but this incredible performance felt personal. The octopus surely knew we were watching, could sense our captivation, and knew how to deliver this studied display. This is all projection, of course. Another visitor will have seen something quite different, and God only knows what the octopus saw.

Aurélien Froment’s work Pulmo Marina (2010), in SFMOMA’s Descriptive Acts, plays off the idea that looking is an inherently subjective act. Can we look at an object — animate or inanimate — objectively, without making associative connections? Froment’s video assumes the form of a nature documentary, taking a Pulmo Marina jellyfish as its subject. Two components we immediately register as true to this form: footage of the subject and a voiceover telling us things about the subject. But there are other elements that disrupt our expectations. This is not the benign, impartial voice of a David Attenborough. This narrator is knowing, unstable, not to be trusted.

On the one hand, he recognizes our limited knowledge of the species: Jellyfish just don’t fit the categories … All we know about them is what we can observe in a laboratory aquarium. The jellyfish is not seen in its natural habitat but in a tank at the Monterey Bay Aquarium, an environment whose artifice he exposes: Two currents swirl from bottom to top, leaving a neutral zone where the drifter is held in a stationery position. But the narration slips between objective and subjective observations, an implicit statement of the range of knowledge and experience that plays into our perceptions. He attempts to indicate exactitude by establishing precise details of the tank: Some tanks are round, but this tank is elliptical … The transparent sheet of acrylic we’re looking at is two inches thick. But interjections of very personal associations indicate otherwise: The tank looks infinite, like the landscape behind the windows of the dioramas in the American Museum of Natural History in New York.

Something about the intense focus of the camera lens on the creature’s hypnotizing, illuminated form, combined with the ever-so-slightly-insidious-sounding voice, unnerves a little. By turn, viewers are encouraged to see the jellyfish as Medusa, with serpent-like tentacles, and as the jellyfish of other ancient mythology. The narrator’s voice is sometimes academic, sometimes wily in a tone appropriate to the predatory role assigned to the animal — jellyfish, we are told, are intrepid carnivores. What’s more, he seems to be looking not only at the jellyfish, but also at its audience, at one moment saying with a half-laugh: I can see that grin on your face. We are reminded that being looked at can be unsettling.

The voice may be describing a hunter, but its pernicious undertones hint at a kind of violence enacted on the jellyfish, too — through its capture, incarceration, and most importantly, through its becoming the subject of our gaze, our observations and our projections.