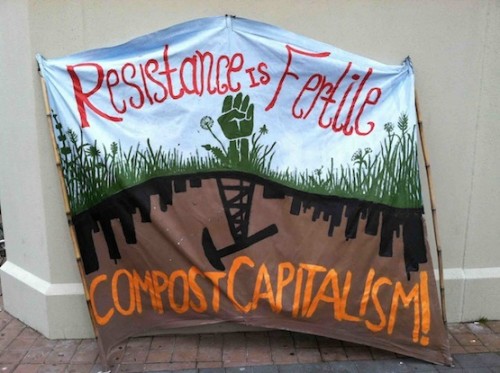 The horizontal governance and DIY aesthetic politics of Occupy foster a visual culture of creative diversity — letting “a thousand flowers bloom.” Occuprint, a website showcasing donated graphic designs of protest from all over the world, makes this case visually. As part of the creative commons, the graphics can be freely downloaded for noncommercial use. Occuprint evolved out of a special issue of the Occupied Wall Street Journal devoted to graphic arts. In addition to replicating donated graphics, Occuprint posts best practices for the production of agitprop and guidelines for setting up a placard production lab “at your own occupation.”

A “lab” can be anything from a tarp-canopied studio for silkscreen printing to an area of the sidewalk where cardboard boxes are broken down, dabbed with poster paint, and transformed into colorful agitprop. 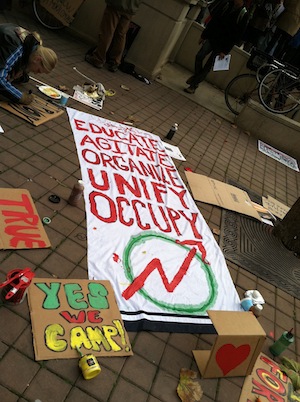 This collaborative, donation-based production ethos contrasts with the for-profit parasite industry that has sprung up over the last couple of years to provide Tea Party demonstrators with “poster kits”; these can be ordered online and delivered by overnight courier to the customer’s protest destination hotel.

The pro bono output of Occupy’s print labs has attracted the attention of major museums and historical societies, including the Smithsonian Institution. Ad hoc venues and formal galleries alike have displayed Occupy ephemera. In New York, the storefront of Printed Matter in Chelsea, for instance, showcased Occupy graphics, as did NYU’s Gallatin Galleries. (Gallatin hosted the unjuried show This Is What Democracy Looks Like.)

Within the Occupy movement, Archive Working Groups have sprung up to assure a measure of narrative self-determination. Due to the practical and ethical issues raised by the collection, storage, and conservation of physical artifacts, digital preservation prevails as Occupy’s preferred archival method.

Occupennial, an affinity group of the OWS Arts & Culture working group, launched one of the first digital archiving projects, Occupy with Art. The site archives Occupy’s creative output and provides a hub for the discussion of art-related actions and initiatives. 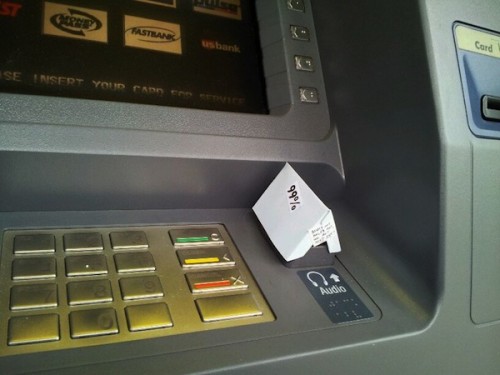 One of my favorite Occupy with Art posts, “Evict Us — We Minify,” called for participation in the Occupy Boston Tiny Tents Task Force. Task force workshops produced hundreds of miniature A-frame tents and pitched them at ATM machines throughout the city.

In the Bay Area, artists and designers have energetically participated in shaping Occupy’s messages and agendas. Artists of the 99%, for instance, loosely affiliates activists working for social justice within Occupy and other contexts. Several arts organizations — including SomArts Cultural Center, Intersection for the Arts, and Southern Exposure — have demonstrated solidarity with Occupy through creative programming. Southern Exposure hosts a roundtable conversation on “Organizing Strategies for Artists” with Artists of the 99% on January 14.