Terry Berlier is an inveterate recycler and a committed anti-consumerist. Her sculptures repurpose and recombine outmoded technologies and salvaged materials to generate new patterns of perception. She is a perfect fit for Recology, where an unusual artist-in-residence program offers unrestricted access to the dump. 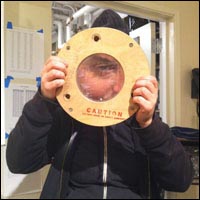 Between October 2011 and January 2012, Berlier’s inventive foraging produced 16 some odd pieces. These were displayed at Recology’s Artist in Residence Exhibition over the weekend. One iconic work, a shopping cart filled with concrete, pays tribute to the labor of moving static piles of old junk into new dynamic scenarios. It could also be understood as a monument to the consequential burdens of commodity culture. Such works, however interpreted, both display and provoke inventive thinking about the way we live our everyday lives and exploit our planet’s finite resources. 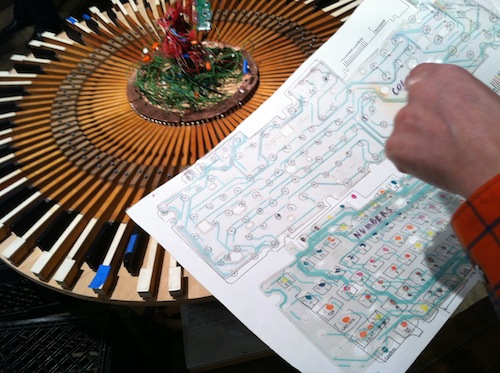 Terry Berlier explains the mechanics of Where the Beginning Meets the End (working prototype), 2012

All of the sculptures Berlier created at the dump establish new terms of engagement with discarded objects and their/our environment. Where the Beginning Meets the End — a piano in the round made out of ivories, an Apple laptop, a Dell computer keyboard micro controller, copper pipe, and a wooden spool — transforms a virtuoso instrument into a musical machine accommodating several players at once. Event Horizon reconfigures wood slats and hardware from IKEA furniture into a kind of kaleidoscope. The viewer helps create a peep show of light and shadow, visible through the object’s aperture, by swinging a lamp suspended overhead. 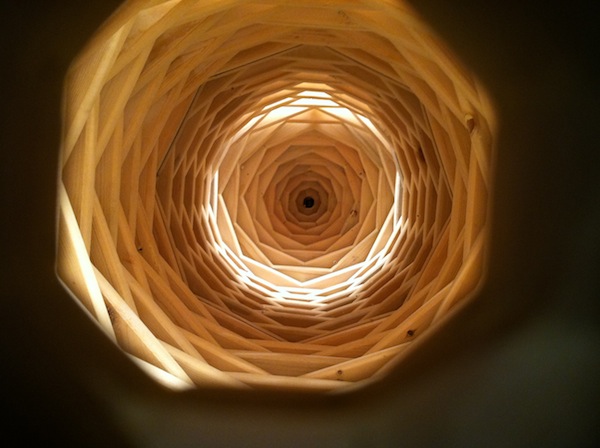 If you missed the exhibition this weekend, you’ll get another chance to witness the creations arising out of this unique site. Since 1990, over a hundred artists have completed residencies at Recology. At the end of their residency terms, these artists share their work with the public in a capstone exhibition. Each also contributes to the program’s permanent collection. Their works circulate in off-site exhibitions promoting recycling and reuse. On its 47 acres, Recology also boasts a vast sculpture garden featuring the work of past artists-in-residence. 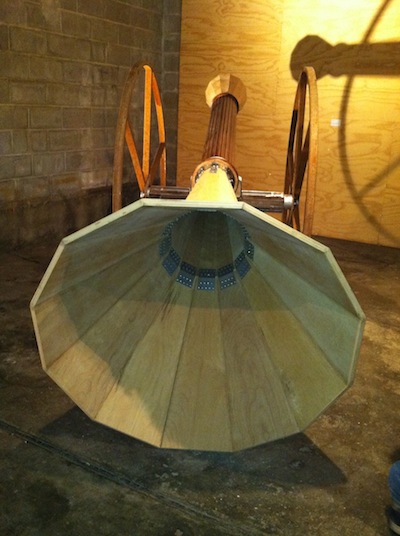 Berlier’s Acoustic Locator (2012) looks like a World War I artillery gun crossed with a giant gramophone. It is based on a contraption devised in the 1890s for isolating and locating sounds at a distance, a sort of acoustic radar.