LUNCH AT THE LANDFILL ~ ~

Laura Owens
When I worked at the Huron County Landfill in Ohio, my job was to weigh trucks in and out, keep a ledger for accounts receivable, and regulate and advise locals on the laws of dumping their trash. In my one and only government job, expectations of me were clean and clear, with an emphasis on stretching the tasks to fill the workday. Breaks were mandatory and extensive: a 9:15 a.m. break, an hour lunch break, and an afternoon break. In mirror fashion to my repetitive and routine job, I ate the same lunch every day: a Lean Cuisine beef teriyaki and rice frozen dinner that I would pop in the microwave on top of the fridge at work. Lean Cuisine is a division of Stouffer’s, the Ohio-based frozen food company that had big ideas in the 1980s. As a teenager, I had gone through several periods of only eating one food at a time — a three-month stint on raisin Rice Krispies treats comes to mind — so this self-imposed restriction wasn’t new. But it nicely completed a routine that was perfectly symmetrical day after day. 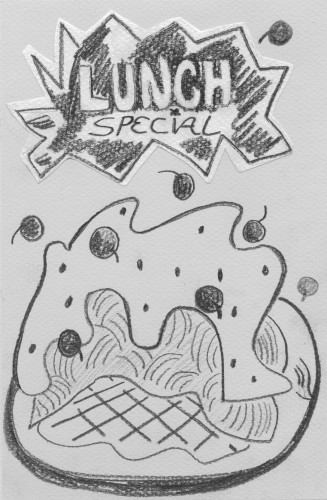 We ate in the mechanics’ room behind the shack where I weighed the trucks. The lead mechanic, the longest-serving government employee on-site and father to one of the other girls in the office, liked to freak me out by opening his coveted jar of pickled pigs feet and popping one in his mouth. Everyone but me seemed to come from a farm, so they were humored watching my face fill with horror.

Unlike any retail or service job I have had since, working at the landfill had a warm and familial atmosphere. We were there to represent the rules, do our jobs well, and conform to a slow pace so as to stretch the work out to the end of the day. I took care not to write too quickly and had the best penmanship of my life.

Sliding open the tiny office window above my desk, I would tell customers whose pickup trucks sat on the scales that they were not in compliance with the law and that I would call the state highway patrol to give them a ticket if they didn’t leave and come back with a tarp on their load.

I watched as people unloaded their trucks with bicycles and furniture, antique windows and doors, all in perfect condition. The Amish would ride up in buggies with their trash. We welcomed the same six guys who were the city trash collectors multiple times a day. A BFI driver we knew drove up with his whole hauler full of packages of Pepperidge Farm chocolate chip cookies straight from the factory. He opened the back of his load and we all took multiple packages while he relayed that they had too much salt. None of us could taste a difference. I was 17.

After many jobs working in retail and the service industry, where lunch was an escape to myself, and to thinking my own private thoughts, I am now alone with my thoughts the whole day. Working for myself in the studio, there is no limiting organization that dictates my hours. Lunch is not something to be savored, but an attempt to strategize what foods will give me the most energy and focus for the rest of the afternoon. It can be a place to rebel against my own tyrannical pressure to produce. More often it is an annoying distraction, something to conveniently forget about. At best, it is a time to regroup and come back to the studio with fresh eyes and ideas. Unlike the government job and my frozen meal that was so comforting and routine in its slow, methodical nature, my lunch break is now stressful, a debate every day of what to eat and how to avoid wasting time.

Laura Owens is an artist who lives in Los Angeles.