Artist Sharon Lockhart reflects on the presence of the individual in the context of industrial labor through film, photography, and printed matter. For Lunch Break (2008) she spent a year at a naval shipbuilding plant in Maine, and the exhibition — now on view — examines the workers’ activities during their time off from production. SFMOMA is also distributing Lockhart’s newspaper, The Lunch Break Times, which relates stories about labor and lunch breaks. Every Wednesday, at NOON, we’re posting one of the articles here.……………………………………………………..

Newspapers these days seem to be for our daily 20-minute bus or train commutes, or for those too-long waits at the bus stop or train station. Or for our lunch breaks. Sure, some people still read actual newspapers, but most of us now feed our notoriously short attention spans by constantly checking our smartphones. There’s no denying that the end of the newspaper as we know it is nearing. But as the newspaper is increasingly becoming obsolete, the Los Angeles–based artist Sharon Lockhart has decided to take a closer look at this medium.

The free copies of the newspaper Lunch Break Times are an extension of the exhibition Sharon Lockhart: Lunch Break. Lockhart and the San Francisco Museum of Modern Art, a fine art museum located in a city that has cut almost all of its ties to its industrial past, including its legendary steel and shipping industry, share with many of the collaborators a desire to understand better what happened to the region’s industrial labor force, what cultures have emerged, what fights were fought, and what rights were gained. The right to a lunch break is a crucial one in this context. To this end, the artist has composed a wonderful menu of voices, stories, and images in a spirit of collaboration and generosity. 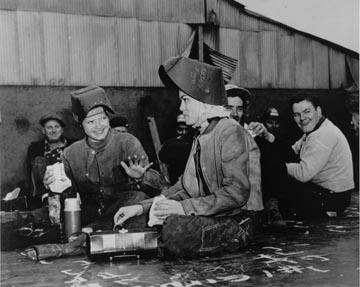 In 2008 Lockhart began a long-term collaboration with the workers of Bath Iron Works, an historic shipyard in Bath, Maine (although Lockhart was born in Massachusetts, she spent much of her childhood in Maine, and her family still lives there). Over the course of one year, she interacted with the workers and gained their trust and collaboration. From this experience, she produced a series of works which include the film Lunch Break, the centerpiece of our exhibition; a series of photographs; an artist book titled Lunch Break, featuring selections from an archive of images she compiled; and the newspaper Lunch Break Times. For the SFMOMA exhibition, Lockhart has created a new edition with a Bay Area twist. It’s a paper not only for your lunch break, but about the lunch break. You’ll find a treasure trove of facts, stories, and even recipes, as well as images, about the lunch break that paints a larger picture of this workday ritual without trying to generate history with a capital H. At the end of the day, we don’t care about capitalized terms like History. We care more about the small things, the individual struggles with being employed or unemployed, the stories of how others cope with the constant change of the working environment — especially here in the Bay Area, which is home to many of the revolutions of the networked society. How does the industrial past of the Bay Area inform our contemporary everyday life? In both the Lunch Break Times and the exhibition itself, Lockhart encourages you to resist the economy of short attention spans by taking your time to read and to take a closer look. In these times of accelerated global electronic communication, Lockhart thus reclaims an older, traditional mode of keeping you informed and entertained. And while the museum has always been part of this electronic revolution — for example, by starting our own “e-space” for online exhibitions as early as 2001 — we, too, think that it’s time to uncover what has been pushed to the side, marginalized, and deemed irrelevant for a master course in art history. This concern, exemplified by Lockhart’s unsentimental yet deeply humane attention to the local and focus on the rarely portrayed experience of the working class, takes on a particular social and political relevance in the context of contemporary global capitalism, war, and economic recession. 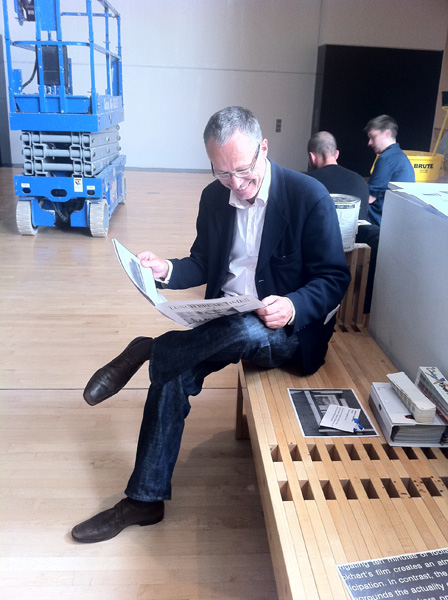 Not coincidentally, Lockhart has chosen to feature on the back page of this paper edition of the Lunch Break Times a photograph of Richmond shipyard workers leaving the factory. This iconic picture symbolizes the achievements of a movement for better working conditions, slightly romanticized by the glistening sun and soft embrace of the Bay Area fog in the background. It is a picture full of references to the iconography of economic and political struggles, even though no actual political fight is depicted: we simply see workers leaving the factory after a day’s work during World War II. This photograph reminds me of iconic images that mark the turn of the century and the political struggles that peaked a few decades later, such as the famous painting Il Quarto Stato (1901) from the Museo del Novecento in Milan, which was immortalized by Bernardo Bertolucci in his epic film 1900, and, of course, Workers Leaving the Lumière Factory, filmed by Auguste and Louis Lumière in 1895. This film is generally considered the beginning of the motion picture industry, and Lockhart acknowledges the impact of this history in her own film Exit. From the history of painting that blends into the history of film to a history of film that is translated back into the painterly still lifes in her photographs and film Lunch Break — indeed, in almost all of her work — Lockhart tries to understand how a site relates to people and vice versa, reconnecting us to a deeper recognition of what it means to inhabit a space, whether it’s the Bath Iron Works, the woods of northern California (Pine Flat), the low-tide clam flats of Maine (Double Tide), or the courtyards of a Polish city (Podworka). Time stands still, and yet it moves, filling our time with a sense of place that is a unique and up-close look at how people work and live.

Rudolf Frieling joined the San Francisco Museum of Modern Art in 2006 as curator of media arts, coming from ZKM Center for Art and Media, Karlsruhe, Germany. At SFMOMA he curated the group shows In Collaboration: Works From the Media Arts Collection, The Art of Participation: 1950 to Now, and Longplay: Bruce Conner and the Singles Collection, as well as monographic shows by Candice Breitz and David Claerbout, among others. He also teaches as adjunct professor at the California College of Art and the San Francisco Art Institute.