STOP IN YOUR TRACKS, YOU PASSER-BY ~ ~

“Stop in your tracks, you passer-by; uncover your doubting head. The workingmen are on their way, to bury their murdered dead.” —Mike Quin, “These are the Class War Dead” (1934) 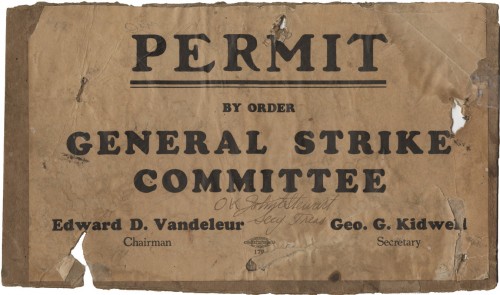 San Francisco’s waterfront was once a gritty working port before it became a tourist destination and home to trendy shops and upscale restaurants. Strolling among the palm trees and street vendors of today, it is hard to imagine that in the long hot summer of 1934, pitched battles took place between striking maritime workers and the police along the Embarcadero, culminating in an historic general strike that shut the city down for four days.

At the heart of the struggle was the dreaded “shape-up”—a humiliating cattle call of longshore workers begging for jobs from corrupt gang bosses each morning. The workers never knew if they’d have jobs from one day to the next, bribery for work was rampant, and anyone who complained about the brutal working conditions soon found themselves blacklisted.

By May 1934, the longshoremen had had enough. Across the Pacific Coast, they went on strike and were quickly joined by their fellow maritime workers. San Francisco became the center of the struggle, led by the fiery rank-and-file activist Harry Bridges. When the ship owners tried to force open the city’s port in early July using strikebreakers escorted by police, the workers fought back and the violence escalated into open warfare on the waterfront.

On July 5, 1934—a day that came to be known as Bloody Thursday—police opened fire on a crowd gathered at Steuart and Mission Streets, killing Nick Bordoise and Howard Sperry. Sperry was one of the striking longshore workers, while Bordoise was a member of the Cook’s Union who had come down to help in the strikers’ relief kitchen. A massive funeral procession was held for the two men, a peaceful and haunting display that left people astounded and crystallized the anger of the city’s working class. The unions called for a general strike and shut the city down from July 16 to July 19. This led to an agreement between the waterfront employers and maritime workers to settle the dispute through arbitration, which ultimately resulted in a clear victory for the longshoremen. In addition to coast-wide union recognition and a 30-hour work week, a dispatcher-run hiring hall was established, which finally ended the hated shape-up.

The 1934 San Francisco General Strike was a pivotal moment in the city’s history, inspiring a wave of labor organizing that dramatically increased the city’s union membership by the end of the decade and solidified San Francisco’s reputation as a union town.

Catherine Powell is the Director of the Labor Archives and Research Center. She serves on the executive boards of the California Faculty Association and the Fund for Labor Culture and History, and is also a delegate to the San Francisco Labor Council.