A Collection Rotation–style post, from one of our curators who really does rotate the collection. Please welcome Assistant Curator of Photography Erin O’Toole.

Soon after the invention of the daguerreotype was announced in 1839, Paris was overtaken by a fever for photography dubbed “daguerreotypomania.” Made the following year, this well-known lithograph (above) illustrates the excitement with which the new technology was immediately embraced. Seemingly everybody was taking pictures of everything from every mode of modern transportation: train, steamship, and even hot air balloon.

While the fervor for photography may have died down a bit in subsequent years, Paris remained one of the most important world capitals of the medium. From Louis Daguerre to Charles Marville, Eugène Atget to Brassaï, and Man Ray to Henri Cartier-Bresson, some of the biggest names in photography have found the city’s openness to diverse forms of personal expression and its great physical beauty to be conducive to making great pictures.

The current installation of Picturing Modernity, an exhibition of photographs drawn from SFMOMA’s collection, is an ode to photography in Paris. It is punctuated by recurring themes of art, fashion, cuisine, and architecture, some of the cultural phenomena for which the city is best known.

One of my favorite photographs in the exhibition is of a crowded restaurant overseen by a frowning matron seated amidst her all-male clientele. Fine dining, this probably wasn’t, but I can’t help wondering what was being served. My money is on cassoulet. 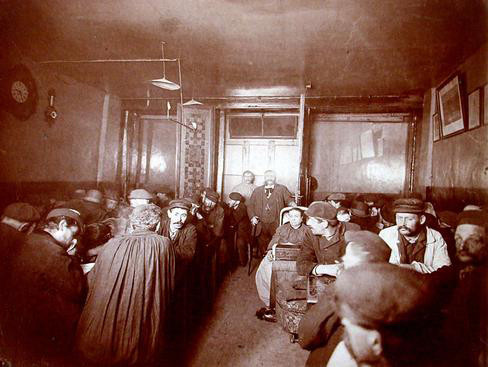 Although the photographer and the date of the picture are not known, it is unlikely that it could have been taken long before 1890, as it was clearly made with some sort of flash. The restaurant itself was gaslit — notice the primitive ceiling fixture hanging off center to the left — but photographic emulsions of that day would not have been sensitive enough to capture this scene in the dim light that a gas lamp would have provided. The picture reminds me of Jacob Riis’s famous flash photographs made around the same time in New York, in this case at an illegal basement bar: 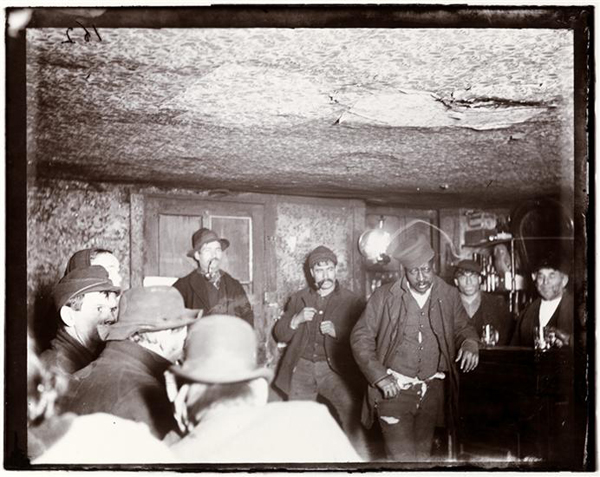 I find these candid shots especially compelling for the glimpse they offer into the lives of working people in the 19th century.

Hungarian-born Brassaï also photographed Paris at night. He captured the mysterious and misty beauty of the city’s empty cobblestone streets in the predawn hours, as well as the exotic night crawlers who wandered them. While prowling the bars and nightclubs of the Montparnasse district, he photographed Kiki, a notorious cabaret singer instantly identifiable by her bowtie lips and dramatically arched eyebrows. 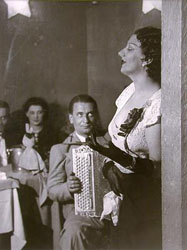 For a time Kiki was the lover and muse of Man Ray. It was her curvaceous figure that he wittily equated with a violin in one of his most famous photographs. Man Ray was one of the leading lights of the surrealist movement, which was born in Paris in the 1920s. Many photographers who have resided in the city since that time have shared that group’s fascination with dreams, subconscious desires, and the uncanny.

For his photographs included in Banalité (1929), a book of poems by Léon-Paul Fargue, Roger Parry — a native of Paris whose name is pronounced “Pa-ree” in French, like his hometown — created elaborate surrealist-inspired tableaux with dark psychological undertones, as in this mysterious composition of a man and a gun. 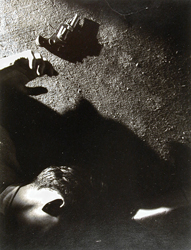 A disciple of Man Ray, Guy Bourdin brought a surrealist sensibility to his work for clients such as Charles Jourdan and Vogue. One of the most celebrated and controversial photographers in the history of fashion, Bourdin was famous for his compositions involving legs and shoes, in this case to the exclusion of everything else. 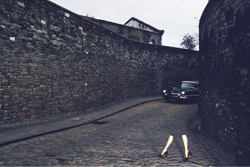 Echoes of the surrealist uncanny are to be found, as well, in Valérie Belin’s discomfiting portrait of a fashion mannequin. At first glance, the picture appears to represent a real woman, but on closer inspection the fake eyelashes and dead eyes give her away. Belin explores in this work the often fine line between the real and the artificial, playing with the destabilizing confusion between the two that photography can heighten. 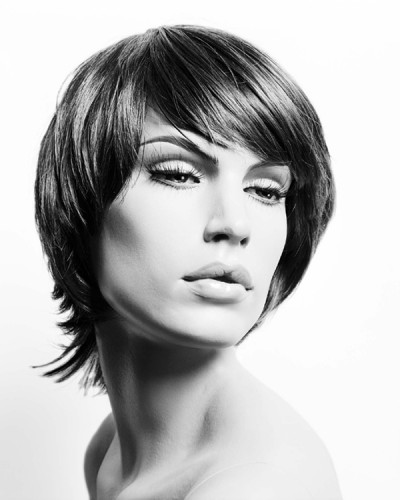 The Paris photography rotation will be changed after this weekend — highly worth a visit, if you have a spare afternoon. — SS