Five questions to SFMOMA artists, staff, or guests. Today we hear from Satomi Matsuzaki, singer from Deerhoof. They perform TONIGHT as part of Now Playing. 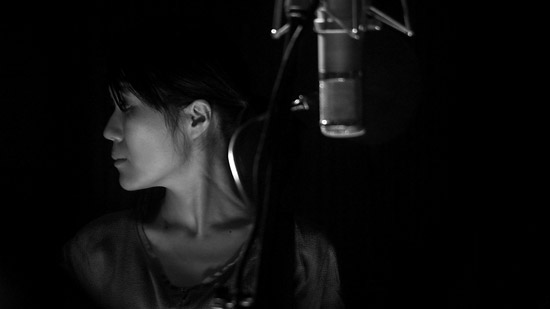 For the past five years, I haven’t been collecting anything. I am fond of lightness and neatness. I like getting clothes, but then my closet gets full so I give away some of my clothes to small friends who are the same size as me. Currently I go back and forth between London and Tokyo, so I need to travel light. It’s so nice to have a few things that I really like instead of many things that I kind of like, but I think I’m just not so attached to things in general.

I would like to invite a Japanese Sumo player to dinner. They are extremely polite and appreciative. I love serving food to people like that. Once I saw a documentary about Sumo players, and they were eating happily. They also say “Gottsandesu!” after meals. It’s a Sumo version of saying “thank you” for food. I just wanna hear the word.

Like I answered the first question, I am not fond of having things, so it’s a tough question. I am very happy that art galleries and museums keep art for us to see. I don’t really want to own them in my place, but if I could steal any artwork, it would be a Concert for Anarchy by Rebecca Horn. This is quite a funny piece. A piano hangs upside down. Every 15 minutes or so all the piano keys fall out, like telling us off. It would be neat to have that in the house when I invite a Sumo player to dinner. He might scream in a low-key voice, and that might create a nice harmony with the piano.

I listen to the noise that surrounds me. I like taking a stroll when I create music. Oxygen is good fuel. When I breathe air deeply, my brain motor starts working. An empty stomach also helps me to stay focused. So my equation for creating music is Noise + Oxygen – Eating = Satomi’s song idea.

I like a soft toothbrush with small head because it’s cute and fluffy.

Tonight’s Now Playing, inspired by Jean-Luc Godard’s film Sympathy for the Devil, includes a screening of Adam Pendleton’s multichannel film BAND, a collaboration with Deerhoof. After that, Pendleton will be joined onstage by David Hilliard, former chief of staff of the Black Panther Party, and we’ll screen new footage of Black Panther sites in Oakland. The evening concludes with a live performance by Deerhoof. Also not to be missed: Beggars Banquet by Blue Bottle on the rooftop and free bites by San Francisco Magazine in the Schwab Room. More here.