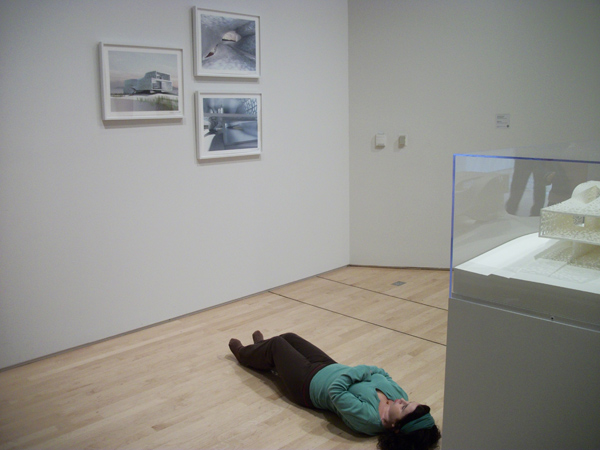 I lay on the floor with the crown of my head tucked against the vitrine which held a scale model of Jellyfish House. An assistant read the Chart Notes from a clipboard. Meanwhile, a messy sheaf of papers was handed to an audience member. This was the Discharge Plan, which quickly became dispersed between different audience members. The Discharge Plan included printed text (typed fragments of poetry written by me or texts quoted from the poets David Wolach and Jack Frost), as well as large sheets of sketch paper with handwritten text and drawings by residents at Laguna Honda Hospital, where I work as a Transition Coordinator. It became clear from the reading of the Chart Notes that audience members were being asked to approach the “patient or resident’s” (my own) prone body and help in the “rehabilitation/discharge process” by moving the body’s limbs, one joint at a time, until she was standing. This part of the performance lasted approximately 10 minutes. During that time, audience participants approached and followed these instructions. The movements did not amount to noticeable changes in the body’s position. Eventually, a participant helped me to my feet and I collected the scattered Discharge Plan from the audience, walked over to my mobility scooter, sat down, and read from the Discharge Plan.

Amber DiPietra is a disability advocate and peer counselor at the Independent Living Resource Center San Francisco. She is also a poet and a somatic writing teacher. Find out more about the classes she offers at Write To Connect.

Tags: Collection, One on One, Pop Up Poets