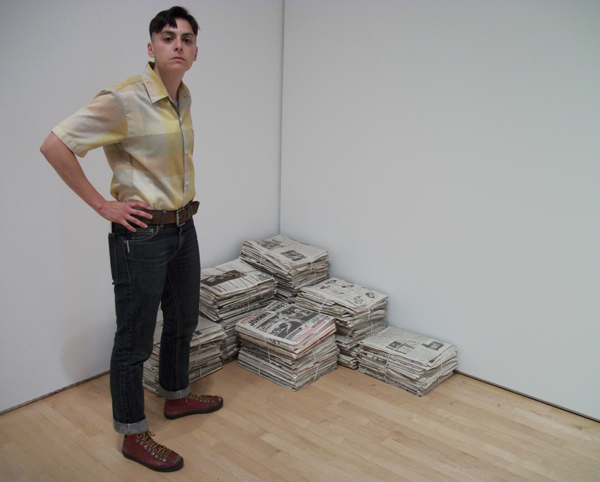 The performance commenced with an introduction read by future Pop-Up Poet Evan Kennedy. Together, Ariel and Evan led visitors on a winding and pause-filled walk through the six galleries leading up to Gober’s work. The script begins: “Enter the gallery and move slowly. Make your feet heavy and precise, like the choreography is just to walk. Be moving as if you’ve decided you are not lost. You are to only look for the piece Newspaper — nothing else should catch your eye …”

Ariel Goldberg is an artist and writer. Recent publications include the chapbooks Picture Cameras from NoNo Press and The Photographer without a Camera from Trafficker Press. “The Estrangement Principal,” an essay on the states of queer art, is forthcoming from Ragtag’s poets writing criticism series in January 2012. More work is online at www.arielgoldberg.com

Tomorrow night: Bhanu Kapil on Jim Goldberg’s Home of a Boy Who Died Trying to Get to Europe, Senegal

Tags: agoldberg, Ariel Goldberg, Collection, One on One, Pop Up Poets