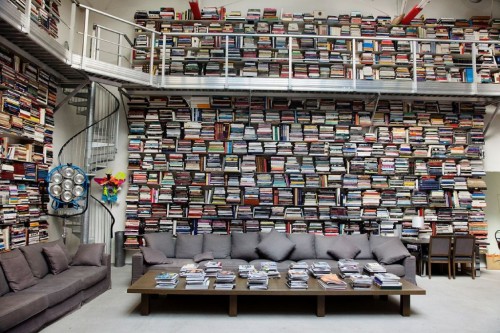 The perennial complaint that SF is a sleepy, culturally deprived town isn’t really holding up these days. Sure, there are deficiencies, but lack of culture is no longer one of them. In fact, I’ve been lamenting the steadily increasing frequency of Saturday gallery openings — as someone working in the arts, having weekends off has its appeal. There are far worse things to contend with in this world, and I’ve seriously warmed to the idea of having pieces of my Saturday and/or Sunday attached to a sense of art community. When it seems like rights and regulations are slipping away on the national front, it’s nice to know that there are impulses of graciousness coursing though our social environment.

As much kvetching as I may have done about the recent art fairs, they were a wonderful excuse to mingle with good people. Last Saturday’s veritable Steinapalooza at SFMOMA was another afternoon with way too many free art-related options. If there were more celebs in the house, this could have been an Artforum Scene and Herd weekend, though perhaps the beauty of what happens in the Bay Area is the fact that all this action happens with more human-scaled fanfare. No publicist implored me to give a shout out to all this activity.

I didn’t make it to SFMOMA until late afternoon (deadlines, inertia), missing most of the Living Room conversations concerning San Francisco’s creative social circles, but when I arrived the museum was buzzing. The salon-style discussions, co-organized by the socially adept Margaret Tedesco and aided by cozy interior decoration, had an intimately focused crowd. In the atrium I heard the amplified voice of poet Cedar Sigo, one of many writers participating in a marathon reading of Gertrude Stein’s Making of Americans.

I slipped into the Queer Culture and Artists’ Circles panel, primarily to hear Wayne Koestenbaum, whose talk last Thursday, “The Desire to Write,” a commissioned response to the Stein exhibition, really knocked me out. His writing is thoughtful and rich, redolent in a sensual form of criticality. (Allow me to register a public request for SFMOMA to make the text available in some form or another.) His delivery and willingness to explain his process was ever so intent on sharing something with an audience, not hold something over it. I wasn’t the only one who left the reading inspired to write, longhand. Even his somewhat terse wrap-up comments at the Saturday queer panel — arguing for the more antisocial but still brilliant artists who can’t be contained within those community “circles” — came off as an amiable intellectual joust. (My estimation of Koestenbaum spiked further when I ran into him in a nearby hotel lobby, catching up with what turned out to be his surprisingly glamorous high school English teacher, a woman who maintains glowing esteem for her former student.)

The Stein events weren’t the only things going Saturday afternoon. Unbeknownst to me, venues in the neighborhood had organized a gallery crawl. On my radar were Stephanie Syjuco’s opening at Catharine Clark, Castaneda/Reiman’s new work at Baer Ridgway, and Ranu Mukherjee at Frey Norris. Their work is wildly divergent, but they’re all artists who have a warm spirit that typifies the SF scene’s sense of community (and all are beloved educators). And their shows were accordingly packed with friends. (It was a good thing that Allison Smith’s Cries of San Francisco extravaganza, which was scheduled for the same afternoon, was postponed due to rain.)

There was an after-party for a couple of the shows, but I opted to go for a quieter drink with a friend. On the way, we stumbled into a soiree for the TEDxSF conference that I had no idea was taking place in Yerba Buena Gardens, seriously adding to the concentration of brain power in one small pocket of the city. The party spilled out on the terraces, and we slipped in through a crack in the barriers nabbing some hearty finger sandwiches and glasses of white wine. Someone came by and offered us bottles of coconut milk, promotional free samples of a tropical elixir that conjured thoughts of a Hawaiian beach.

A guy sat down near us to eat pasta from a biodegradable plate, and he told us about the TED speakers. He spoke of a dance performance with an “It’s a Small World” global vibe, and of a lecture by Nicole Daedone, a major proponent of OM, a sexually driven meditation technique that “combines the tradition of extended orgasm with … Zen Buddhism, mystical Judaism, and semantics.” Normally, I would find this eye-rolling New Age material, but the ensuing conversation concerning “the ecstatic impulse” along with his offer of a Shiatsu wrist massages (a not unwelcome first-one-is-free gesture) was perfectly agreeable. He told us he’s trained in OM, as well as life coaching, and our conversation turned to the idea of abundance as a state of mind: That old power-of-positive-thinking thing. There were clouds in the sky, but while weather reports predicted otherwise, raindrops didn’t fall on our heads that balmy dusk.

I might likely feel less sunny about it on Monday morning (when I have to return to jury duty at an ungodly hour), but this art weekend, at least, was full of hope, ideas, and community in the kind of heaping, organic portions that San Francisco seems to be serving up lately.