This is the latest in a series of observations from the 10th Sharjah International Biennial, Plot for a Biennial. 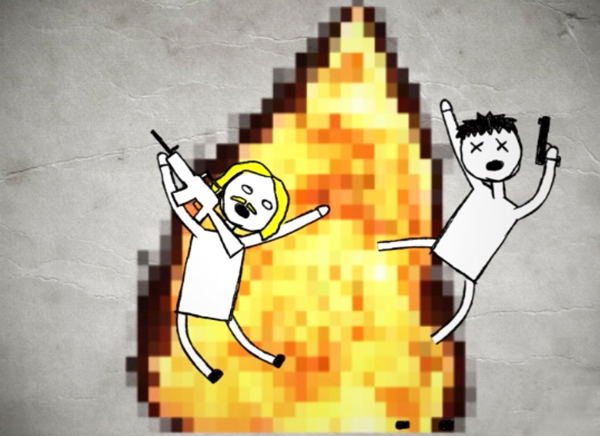 Adel Abidin‘sTheir Dreams is based on drawings from and interviews with children from various locales, including Iraq, Palestine, Switzerland, Jordan, and Finland, who were asked to illustrate their dreams and what they hope to receive from the world if anything was possible. The installation creates a changing narrative, between fairies and rainbows, fantasies of destruction of the world and the disasters of war, using projected animations on six screens, overlapped with a layer of shadows of children playing across the screens.

Abidinbegan his career as a painter. His exploration of methods and media that enable the communication of difficult or elusive experiences has resulted in a practice that also encompasses video, installation, photography, and new media. He has exhibited prolifically in group and solo exhibitions, such as those at the Helsinki Museum of Contemporary Art, the Centre of Contemporary Art in Salamanca, and Location One Gallery in New York City, as well as the 52nd Venice Bienale,with his project Abidin Travels (which was also exhibited in San Francisco in 2008 at Triple Base Gallery as part of Iraq: Reframe, organized byMontalvo Arts Center). His video installations Ping Pong and Bread of Life were part of Time after Time at Southern Exposure gallery in 2010. In 2011 Abidin’s new work will be featured in solo exhibitions in Milan, Paris, and Amman, as well as in the Iraq Pavilion at the Venice Bienale.