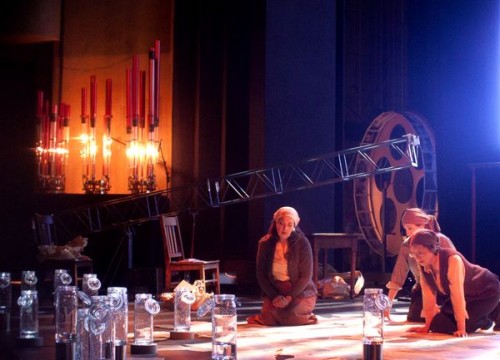 A scene from Trimpin’s The Gurs Zyklus, performed at Stanford University, May 14, 2011

Last weekend, a friend offered me a ticket to see The Gurs Zyklus, a fully staged opera by Seattle-based, German-born, MacArthur-winning, musically inclined installation artist Trimpin. I accepted but had few expectations, though perhaps taste-based trepidations: I’d seen his sound-based installations in the past, just wasn’t sure it would be my cup of tea. Taking calculated viewing risks and going outside your standard range of interests, I find, is a worthwhile practice that I don’t enact quite enough. It can result in a sense of exhilarating discovery, though the sinking feeling of losing chunks of one’s life to half-baked art is the more common result.

The Trimpin piece is an example of an artist stretching out of genre, and perhaps his comfort zones. He’s best known for contraption instruments that make music with drips and other elements, most often in gallery settings. I hadn’t heard much about the theatrical piece, which had something to do with his childhood discovery of a Jewish cemetery and a former concentration camp near his hometown in Germany. Apparently Trimpin was adding “prestige” theatrical narrative and proscenium stage to his repertoire.

Frankly, his experiment failed — from the moment it began there was logy feeling to the staging, which had few visual or musical focal points. It was difficult to tell just what sounds the stage-bound musical contraptions were making. Yet there was something about this production that made the failure forgivable. (LA Times critic Mark Swed offers a particularly generous take on the piece on that paper’s culture blog.)

Despite the fact that sitting through the performance itself was a battle with snoozing, the conversations with friends following were lively. The missteps were as interesting to consider as its firm footings, and pondering how this artist could have more successfully worked in another context gave me the feeling that I had a stake in the work. The Gurs Zyklus was commissioned by Stanford, but it wasn’t billed as the work in progress it clearly seemed to be. That the audience was witnessing creative process in action, something that could be self-indulgent, was actually somewhat satisfying (perhaps I’d feel different if I had to pay for my ticket).

I’ve had a similar thought while engaging in a Netflix streaming film festival of recent works by prolific but uneven French director Francois Ozon. His work is often steeped in the ambivalence of life, in people we remain close to despite their serious flaws. They usually feature compelling (and often sexy) but extremely problematic protagonists whom we are dared to identify with.

While he has had international foreign film distribution, three recent titles didn’t get U.S. theatrical releases — Angel (2007), a Victorian era farce about a grotesquely willful, narcissistic romance novelist; Ricky (2009) a kitchen-sink drama about a baby who sprouts wings; and La Refuge (2009), about a junkie having her dead-due-to-overdose boyfriend’s baby. Angel and Ricky are also forgivable failures. Both were off in their balance of character development and mother issues, but the fact that there is momentum, an artist-in-progress feeling, at least in watching them consecutively, makes them engaging nonetheless. It’s clear that what went into the first two films leads to the success of La Refuge, where the balance is struck with precision.

You’ve also got to admire Ozon for his willingness to engage in more purely entertainment genres, as he does in the still-in-theaters Potiche, the frothy feminist fable with Catherine Deneuve and 1970s design flourishes. It’s highly enjoyable, and more than forgivable for being rooted in the pure pleasure of an artist reveling in his medium.