With the death of perhaps the greatest conspirator of our era, Osama bin Laden, and all the discussion surrounding him, it struck me that America has always been haunted by conspiracy theories and by conspirators. Coincidentally, two nights ago I went to see the film about the so-called Lincoln Assassination Conspirators aptly titled The Conspirator.

The writer of the movie, James D. Solomon, happened to be in the lobby after it was over. Having thoroughly enjoyed it I chatted him up — and mind you, this was before Osama bin Laden had been killed, assassinated, executed, whatever it is they are saying — and our conversation quickly turned to a key metaphorical viewpoint in the film: what the conspirators must have seen from the gallows. The only photographs of the real gallows were made by Alexander Gardner, who had worked as a photographer for Mathew Brady during the Civil War. To make the picture, Gardner was above and behind the crowd looking at the gallows. The vantage point in the film, however, inhabits the Gardner photograph and looks out from it into the crowd. For a tense moment we in the audience get to imagine being up on the gallows with the conspirators, looking at the faces of the people below. It is a viewpoint central to the film, as the main character, Mary Surratt, was shown to not have had a fair trial. In fact, evidence suggests she was actually put to death for the alleged crimes of her son instead of anything she did (ironically, when her son was tried later he was not found guilty and set free). Solomon felt that as she was the first woman executed in the United States, her viewpoint had never been seen before — neither in a major motion picture nor metaphorically in a photograph. Because of Solomon’s insight, her experience was brought to life for an audience 150 years removed from the event. Indeed, walking up the steps and then looking out from the gallows is a view none of us wants to have, but the film takes us there nonetheless. It is understandably uncomfortable and terrifying.

Be warned, though — grim as this might be — as I am writing this the Obama administration is wrestling over whether or not to publish images of the dead bin Laden. Back in 1865 the War Department didn’t hesitate for a moment to publish this image. Gardner made two pictures: one before and one after. In the first one, someone is holding an umbrella over Mary Surratt to shield her from the bright sun, a final courtesy of sorts. To see it, click here. These are examples of early American propaganda, and their message was loud and clear. 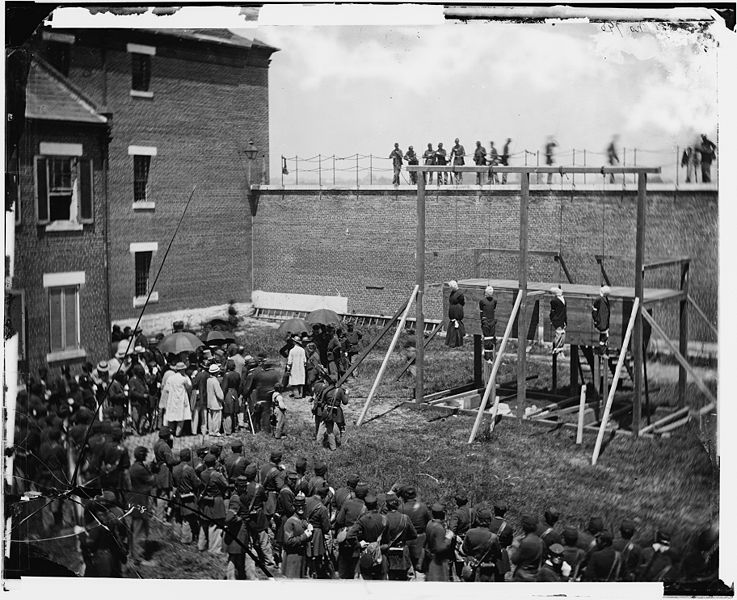