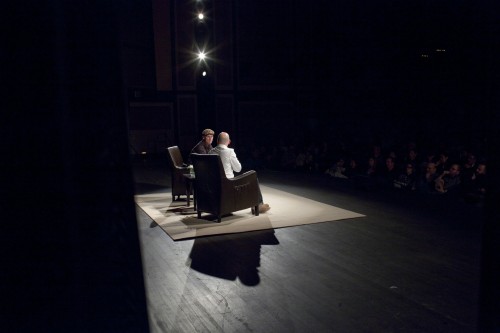 Five hundred people showed up on April 30 to hear Matthew Barney receive a film-related award, talk, and screen the 30-minute Drawing Restraint 17 during the San Francisco International Film Festival. The show was sold out.

I got the gig, at Barney’s request, to conduct the onstage interview. I was honored, though I knew through experience that I had my work cut out for me. His public speaking skills are greatly overshadowed by the scale and ambition of his work — he has a reputation for being a reticent, laconic conversationalist, in public and one-on-one. He considers his answers carefully, which can come off like awkward silences to the impatient. The answers, however, do come. I’d had that observation when I interviewed him in conjunction with two of his SFMOMA solo exhibitions — the first one was in 1991. Funny to realize that even though he has the cachet of being a hip, young artist, he’s been at it for 20 years. Time flies.

I had a couple of months to anticipate the event, to contemplate the oeuvre and formulate some topics, which, as it turned out, would be slipped in to a half-hour window. There’s a lot to discuss — and perhaps a fair amount to avoid. Getting caught in the vortex of his cosmology or probing his biography could be certain conversation killers. But so could overthinking.

I nervously walked to a pre-event reception for Barney (and Frank Pierson, who wrote the script for Dog Day Afternoon). At first greeting my interview subject — dressed in black, workmanlike clothes and cap — there was the awkwardness of encountering someone you don’t know too well. He is, after all, an introverted celebrity, someone who is deeply committed to a personal vision. It seems to take him a little while to warm up, but he eventually does. I had a glass of wine to fortify myself, and on the walk to the theater, Barney laughed as he recalled the Freudian subtext that was edited out of a recently published interview: Something about his mother.

In the theater, we went through some back hallways to the chamber behind the movie screen (we watched the trailer for the Cremaster Cycle from behind, like in the Richard Gere version of Breathless,) and were given detailed instructions and time cues. I sat back there in the dark while Barney received his award — a pointy crystal thing that he joked, in his acceptance speech, that he might sit on. He also gratefully acknowledged his collaborators, revealing his deep commitment to his community. The guy’s loyal.

My nerves subsided quickly once I hit the stage, though I did regret mentioning into the mic that we were in the wrong chairs, as per the event producer’s instructions. The stage lights were blinding enough to obscure the crowd, who probably have a better sense of what the artist talked about — I was a little too concerned about keeping the words flowing. (See Robert Avila’s well observed recap on the SF360 website.) I did manage a jesting reference to the aptness of the award’s name, Persistence of Vision, as Barney, as an artist, is nothing if not persistent: you don’t get to make massive projects like Cremaster without cojones.

A few other things I recall: Barney has noted that he’s never thought of himself as a filmmaker, and that afternoon admitted he feels like a trespasser at film festivals. But I was really surprised to hear him say that Cremaster 4, the first in the series to be realized, was produced for TV, not cinema, an ironic detail being that the works are now only officially viewable in theatrical screenings. 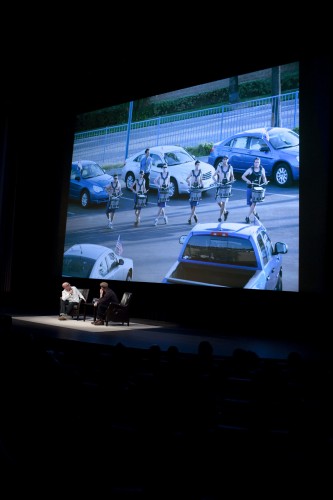 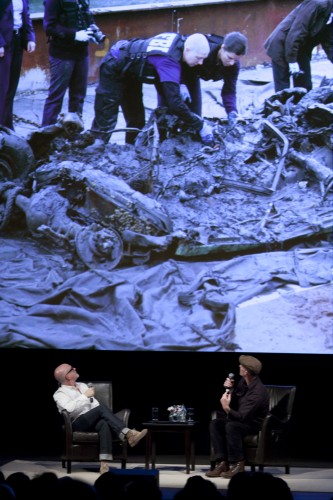 It seemed we’d only just gotten into a groove discussing the two large-scale Ancient Evenings performance projects (REN and KHU) he’s staged in L.A. and Detroit — works that I was lucky enough to attend, and very much bring the role of the audience, and elements of chance, into fascinating relief — before the producer flashed a five-minute warning from stage left. Barney quickly gave an intro to Drawing Restraint 17, a half-hour silent work that is particularly effective at linking his interests in athleticism, sculpture, resistance, and the free-fall of release.

Before the event, I worried that showing a film of this length without sound, to an audience this large, would be an extremely awkward experience, a half-hour filled with boredom, coughs, rustles, and chirping cell phones. Barney admitted before the event that he wasn’t entirely sure what it would be like to screen it this way, be it that the piece was made for an art context, and originally shown on large video screens on the exterior of the Schaulager Museum in Basel, where it was produced.

And while there were those extraneous sounds in the auditorium, the semi-narrative work was mesmerizing. It glided with stunning images of buildings and landscapes, to its climax, during which a blonde woman scales an enormous vertical wall and spectacularly falls from its summit. That climactic moment elicited a collective gasp from the audience — a rare film response that demonstrated that people were along for the ride. The gamble with this theatrical screening paid off — Barney clearly knows his stuff (even if he gets major flak for the plodding pace of his longer works). I looked over at him a few times during the film, his expression was focused but unreadable. I think he was pleased. From conversations with friends following, the audience definitely was.

Back onstage, we talked about Barney’s choice to use a woman to do the heavy lifting, to which he replied that he’s getting older, and his body isn’t what it once was. (He hardly seems feeble.) He didn’t deliver that answer like a punch line, though I did follow up with a question about humor and its place in his work, to which he dryly spoke more of moments of violence and impact, which he uses to punctuate a narrative flow. Audience questions, however, broke the rhythm — they weren’t bad, just seemed to reduce the conversation to small chunks. Emboldened by holding a microphone, I interjected a few of my own questions before calling the thing to a close.

There isn’t much celebrity gossip to report — after the event, while waiting for the festival’s Saab-sponsored driver, Barney politely navigated an interaction with an autograph hunter toting the massive Cremaster Guggenheim catalog before hightailing it to dinner at a low-key Japanese place in the Mission. There he joined loyal California-based friends and long-term collaborators. One of them, his video editor, ordered way too much sushi. And none of us would let the guest of honor pay.