A 21st-century history has big stories to tell, from the Twin Towers to the Asian tsunami; from Katrina to Haiti; from Iraq, Afghanistan, and the War on Terror to the world financial crisis. Told together, these stories can quite easily spell out decline and fall, the spool of the last century’s particularly American progress and prosperity unraveling in calamity after calamity. Trying to imagine recent events, I always think of those big-budget disaster films or video games I don’t understand thrilling to the sight of whole cities flooding, freezing, or falling into a fiery Earth. Our breaking world, only with higher production values when the bomb goes off or the levees break. And like in those CGI- or source code–made hells, it’s hard to find a hero in all the recent rubble; at best, these films, games, and our own reality offer up only a band of stalwarts whose actions eke out a bare survival at best, the hardy few remaining in the end to build a certainly shaky future. The endings reek of and perhaps speak to our own exhaustion, what with new beginnings so hard to imagine nowadays. 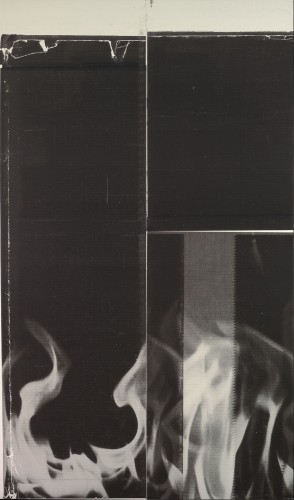 Yet it’s also true that every 21st-century survivor of loss impresses the strength of his or her own story on that of the larger event, from the New York Times’s “Portraits of Grief” series, profiling victims of the 9/11 attacks, to Egyptian protesters sharing their stories via traditional and new media. Pae White’s Smoke Knows is instructive here, as the piece marks that absent smoker who might share, even without knowing it, his cigarette’s trace. Objects, images, and actions — like the people who make them — refuse anonymity now. In The More Things Change, I find myself drawn again and again to this assertion of the individual and this refusal of the mass, a sense that agency and backstory occupy equal psychic and aesthetic space with the thing on view. Documentary-based work, whether Michael Light’s photographs of landscapes cleared for suburban development or Shai Kremer’s of Palestinian olive trees cut for “security purposes,” speak directly to the absent people who will one day move in or who will never harvest what they’ve planted. As a viewer, these scenes call out to me, and I find myself wishing for the in-gallery profile of the missing actors, their film portrait, or the This American Life segment to complement these figureless images-from-the-ground.

The More Things Change speaks to me about the primacy of the figure in contemporary art practice, and the way that figures — or, more specifically, individual people — push through even the most formal of abstractions. The record player in the center of Felix Schramm’s Soft Corrosion, like any record player, needs a person to reset the needle once the side has played. Tom Price’s chairs, regardless of their unique shapes and materials, imply a sitter. Wade Guyton’s Untitled, the flame perhaps to Pae White’s smoke, “form[s] a kind of tug-of-war among the artist, his canvas, and an Epson printer.” As my colleague Gary Garrels points out in a podcast about the show, artists’ processes are foregrounded throughout the exhibition, their working methods “open and available” to public view. Look at Elliot Hundley’s Agave, where the elements suspended from pins present not just the images but the incredible work of fastening and pinning all these things in the first place. Everywhere in the show, small stories of someone, doing something. No heroes, perhaps, but many special agents, acting in their world. 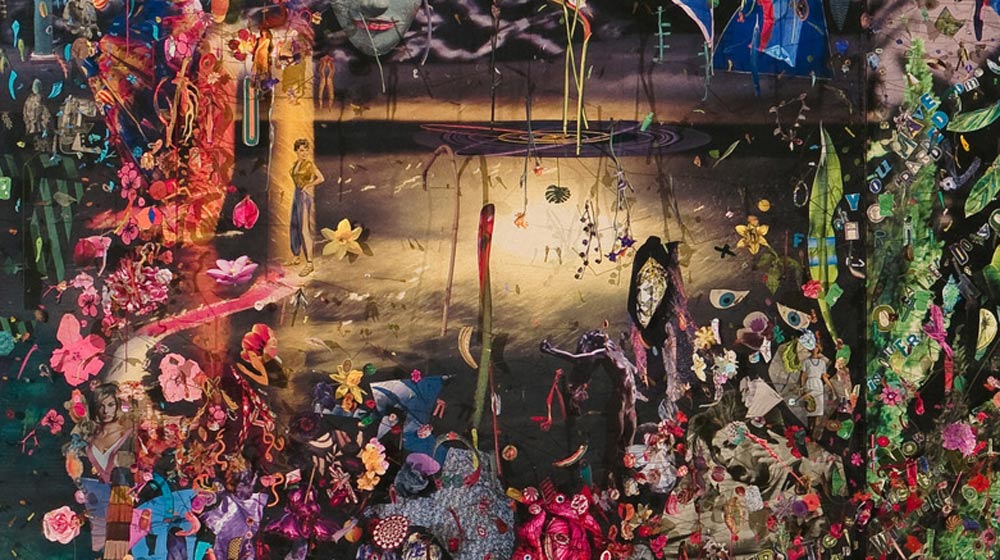 As I weigh the projects in the show I’ve spent the most time with — Stephanie Syjuco’s Shadow$hop, and Syjuco’s installation of Harrell Fletcher and Miranda July’sLearning to Love You More — I can’t help but be struck by all the people whose individual labor makes up both pieces. While each work implicitly critiques the traditional art object — Learning to Love You More inviting the audience to, in effect, be the artist and make the work; Shadow$hop inviting 200 Bay Area artists to sell low-cost “wares” that they don’t consider to be actual “art,” or to stock artwork that can also easily circulate as a product — I find myself less interested in the ways each piece examines art as commodity than the ways they imagine artists as producers. Artists make and do things. Their labor, while symbolic, is also real. The over 8,000 people who responded to 70 assignments in the Fletcher/July piece took the time to transform personal interests and situations into publicly available responses. The artists in Shadow$hop showcase the full range of their production, reminding us just how many little things shadow a seemingly “real” art practice dedicated to gallery-based exhibition. The “guest workers” and behind-the-scenes players making Shadow$hop go are not only performing the function of a retail establishment, they are enacting those moves that make a store function in the first place. A seemingly small action, yes, until you’ve tried on the herculean effort to make even this example of everyday commerce work. 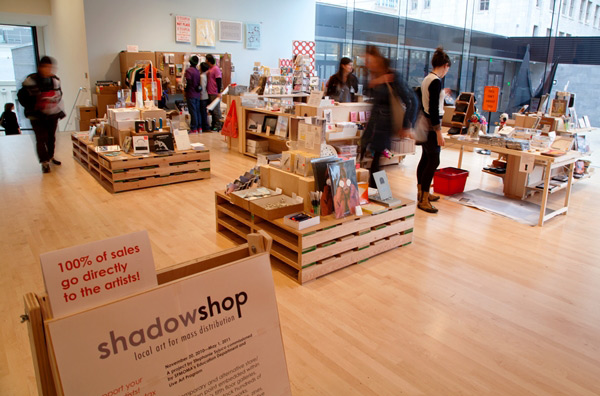 There is something throughout this show about actions and agents of action, about people who are characters in stories they are happy to author themselves. Call it the novelization of everyday life. The tectonic plates might shift, the earth might move, but we are still on that plate and on this Earth. And though our response to the dominant stories of our time may be major or minor, a photo of our parents kissing in Learning to Love You More or a hundred years of utopian clarion calls in Art for a Democratic Society’s Ultimate Manifesto Set (for sale in Shadow$hop), the works call for a personal response and another stretch in our personal story. The artists in this show look to our individual agency and action and in this way provide a counterpoint to a decade of disaster. They remind us that we are not extras in a scripted spectacle but individuals writing our next page. And if this all sounds utopian and social network-y, all people power and mom-and-pop capital and self-organizing societies of free individuals, just remember that next pages are blank, and therefore scary. You have to produce something out of nothing. Thinking about my own life in retail and now in art, I know: making something is a hard slog. My own story to tell. 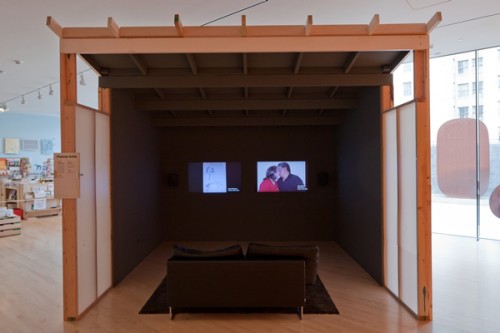 Harrell Fletcher and Miranda July, Learning to Love You More, 2002–9

Frank Smigiel is associate curator of public programs at SFMOMA. The More Things Change is on view on through October 16, 2011. Excerpts from these statements by curators will appear in the galleries at various points during the exhibition.